We’re fast approaching the finale of a Dragon Ball arc, so that means we’re in no better position but to have another rousing round of waiting foe Goku to show up. It’s a tried and tested trope of the genre that isn’t going anywhere, but what’s this? For a change it seems like the warriors of Earth are actually holding their own.

While Moro hangs in low Earth orbit, his army of convict minions spread around the planet causing unrest and looting the planet for all its worth. I really wonder, if Moro’s plan is to just consume everything, of what use is all this wealth going to be to anyone? Unless his followers are all just stupid enough to not realise he’ll most likely kill them all once their usefulness has ceased.

Reading this chapter, I am feeling very heavy shades of the Resurrection “F” story arc from the beginning of the series’ revival. What with the big bad just sitting there and a bunch of faceless minions getting dealt with by the best of the supporting cast on Earth. One reason it doesn’t bother me all that much though is thanks to a few key differences.

For one, the minions aren’t quite as faceless and Freeza’s army. We’ve got a bunch of established characters here, with their own unique traits that make these characters recognisable, dear I say, likeable. The other big reason I don’t mind it is that, so far, the fighters of Earth all seem to be holding their own. 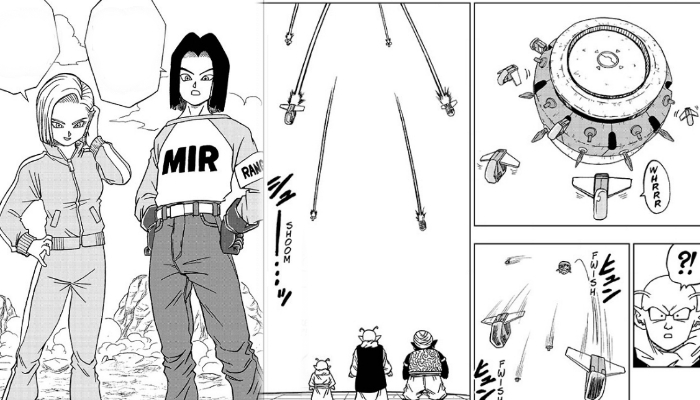 Hell, even Yamcha is present and doing work. Krillin is the only one who seems to be getting the short end of the stick, which something I’ve noticed happening with increasing frequency within the manga continuity.

The big fight though is between Seven-Three and the tag team of Gohan and Piccolo. This fight gets off to a seemingly terrible start as the pair both get their powers stolen right off the bat. While it might seem like another bad situation, thank God the two smartest fighters on the planet actually had a plan for this.

While Seven-Two is a formidable opponent, both Gohan and Piccolo fighting in tandem are actually a lot more than he can handle. With such a long history of one on one battles happening in this franchise, it’s refreshing to see a battle in which two people are fighting together and actually become something more than the sum of their parts. Fusion notwithstanding.

We get to see some new techniques from both Gohan and Piccolo, Gohan using some kind of energy disk shield and them both using a combination version of the Makankosappo (Special Beam Cannon). Together they take the alien android apart and force him to make use of his trump card again, Moro’s power.

Only, he gets outplayed again thanks to the sudden appearance of Androids #18 and our MVP #17. Since the Tournament of Power, these two have become vital parts of the Dragon Team. This time their lack of Ki and infinite stamina making Moro’s power all but useless against them.

Once Moro enters the battle, I’m sure that these fighters all get kicked the kerb pretty spectacularly. Despite the fact that, after his performance in the ToP and his unique physiology, Android #17 should actually be the one person on Earth who can probably give Moro a good run for his money. I mean, he is arguably stronger than Gohan these days.

Just like with Freeza in his first resurrection though, it’ll eventually come down to just Goku and Vegeta as the last line of defence. Speaking of which, we see little of the two Saiyans during this chapter, as Vegeta is still struggling to mater his new power on planet Yardrat, and Goku is utterly lost in deep space.

While Goku’s appearance seems kind of doubtful, Vegeta is fully aware of what is happening on Earth and is holding off going to Earth until the very last minute. Because, thanks to the Yardratians surrounding him, he is a single heal and instant transmission trip away from joining the battle.

While I would love for this to be an arc where Vegeta finally get the victory and it doesn’t just come down to Goku again. If I were to put my money on something happening though, the more likely outcome I can see is Meerus returning to the fray in some way, either helping Goku get into the fight, or actually fighting himself. I can fully see Meerus saving the day in some respect, fully content with getting erased by Grand Priest for interfering in mortal affairs.

I liked this chapter a lot, especially all of the battle with Seven-Three and I’m super interested to see how things turn out from here.