This entire chapter pretty solely covers the beginning of the battle between Goku and Moro. After the last part, we learned that Goku could now activate the black haired version of Ultra Instinct, now called Sign, at will. The questions left were whether the form retained its weaknesses established in the anime, or if the manga would change it slightly like it did so many things during its interpretation of the Tournament of Power story arc.

Right from the get go, Goku starts using techniques we don’t normally see from him. He starts the battle by whipping a ton of air blasts in Moro’s direction by snapping his fists at high speeds. Techniques we previously associated with Jiren. Only this is on a much lower level than when he was doing it. In the anime, the biggest weakness to UI Sign was that, while it allowed for almost flawless defence, it basically gimped the strength of the user’s attacking ability.

That seems to be true here as well, Goku is apparently compensating for to some extent by peppering his foe with a ton of attacks, taking a quantity over quality approach to the battle. The fight seems pretty even to begin with, as Moro’s magic and more tactical approach to combat by using said magic allows him to throw Goku for a loop on several occasions. Although he doesn’t seem to do any lasting damage when he does so.

Goku does seem really gain the upper hand when he displays his apparent ability to avoid Moro’s energy absorption technique, which was the bane of his existence during their previous encounter. I’m not sure that was exactly how the Moro’s power was established previously. Last time it just seemed like standing on the same planet as him would cause your energy to drain, but I guess they’ve just changed that rule.

When the fight really starts to look like it’s in Goku’s favour we cut to Beerus’s planet. Thus revealing that Beerus and Whis are there and are aware of what’s happening in their universe. And we still don’t really get an explanation as to why Beerus hasn’t intervened and stopped the single individual devouring and destroying countless planets within his universe. I mean, I’m sure we’ll get there eventually, but it still seems like a big plot hole to me.

Anyway, Meerus is also there and Whis compliments him for how expertly he’s trained Goku. He then enquires about whether Goku has mastered the full form of Ultra Instinct, to which Meerus says no.

Back to Moro, who is laughing about how many planet’s worth of energy he’s absorbed at this point, and then powers up. Claiming that he’s stronger than the gods now, meaning he could possibly be stronger than Beerus now? And maybe that’s why the God of Destruction has decided not to intervene.

Powered up, Moro seems like more than a match for Goku and knocks the Ultra Instinct out of him. Whis points out that Sign is a form meant to be a gateway into true Ultra Instinct, thus takes an incredible amount of stamina to maintain thanks to how unstable it is. Guessing this, Moro needed to simply wait Goku out until he used all his stamina. Meerus asserts that Goku needs to manage his remaining stamina to beat Moro. 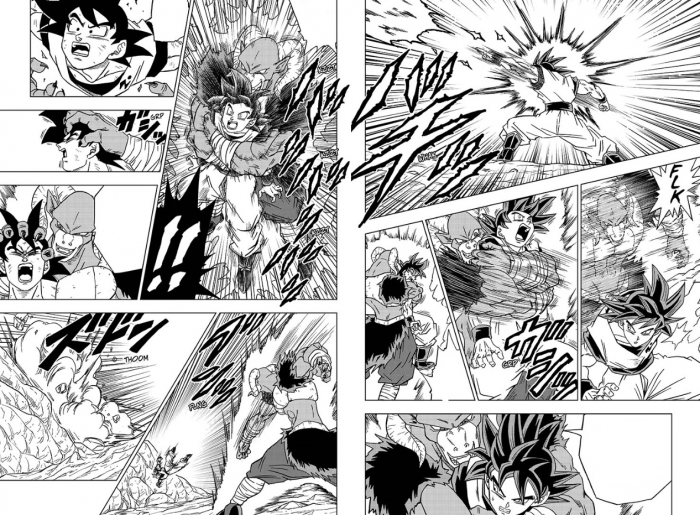 Goku, however, has another plan and powers up to Sign again saying he’s rather just go all out to defeat Moro, ending the chapter.

This fight has not gone the direction I was expecting. I’d assumed Moro’s absorption magic would prove more tricky than even Ultra Instinct could deal with and that’s how he would defeat Goku. Yet, he instead seems to just be out powering him, which is far less interesting. I mean, the big advantage of Ultra Instinct making you impossible to kit is all but gone from this fight. Just taking away what was cool about UI in the first place.

The power creep in Dragon Ball needs to stop crawling up soon, in part because they’re going to make it more and more difficult to find new enemies without it feeling trite, and also to justify how Vegeta is going to show up next and be able to put an even better fight against Moro than Goku did, while using Ultra Instinct.

Ultra Instinct was supposed to be the pinnacle, the absolute peak of power a martial artist could reach, if Goku could be using some form of it and still get defeated by Moro, how much stronger did Vegta get? I still kind of think Meerus is going to be instrumental in the final defeat of Moro rather than Vegeta doing it on his own, but my predictions have proven wrong at nearly every turn so far, so I guess we’ll have to wait another month to see just how this battle will conclude and see Vegeta make his grand entrance.