I wasn’t originally intending to do episodic reviews of any shows this season, but what with My Hero Academia over, I needed something new to occupy this slot, or I would when I used to have more structure to my weekly uploads. These day I’m just chucking stuff up whenever. I mean, you’re getting a Saturday upload this week. It’s outa control!

Today, I’m going to talk a little more in depth about episode 4 of pretty much the only new seasonal anime still airring, and pull my hair out as I keep asking I’m not sure are meant to be asked of Tower of God.

Bam’s primary drive for entering the tower from whatever cave dimension he comes from was to find Rachel, and will you look here, it’s been three episodes and he’s already found her. Or so he thinks, after calling out to a hooded girl across the way and not getting a response, he can only surmise/hope that this girl isn’t the Rachel he’s looking for.

Because, if it were her, she would surely respond to him, right?

Back to the action though, Lizard Girl now sits with the crown atop the throne in this King of the Hill style game of death, the winner of which will be rewarded with some kind of pass that gets them straight up the tower.

I really like the trio of Lizard Girl, Androgynous swordsman and Laundry Day Lupin. Even though the track-suited guy, I think his name is Shibisu seems very normal compared to his to powerful team mates, there seems to be more to him than meets the eye. I’m going to start feeling like a smart-arse if I keep making the comparisons between this show and Hunter X Hunter, but I’m just going to say it;

He reminds me of Leorio, there I said it.

At the very last second, two more teams enter into the arena, putting Team Lizard Girl (Anak) in a 2 vs 6 situation, as Anak herself seems pretty content to doze atop the throne. While the swordsman always seemed like one of the toughest combatants present amongst the characters we’ve seen so far, surprisingly Shibisu manages to hold his own against two of the more normal “Regulars”.

And here’s the point where I start to twist my nose and start asking a ton of questions of the show rather than just watching it. As I mentioned before, it’s already thrown a ton of half explained proper nouns at us, as well as introducing a power system which will undoubtedly become a more major factor as the story progresses.

So how do the other people with seemingly magic powers fit into this, like the guy who can ignite his fist ablaze? And these swords that seem to be another important plot point on top of not-Nen and the balloon men and gargoyle people. All questions I’m not sure we’ll ever get answers to, or even if they’re important.

The battle escalates through, as the sleepy guy who has been shuffling around in the background for the past few episodes finally perks up and starts using this water based power called Shinsu, causing Anak to freak out and her sword to turn into a giant vine/tentacle whipping monstrosity.

Which in turn causes Bam’s sword to freak out. Thus we get new term to add to the collection; a weapon ignition. The connection between the two weapons gains the attention of Anak, who suddenly forgets all about the game and crashes through the cage door, willing to kill Bam to obtain the sword.

Cue another info dump. So Anak is a Princess apparently, like Yuri was who gave Bam the sword in the first place. This throws more questions into my brain as to what a “Princess” is exactly, as I’m starting to think it’s more of a rank than a position of birth. And how exactly do Princesses stack up to Rankers like Lero ro, because Yuri seems to have access to the background areas of the tower, while Anak is taking the tests and acting subservient to Lero.

Before that can sink in though, we’re told about these two swords; the Black March and the Green April, part of a thirteen piece set, all made for use by the Princesses. Thus she’s not pleased that one of the swords is now in the hands of Bam. But is stopped from doing anything about it when Hisoka with a hint of vanilla steps in, thus she makes a bet with Bam telling him to win the crown game. With the winner getting possession of both swords.

Her teams is out by the way, disqualified for smashing and entering Bam’s Team’s waiting cage.

Before Bam can have a strong opinion, Rak and Khun make his choice for him, entering the ring to battle for the now unworn crown. Along with four other teams who fancy their chances now that the insanely powerful lizard girl is out of the game. It makes you wonder how these comparatively normal people hope to actually succeed in ascending this tower with these kinds of monsters right from the first step.

Speaking of which, Khun is apparently a badass. Surprising nobody. He’s got some kind of wind powers, super speed and a magic satchel thats acts like an Animal Crossing pocket. Khun is more Killia-like than every before, and just relishes toying with the other teams and forcing them to fight over a fake crown while he plops Bam on the throne.

The episode ends with the mysterious team containing Rachel preparing to enter the fight, with Rachel herself seemingly completely unconcerned about the prospect of killing Bam. By the way, this team were brought in from another testing location after they killed the 397 other participants in their first test. So they’re monster strong we have to assume.

I do like this show, it pushes all the right buttons when it comes to this kind of shonen. But it’s throwing so many concepts at the audience in such short order. Between Shinsu, these swords, the nature of what Bam is, Princesses, Regulars, Rankers and whatever it is Khun us doing, I’m getting a little frustrated with how much it’s leaving half explained. 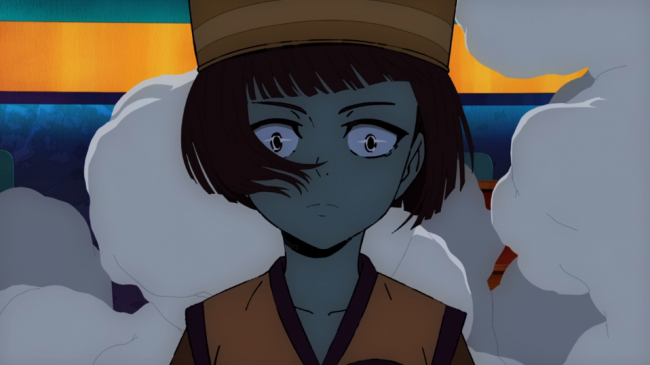 Then again, if it drew it all out to explain everything I wouldn’t be happy either. At the end of the day, explaining it all might not be important, and in the end you’re supposed to care about the characters and their journey rather than if what they’re doing makes a damn lick of sense.

The Jojo’s approach to storytelling rather than the HxH one then.

Most of my complaints are just me overthinking everything I’m seeing on screen. In terms of action, character drama and animation. The show it top notch and I’m looking forward to seeing it get into a groove in the coming episodes.

One thought on “Tower of God – Episode 4: The Green April”