Those poor Namekians just can’t catch a break. No sooner than Moro, our planet consuming warlock, manages to escape Galactic Patrol custody, then he’s off to drink some slug people.

The chapter begins by giving us some more insight into Moro after Goku’s shocked reaction that ended the previous manga chapter. While he doesn’t necessarily have a powerful ki, Goku describes his energy as “a whole lot of people screaming in pain.” which is pretty grim.

Moro is certainly bad news, but we knew that. Having broken out of prison with one of the members of the original Freeza force, the pair make their way to Namek in order to use and abuse both its population and their Dragon Balls. It’s nice that we’re getting a back to basics dilemma involving the Dragon Balls themselves again after all this time.

If I had to take a wild stab at things, I’d assume that Moro is going to do a King Piccolo and wish himself back to the prime of his youth, take a few million years off his odometer. With no time to lose, Goku and Vegeta ditch the Galactic Patrol and use instant transmission to intercept Moro on Namek.

Moro doesn’t seem overly concerned with the God powered Saiyans who stand before him and shows them just what he’s about by telekineticly grabbing a young Namkeian and attempting to consume him.

He is prevented from doing this by Vegeta though, who announces that he owes the Namekians a great debt, seeing as how he murdered a whole village of them the last time he was on their planet. He has some making up to do. He’s a good guy now. Moro finds this all highly amusing and proceeds to hold his own against Super Saiyan Vegeta, bouncing around like a frog to avoid the Saiyan’s attacks. Once Vegeta turns on the red, the fight becomes more one sided.

Back on the Galactic Patrol ship, Jaco and Meerus debate whether they should go to New Namek to help Goku and Vegeta. Meerus decides it more important they return to HQ and continue to try and separate the Great Lord of Lords from Majin Buu. With Meerus being very doubtful that there is anything the Saiyans can do to defeat Moro themselves. And considering this is very early in the arc, he’s probably correct.

The Chapter ends with Moro still not especially flustered by a Super Saiyan God beating him down and sheds his cloak, revealing his skeletal frame, threatening Vegeta to witness his magic.

This a pretty action heavy chapter, the second half focusing on much of the battle between Moro and Vegeta. As is Dragon Ball tradition, I foresee Vegeta getting jobbed out in the upcoming part, which will also continue the trend of both Goku and Vegeta are getting caught out by people lately who don’t rely purely on combat strength.

I’m enjoying a story that seems to be going back to the older tropes of Dragon Ball, involving the Balls themselves, and with Beerus and Whis nowhere to be seen. As it feels Beerus could most likely end this threat almost right away if he were present. 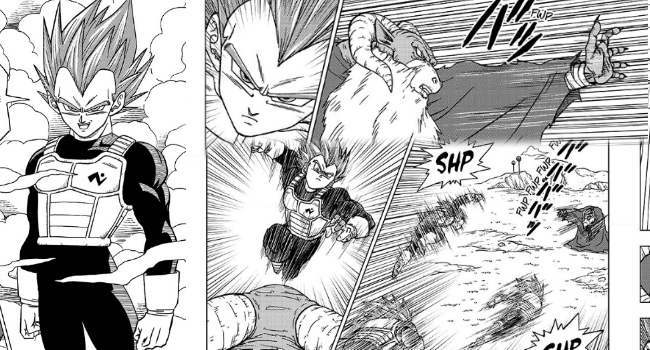 That being said, Moro is being hailed as a very powerful magic user, and I wouldn’t be surprised if he is powerful/sneaky enough to trap/seal the God of Destruction to prevent him from being a factor in this story.

I am very interested to see where this goes, it’s a nice change to be getting a very cerebral villain in Dragon Ball. Not just that, but an actual villain with some actual stakes to events.