God Damn it Goku. If you’re going to get all righteous about someone sacrificing themselves for the greater good, you can’t just go and change your mind halfway through. I know Dragon Ball never makes these things easy, but come on…

If there’s one thing I’ve felt that the Dragon Ball Super manga has failed to pull off in comparison to the anime, it was its realisation of Ultra Instinct. For the many problems the anime had, it did do some things well and amongst the best of those was how it made Ultra Instinct feel exciting, important and Hype AF.

In comparison, Ultra Instinct in the manga never really felt like anything other than another transformation. One that Goku couldn’t use for very long. I already wrote about how the Tournament of Power failed to capitalise on the best aspects of the anime, and then how this very arc of the manga reduced Ultra Instinct, even more, when Goku was using Sign against Moro and it being utterly ineffectual.

This chapter, thankfully, rectifies this by making Ultra Instinct about as cool as it’s ever been within the pages of the manga with Goku achieving the mastered form for the second time. Finally doing it some justice while also mixing a bit of classic Goku stupidity in there.

The chapter begins with Goku angry, not at Moro but at himself. It’s something of a small revelation for Goku that the Galactic Patrol are, despite their goofiness, a force for justice in the universe. In a scene that has some small parallels to his very first Super Saiyan transformation, however rather than give into his rage, Goku becomes more tranquil and  contemplative, asking Jaco why he joined the Galactic Patrol.

It’s dangerously close to a piece of character development for Goku. With him coming to some small realisation that every problem Earth has faced in Dragon Ball Super has come from his own insatiable thirst for a good fight, no matter the consequences. Really trying to embody Meerus’s values and live up to the patrol symbol on his Gi. 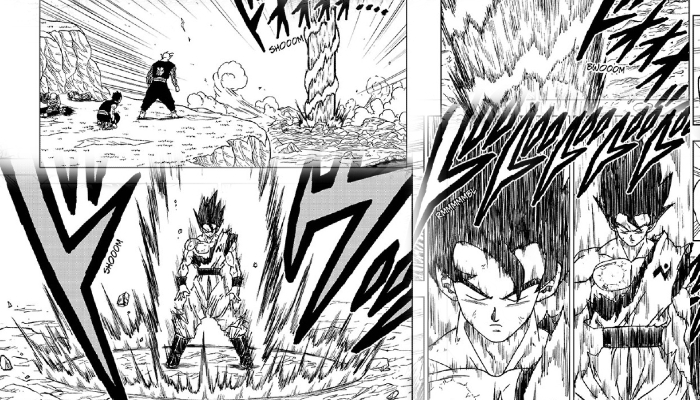 From here we get some absolutely killer visuals in terms of Goku’s transformation into Ultra Instinct perfected and the “fight” that follows. That first time Goku uses Ultra Instinct Sign against Jiren in the anime has become one of my favourite Dragon Ball moments ever, Goku’s almost effortless taking apart of Moro here, as well as the Goat man’s instinctual fear of him from the get-go, is as close to that moment as the manga has achieved for me.

All culminating in a gut punch of a scale that would even make Saitama blush. Full points to Toyotaro for this fight sequence that really captures the economy of movement from Goku while also emphasising the overwhelming power behind each flicked wrist.

It’s a fight that Goku has very obviously won. But then this is Dragon Ball, and things are never going to end that easily. They never have, and they never will. In what has become one of Goku’s biggest Achilles’ heels since he becomes an adult, Moro begs Goku not to kill him. A move that, while it tends to work out in the long run, usually makes the good guy’s lives much harder in the short term when it comes to Goku letting people go.

The final page shows Goku confirming that the Galactic Patrol had sentenced Moro to death. And then subsequently tearing off the remains of his Gi bearing the Galactic Patrol symbol and saying he will continue fighting Moro “as an Earthing from here on”. Goku… the fight’s over. You’ve already won.

Like Beerus, I have a bad feeling about this. And I can certainly see things getting worse one last time before they get better. I wouldn’t be too annoyed by this, seeing as this is the route that all Dragon Ball stories take as arcs end. Except for the fact that the event that kicked this chapter off was Goku being self-reflective about Meerus’s sacrifice and the Galactic Patrol’s dedication to peace and justice.

Now that he’s winning, he’s regressed back into the modern, selfish Goku who just goes and does whatever the hell he wants all for the sake of his own personal self-gratification. I don’t feel good about it, especially after Meerus’s final speech. And while it’s a time-worn trajectory used by Goku (and Gohan) when he’s on the verge of defeating any given villain from the time he was an adult, I get more exasperated by Dragon Ball the more it adheres to its tropes.

This was a good chapter, Ultra Instinct Goku taking Moro apart was as cathartic as it was visually impressive. And we still don’t know how things will pan out, but right at this moment I’m annoyed with Goku. Ripping off that Galactic Patrol logo feels like a dick move considering the personal revelation he made regarding their absurd bravery and morals despite being grossly outmatched most of the time.

I am still very eager to see where this arc goes though, and I really hope Vegeta can still contribute considering the little arc he went though during this story line. Which might happen because I can certainly see Goku’s silver hair crapping out on him before the conclusion of the next chapter.