This will be the last time I act all smug because I called the path of this story months back, because the more I thought about how this went, the more I realised that if even my dumb ass could see this path ahead; then maybe the Moro arc hasn’t been a tale worth telling. Although I’m not sure that’s an assessment I can feel good about until it’s over and done with.

Just to be clear, I’m not genuinely down on this chapter, nor this arc of Dragon Ball Super. It’s just the series of little realisations I’ve come to over the course of reading this story that cause a sense of irritation within me. Once the arc is all over and done with, I’ll probably spend a lot more time getting deep into my thoughts on it overall.

In regards to this chapter though, the events can be summarised thusly: Merus shows up and sacrifices himself to give Goku the edge in the final battle.

But let’s not be too reductive about it. The chapter opens as Merus has just shown up, allowing Whis to whisk Goku and the gang away so that they can be healed by Dende. While this is happening, Merus decides to buy some time battling Moro. Just as he’d been doing during his time in the Galactic Patrol, Merus fights Moro only using tools and his Patrol arsenal, all while avoiding making use of his deity powers. Even without them he seems like a match for the Goatman.

Beerus and Whis, content that the gang are getting healed by Dende decide to leave and head towards Bulma’s for some food. When Beerus realises Merus isn’t with them, Whis plays coy, as he is prone to do. It seems like the senior angel is well aware of what Merus plans on doing.

Although I’m still kind of curious as to why Beerus is just allowing Moro to roam around the universe and destroy planet after planet, they don’t even give him a throwaway line to justify someone else doing his job for him. I’m still not sure I exactly understand the role of a God of Destruction in this Multiversal hierarchy.

With Goku back on his feet, he rushes right back towards the fight. Which seemed to be part of Merus’s plan from the start. Although Goku just rushes in with Ultra Instinct Sign, which once again has lost all of its unique dodging properties and has just become another transformation. One that proves futile against this even stronger Moro.

When Goku voices his frustration at being unable to fully utilise Ultra Instinct, Merus tells him he already has everything he needs. He just requires one last push. Before he can explain himself though, Moro tries to grab the back of Merus’s neck to absorb his abilities. Something Merus put’s a stop to right away by using his Angel’s Staff. 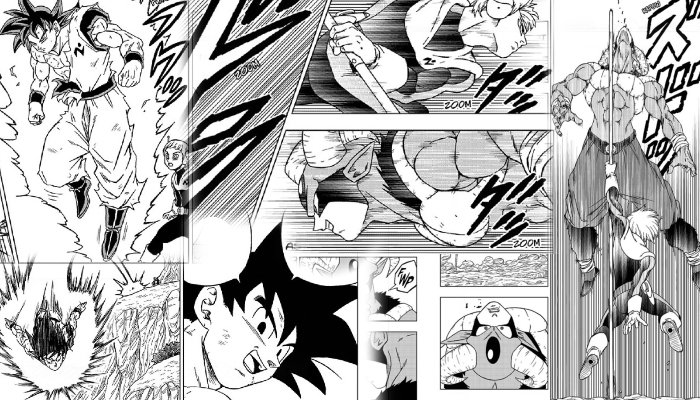 It’s at this point that Merus’s plan become apparent. With Goku now present, he begins his final speech. He shares that, while his role as an Angel requires him to sit by and watch as the universe is ravaged or destroyed, his time in the Galactic Patrol taught him something; a sense of justice.

The rest of the Patrol, even knowing they pale in comparison to many of the threats they face, still struggle to do their jobs anyway. No matter how outmatched. While giving this speech, he begins using his Angel powers to seal each of the jewels on Moro’s body he took from Seven-Three that allow him to copy powers. All while showing Goku that he’s willing to do what he believes is right, despite it meaning his very existence.

As Merus begins to fade away, he thinks back to his time training with Goku, who admitted that he doesn’t let bad guys live because he thinks they’ll reform themselves, like the Galactic Patrol try and do. But he’s just happy to beat them up again and again until they eventually decide to join the good side. Goku’s painfully dopey mantra of simply wanting to fight strong guys inspiring yet one more individual.

Merus lands one final punch onto Moro, blasting him into the dirt and fully sealing the goat man’s copying abilities. As he totally fades away into nothingness he tells Goku that he has the power to achieve Ultra Instinct, and when doing so, it’ll be far more stable than ever before.

His final words being for Goku to protect the Galaxy, doing so with a smile on his face.

I came to really like Merus throughout this story arc, it ended up being his story in many ways. One that once again highlights the folly of the God’s roles and how they operate. Although what does surprise me is how him using his angel powers on a mortal caused an almost instantaneous act of him fading into nothing. I thought the Grand Priest would have shown up to do the deed himself at the very least.

As this chapter ends, it looks like Goku is about to achieve the full Ultra Instinct again, and use it to put an end to Moro. After Merus’s sacrifice, which I felt was well executed, I can see it as a pretty great way of pushing Goku over the edge into the form he needs. I just hope that the next chapter continues doing it justice.

As things stand, I’m still kind of salty that Vegeta has once again been screwed out of any satisfaction or victory after much of the arc building him up and making him seem like the one who would finally be getting the victory. Only for him to get tossed aside and for Goku to once again save the day. Even during my predictions, I thought at the very least it would be a combination effort between Goku and Vegeta, along with a Merus assist.

This story only has a couple more chapters in it. So I’ll be back next month to see if Ultra Instinct can actually get the job done this time, or if something else will end up going sideways.