We open on a scene that shows us Yoshino does actually have some friends, although they bail on him pretty quickly when some highly violent school bullies show up. I swear, I try to push high school out of my mind as much as I can these days, but I don’t remember it being full of downright psychotics like this.

I mean, yeah this is an anime about literal monsters made of negative energy murdering people. But I dunno, there’s something about the extreme violence high school students use in their bullying of one another and get away with it scott-free really bugs me for some reason.

Cut to the present and Mahito is showing Yoshino around his sewer museum of monstrosities, complete with examples of how grotesquely large and how shrivelled up and tiny he’s managed to transform his human test subjects into. And it is me, or does the big one just look like King Zora from Ocarina of Time. Anyone? As grotesque as all of this is, Yoshino seems pretty indifferent to it all. Being an edgy teenager with all of the empathy beaten out of him by his peers seems to have causes him to lose the ability to give a shit about total strangers being murdered.

The pair of them have some kind of philosophical debate about how best to be detached from the remainder of society with Yoshino striving for indifference as the highest virtue… I mean, wow. That’s a pretty lonely existence to strive for. Meanwhile, Mahito is just a psychopath, who sees all life as part of a big cycle. One in which death is inevitable, which means its okay for him to do whatever he wants because everyone’s going to die eventually anyway.

We don’t see the conclusion of this meeting, but it appears that Mahito did “something” to Yoshino, either unlocking some kind of curse power within him or simply allowing him to realise what was there all along. Giving him the power to do whatever he wants, like murdering the bullies who have been giving him a rotten time for example.

Luckily, or maybe unluckily, Itadroi and his driver Ijichi manage to bump into Yoshino almost right away. Their plan is to send an incredibly weak curse after him to see how he reacts, which would dictate their next move by ascertaining if the kid has an awareness of curses or not and if he may have had some involvement with the murders that took place in the theatre.

Meanwhile, Kento has been butchering Mahito’s menagerie of monsters in the sewers, calling out his quarry to come out and face him.

After coming face to face with the scarred up guy, Kento makes a comparison between his opponent and Gojo, given their strangely carefree attitudes and the sinister strength which lurks beneath. As shown almost immediately after when the Mahito gets his hand all but sliced off, and he just waggles it about like some broken toy.

Mahito’s power is to alter the very soul of a human by touching them, he claims that the body is merely a shell that forms around the soul to protect it. Thus he can easily alter that shell to match his whims. And announces he keeps a stockpile of shrunken humans on his person at all times. Pretty gruesome. Although Kento brushes it off by announcing it’s half an hour before his shift’s over and he’s adamant he’s going to finish work on that time. Man, I like this guy. It’s going to suck when he dies. 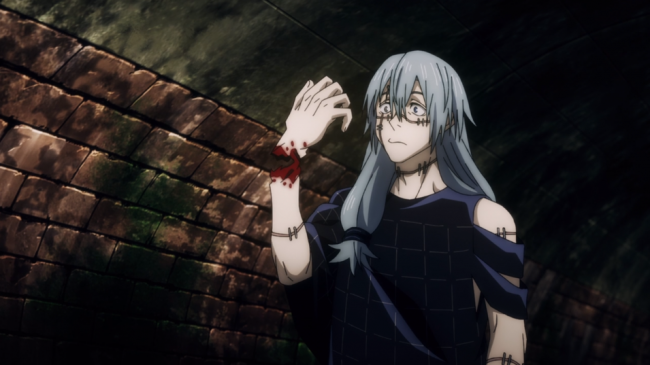 Back in the streets, Itadori’s plan can go into action; Yoshino is confronted by the same fat teacher who observed him being bullied in the previous episode and did nothing about it. He then goes on to gently reprimand the kid for skipping school and not even going to the dead kid’s funerals. How much time has passed since then exactly? I’m not entirely sure if this guy is actually picking on this kid or if he’s just so staggeringly oblivious to the horrendous bullying that’s going on around him.

Either way, Yoshino seem like he’s about to use some newfound power on the man. That is until Itadoi blunders in at last minute with his miniature curse friend in tow. This kid sure knows how to diffuse a situation, because whatever was going to happen is cut short when Itadori pantses the teacher and then does a runner with his kegs. Doing an entire lap of the block and coming back to the kid on the other side like nothing has happened.

Now, this kid is damaged. He’s had some pretty crappy things happen to him his recent high school life, being bullied both physically and mentally. Lucky for him Itadori is that perfect blend of good-natured and overly empathetic shonen protagonist that might actually be able to break through to this kid and for it to work for me. Getting people with this amount of damage back on the straight and narrow always seems like too easy of a fix for a lot of anime I watch.

But there’s something so genuine and accepting about Itadori’s whole persona that I can totally buy someone like Yoshino being taken entirely out of his self imposed cloud of gloom by him.

Returning to the fight, Kento is holding his own against Mahito’s monstrous transformations, dodging the Akira-esque tentacles that are slamming into the sewer walls. Then he notices one has a face, and it pleads for his help. It’s messed up. Mahito brushes it off, referring to it as their “soul’s sweating”. Something about Kento wiping away the tears of the unrecognisable human face really got me.

Like Yoshino, I struggled to connect these warped monsters with real people. But this scene and Kento’s reaction to it, lying about it not bothering him while he makes a simple gesture of try and comfort the former human, it hit me stronger than I has expected this anime to manage. The fight goes on and Mahito manages to get his hands on Kento, although his unconscious control of curse energy manages to protect him from getting transformed on that occasion. Although it won’t protect him forever.

I really like Kento, this episode has just compounded that fact for me. The standoffish facade hiding a good heart is a character archetype I love and this guy fits that mould to a tee. My only real concern is that he feels like a character written for the pure purpose of becoming very quickly liked, and then getting killed off the by the major villain of the arc. I hope I’m wrong and he does survive this fight somehow, although I can’t imagine he’s going to win at all.

This show is really getting into a groove for me now. While I was enjoying meeting the wider cast that was getting introduced in the previous handful of episodes, it’s nice to get a more contained storyline just focusing on Itadori and one other supporting character. I feel like it’s been a while since we got to really spend some time with Itadori as this hyper empathetic goofball.

He reminds of me of Tanjrio from Demon Slayer honestly, except way more of a dope. He feels for everyone and anyone, almost to a fault. It makes me wonder if he’s going to drag Yoshino out of the darkness and into the light. Honestly, it only just occurred to me when watching this episode again to gather images that the kid at the end of the anime’s opening with Itadori is probably Yoshino. So maybe I’m answering my own question there.

you're only as good as your last hair cut