I’m most assuredly not the first person to write about this. And I can already imagine there are people looking at this title and tearing their hair out at the very idea of me making this post on Halloween and not on Christmas. But that’s the whole point of this post right? To try and figure out what category this movie falls into. And I’m posting it now because my Christmas schedule is always pretty packed between work and my ‘best of year’ series. And hey, what’s wrong with doing something unconventional?

I’d like to start out by making the point that for me, movies need to do a little more than simply fall into the Horror genre to be counted as a “Halloween” movie. Unlike like what I’d deem a Christmas movie, in which really needs to focus on the holiday itself in some capacity, Halloween doesn’t necessarily need to be a factor in a good Halloween movie.

It’s why this debate has been never really been settled in some friend groups despite A Nightmare Before Christmas being close to 30 years old at this point. Huh, there I go making myself feel old again.

Halloween – Is is Scary?

While I said not all horror movies are Halloween movies, I’d say that an important part of something being a “Halloween movie” is that it at least has horror elements. Which The Nightmare before Christmas certainly does; it’s about a skeleton living in a town of monsters looking forward to the day where they can scare and frighten one another once a year.

It is a scary movie though? Well no, it’s a children’s movie. And as a guy in his early 30s, I’m well past the point of finding this scary. However, bear with me a moment. From a visual standpoint, A Nightmare Before Christmas is a visually distinct movie, the stop-motion animation and handcrafted characters are actually pretty unsettling to look at out of context.

A young child could easily be creeped out by these character designs. So yes, within context I would say it’s a scary movie. Between the visual style of the movie, the buildup and climax involving Oogie Boogie and the very content of being set in “Halloween town” then I’d say it fits into this requirement.

Christmas – Is it about Christmas?

There are certainly some non-Christmas movies that certain families would associate with Christmas time, like Harry Potter or classics like Chitty Chitty Bang Bang. Just because watching them has become something of an annual tradition. But for something to really be accepted as a “Christmas movie” in my eyes; it really has to be either set at Christmas or be about Christmas.

I’m going to take a stance here and say that Die Hard isn’t actually a Christmas movie. I love Die Hard and I would happily sit and watch it on a Christmas Eve night if someone invited me to. But for the purposes of this discussion, I’m going to say it’s an action movie that just so happens to be set at Christmas.

An actual Christmas movie has to evoke a certain feeling in the audience, inspiring the feelings the holiday is supposed to represent, and it’s difficult to do that if Christmas is not a central theme and plot point of the movie. And the holiday is undoubtedly a part of The Nightmare Before Christmas, hell it’s in the title. Not only that, most of the movie’s content deals thinking about and discussing Christmas more than it does Halloween.

Halloween – Can you laugh at it?

This might seem a little incongruous with the whole “scary” aspect of Halloween. But think about it, Halloween isn’t just about scaring people, in fact, you could argue that’s the last thing people actually do on Halloween. The whole concept of “trick or treat” is about juxtaposing the scary and the macabre with the sweetness and delight that come with sharing treats with those around us.

And by the same logic, a Halloween movie needs to provide some treat to go with its trick. Be that through being a delightfully campy horror movie of the 80s, or an intentionally comedic twist on the horror genre. While some horror movies deal with depressing themes like humanities’ self-destructive nature, a Halloween movie really just needs to be a good time, a scary movie you end up laughing at as much as you’re frightened by it. Which is why I don’t really think anything in the zombie genre can really apply in this instance.

Even comedic and statistical jabs the genre. The only exception being The Return of the Living Dead I can think of.

A Nightmare Before Christmas, again absolutely falls into this category. For one, it’s a musical and filled with character, charm and hijinks. While not necessarily “haha” funny, it’s more joyful than terrifying, which I really think makes something a good Halloween movie more than something like the Saw franchise for example.

Christmas – Is it about family?

In the most classic sense, A Christmas movie needs to have an underlying theme of goodwill to your fellow man. So while it might not necessarily need to be about the classic nuclear family, it needs to be a movie about people coming together and treating each other well, learning the value of their friends and their family. Which is what Christmas is about at the end of the day. Kevin’s lesson at the end of Home Alone is to value his family, Scrooge’s lesson at the end of A Christmas Carol is to value those around him because once he’s gone, what will be left of him.

You get what I’m driving at here right?

This is the one aspect of A Nightmare Before Christmas that I’m not sure applies. Jack’s journey is one of getting bored with Halloween and wishing for something different and becoming enamoured by Christmas while ultimately unable to comprehend the feelings the holiday makes him feel. Ultimately, his reinvigoration for Halloween feels a little unearned to me and I never really feel like he actually got Christmas in the end.

The closest thing we do get is him realising his feelings for Sally. If I had to change anything in this movie to make it better fit this, it’d be during the “poor jack” song, where rather than coming to the conclusion of “screw them, Halloween is much better anyway”, he realises that he was loved in Halloween Town by everyone and didn’t need to look for something different in the first place.

Like it’s a wonderful life, where his arc is realising what he had all along.

Halloween – does it have an iconic monster?

All the best Halloween movies have some iconic totem for people to gather around. And Horror is a genre with no shortage of easily recognisable monsters and villains. Characters to rally around and celebrate, despite the fact that most of the time they’re the bad guys in the movies. Because that’s what we do at Halloween; we dress up as Jason Voorhees, as Jigsaw or sometimes as a Ghostbuster.

We celebrate these symbols and icons and movie are the biggest source of inspiration in this. And no great Halloween movie is without some monster on the poster to let you know what you’re watching at a glance. You could argue that The Nightmare Before Christmas has no shortage of monsters within it.

While Oogie Boogie is the villain of the movie’s climax, for the most part, Jack himself is the bad guy. Misguided as he may be. It’s why the movie has withstood the test of time for so many years and we’ve seen more couples than we can even imagine dressing up as Jack and Sally at Halloween parties. The movie is packed with iconic monsters when nearly every member of the cast is one.

Christmas – Is it nostalgic?

By far, the biggest reason we go back to Christmas movies over and over again is to feel that same sense of festive nostalgia we felt when we were little kids, excitingly looking up at the Christmas tree and anticipating all the presents we’d be getting on Christmas morning. To those of us who grew up celebrating the holiday, there’s something very warm and comforting about reliving that feeling through the same movies we watched back then. And if not those movies, then ones that evoke that same tone and feeling.

Why do you think we still go back and watch movies from the 1940s and 50s each and every year around the holiday?

And at this point, it’s kind of difficult to deny that The Nightmare Before Christmas doesn’t fall into the category of nostalgia. Like I said at the top, the movie is nearly 30 years old and people still come back to it over and over again. There’s a pocket of fans that continue to have a weirdly obsessive view of this movie to this very day.

Upon watching it again today, I’ll admit that the movie doesn’t actually evoke that same warm and fuzzy feeling of family, friends and togetherness that most of my other Christmas favourites do, but there’s no denying that it’s still being talked about every Halloween and every Christmas as a classic.

Verdict – What side to I fall on?

It might seem like I loaded these questions in a way that The Nightmare Before Christmas could fall into both categories, but I really didn’t. It just goes to show that the movie really is walking a fine line between the two and could easily fall into either category. At the end of the day, I could cop out and say that the movie hits differently for each and every person who watches it. Which is undoubtedly true.

But after talking about the movie in regard to each of these categories, I ended up feeling more strongly towards one side than the other. 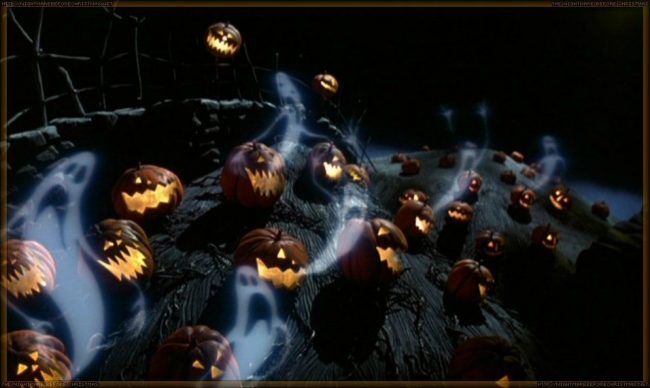 Now here’s the thing. If you go on purely what I’ve written in the six categories above, it would appear that The Nightmare Before Christmas doesn’t fit into the Christmas category quite as neatly as it does the Halloween one. It certainly didn’t invoke that warm, familiar feeling in me movies like Muppet’s Christmas Carol and Home Alone does.

But I still actually think that A Nightmare before Christmas is way more of a Christmas movie than it is a Halloween movie. Which makes the fact that I’m posting this on Halloween itself seem all the more ridiculous. Halloween is only really the setting of the movie, starting off on Halloween night and staring a bunch of monsters that have an Adam’s family level of associating the macabre with wholesomeness.

But after this, the vast majority of the movie deals with the themes of Christmas, Jack realising the holiday inspires something in him and trying to understand that, while ultimately almost destroying it in the process. My biggest source of hesitation is that it kinds of fails to stick the landing in terms of him learning a lesson at the end. Which is usually big message at the end of most Christmas movies; where you see the family united together and happy.

Which is why I guess you could still easily watch it during either holiday. Because it doesn’t slot nicely into either. Honestly, this debate only really exists because the holidays of both Halloween and Christmas are so core to the events of the movie itself.

In the end, I tentatively fall on the side of Nightmare before Christmas being a Christmas movie. And you’re totally free to disagree with me. Happy Halloween everyone and I hope you all have a safe and spooky night on this very unusual October 31st.