We’re at the early stages of this series still; where it has me on the hook, but I’m still trying to feel out whether it’s got the strength to reel me in or not. At this point, I’m certainly on board for the show’s stellar fight animation and the ever loveable charm of a good-hearted doofus protag. But for it to keep my attention it needs to really make me care.

That wasn’t some ominous prelude to my thoughts on this particular episode or anything, I’m just already seeing a lot of potential for this show to really become one of my favourites, but at this stage, we’re still really getting to know this world. So a lot of my thoughts and comments on these early episodes are mostly restricted to the show’s potential.

And in that regard, I am pleased to see that we’re seeing Itadori getting knocked down a few pegs this early on, despite the fact that he’s already been shown to be something more by normal person standards. After his mental break at the end of the previous episode, it seems like the curse spirit Sukuna has complete control now of Itadori’s body now and has shown just how powerful he is.

While having the series’ protagonist playing host to a very dangerous monster is nothing new in terms of shonen battle anime, the fact that Sukuna is such a large threat and one that is already threatening the supporting cast adds a welcome bit of spice to events. Mere moments after defeating the Special Grade, Sukuna is outside and confronting Fushiguro. Teasing and tormenting him for no reason more than he enjoys it.

The inevitable thought lingering at the back of everyone’s mind watching this, I’m sure, is that at some point Itagori would retake his body. Right when it would be the most narratively dramatic to do so. Much to my surprise, the series thinks of that and chucks a curveball my way though by having Sukuna do something to stop him. Something like tearing out his own heart.

I always seem to forget that this is quite a bloody show. While Sukuna can survive without a heart just fine, if Itadori were to retake his own body then he would certainly die. What with his heart lay oin some nearby undergrowth. It’s difficult seeing Fushiguro somehow managing to hold off Sukuna at all, let alone manage to save Itagori’s life in the process. But he gives it a go anyway, giving us another of the series’ fantastic action sequences.

On in which we see Fushiguro being thrown through the air and skipping along rooftops like a smooth stone across a body of water. During which time we get a little insight into Fushiguro and his motivations. I’ll admit, even I started using comparative shorthand when thinking about this guy, equating him to some emotionally stunted edgelord as his look would imply. But while Fushiguro might be a little stoic and standoffish, his inner monologue tells us otherwise.

Despite only knowing Itagori for a short time, he knows his new friend would gladly sacrifice himself to stop Sukuna going on a rampage and hurting anyone else. Thus his main motivation for fighting the demon is to save his friend before he has the opportunity to make that sacrifice. A goal he ultimately fails in achieving.

From what I could gather regarding Fushiguro’s perspective on life is that he essentially thinks that karma is a cruel bitch mistress. Punishing the good while allowing evil to prosper. Thus he wants to become the giver of good karma, to even out these grand scales that seem so unfairly tipped out of balance. “The only thing granted equally to all is an unfair reality”. 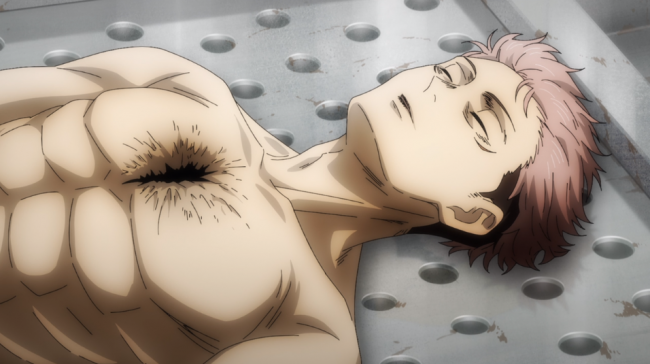 I know I said he wasn’t an edgelord, but he’s certainly edgelord adjacent.

In the end though, Fushiguro is helpless to do anything to Sukuna at all and Itadori takes back control, dying with a smile on his face. Giving his final works of respect to the man who was both his savour and the man who put him on the path to this fate.

I genuinely found myself wondering for a moment as to whether the show really was killing Itadori off, and the focus would shift to the newly introduced supporting cast. But then I remembered that Itadori is all over the opening credits for the series, and his fate is almost certainly not what it seems.

The rest of the episode is split to focus on three different sets of characters, giving some context to what just happened and also setting up the future events of the series. We see Gojo lamenting the death of his student and threatening to tear down the leadership over him in his frustrations upon realising the whole event was orchestrated by them to ensure Itradori would die.

We meet a mysterious figure surrounded by demons, just taking a leisurely stroll downtown and into a café. Where they cheerfully discuss the downfall of the Jujutsu school of sorcerers, in which Gojo and Itradori seem to be already the biggest pieces that need to be used. It’s all cloak and dagger type stuff, but pretty meaningless right now with the context that will eventually make it meaningful.

More importantly, Fushiguro and Kugisaki are broken out of their tough-guy style of mourning for their classmate to take place in a tournament arc. Only five episodes and we’re already doing the interschool fighting tournament eh? I’ll give it to you Jujutsu Kaisen; you’re getting this stuff done early. The two first years are invited by three of their upperclassmen after the reveal that the entire third-year class is currently unable to participate due to all being suspended.

And so we’re introduced to our first group of goofy side characters in Zenin; the cursed tool expert, Inumaki; the cursed speech user who can hilariously only speak in ingredients for rice balls and Panda; who is a Panda. Of course no further explanation is needed, that would ruin the surprise of why there’s a God Damned talking panda wearing an “I love Pandas” armband attending their school.

Thinking back to other prominent shonen of this style, it’s these side characters who usually end up making or breaking my enjoyment of a show. Of course, there are some exceptions, but for the most part, I feel like these kinds of side characters can really do a lot of the heavy lifting in terms of my investment and enjoyment of the series. Especially when the characters you don’t expect to be total badasses swoop in and save the day.

I once again find myself thinking of a Naruto comparison, which is probably the sixth time that’s happened in my brain while writing this.

Also Itadori isn’t quite dead yet. That’s how the episode ends, with him having some kind of inner body confrontation with the Double-Faced Spectre who holds his life hostage.

We’re starting to shape our characters now, and the scope of the world it takes place in continues to grow. I’m still be super interested to see where all of this goes even if the series didn’t have amazing, end of series calibre fight sequences every other episode already. I look forward to seeing how long Itadori is going to remain out of the story, how this tournament arc will flesh out and if these high school students are ever actually going to attend a class at any point while they’re at this school.