Finally, I get to be a part of the bandwagon for this one. I didn’t get to see the first season when it was brand new because of Sky Television’s stronghold over the Star Wars Licence until the March following everyone else getting to see the Mandalorian. Now I’m right here for the second series as it comes out, and I’m very excited to talk about it. Despite the movies being on hold, I’m very excited to be a Star Wars fan right now.

This first episode begins by mostly just picking things up where they left off from at the conclusion of the first season. The Child has been described as being part of The Mandalorian’s clan, whose name has been revealed to be Din Djarin at the end of the previous season. Although most characters continue to just call him Mando. The Armorer advises him to search out the Child’s own kind to return it to them.

Although at this point, the distinction between the race the Child belongs to and the ancient cult of sorcerers called Jedi is a little blurry for Din and the Armorer both.

We begin this episode with Din trying to reconnect to his own people, who seems to be just about as endangered as the Jedi at this point. Quickly he finds himself in pretty hot water, being double-crossed by a John Leguizamo voiced alien at ringside of an underground Gamorrean fighting ring. Although he easily deals with the attack and is directed towards Tatooine.

Din’s search for other Mandalorians goes off the rails almost right away, upon arriving on the world and coming to the dead-end mining settlement in the middle of nowhere, he encounters the town’s marshal. A man wearing a familiar set of Mandalorian armour. Arriving into this town gives me powerful western vibes, reminding me of this series’ roots and inspirations right from the start.

The lone gunslinger riding into a dusty, one road town is about as iconic a trope of the western genre as I can think of. There was a lot of debate as to whether this series better fit into the western genre or the samurai genre when the first season came out, I honestly think it’s a combination of both.

The man introduces himself as Cobb Vanth, and he is wearing the same armour once worn by the notorious bounty hunter Boba Fett. Although nobody in the show knows that, instead Din is upset that a non-Mandalorian is sat in front of him wearing the armour of his brethren, which is a sin in their culture. He demands the armour be returned to him and tensions begin to rise. Before any blasters begin to fire, the pair are stopped in their tracks by a ground quake.

It’s at this point that I’m reminded of the impressive budget of this series. The source of the shaking is revealed to be a Krayt Dragon. A much talked about creature in the Star Wars lore, but one rarely seen. In fact, this is the first time I’ve seen a live one in any kind of Star Wars media, and it looks really cool. Din and Cobb come to an understanding: if the Mando helps the town kill the dragon, he’ll give up the armour without any trouble.

A plan is hatched, and because of the dragon’s massive size both the people of the town and their previous tormentors: a local tribe of Tuskan Raiders are forced to team up to kill the dragon, laying a giant trap using explosives. Again, it’s a very western inspired story, one in the style of stories already told even in the first season’s fourth episode: Sanctuary. Rallying people together to take down the common threat. Not that it bothers me. 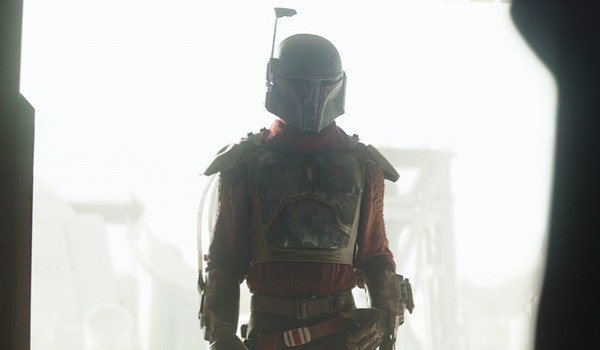 Cobb’s a cool character, played by. Timothy Olyphant. We get his backstory, how his town was taken over by slavers and he managed to escape while stealing a container of crystals from them. Almost dead in the Dune Sea, he is rescued by a group of Jawas in their passing Sandcrawler. Using the Crystals to barter, he spots a set of Mandalorian armour and buys it, then using it to drive the slavers away and become the town’s Marshal.

Everything about him is this cool throwback, with him obviously wearing Boba Fett’s armour, and his speeder being a repurposed Podracer engine. With the uneasy alliance formed, the trap is set. And after an impressive action sequence and a bit of luck, the dragon is killed. True to his word, Cobb gives the armour to Din and the Mando leaves, being back to square one in his search for fellow Mandalorians.

As Din rides back to his ship, a lone figure watches him from a cliff. Looming over him in shadow, for some weird reason, my initial thoughts went to Darth Krayt. I don’t know why, I didn’t read any of those comics that featured him. But no, the commonly held train of thought is that this mysterious figure is, in fact, the man himself: Boba Fett.

The actor playing this man is Temuera Morrison, who played both Jango Fett and the clone troopers in both Star Wars movies: Attack of the Clones and Revenge of the Sith. So, while this could be any surviving clone from the Clone Wars, the odds of it being Boba Fett are much higher.

Fett surviving the Sarlacc pit is simply common knowledge for fans of the old Legends continuity. As he’d go on to have many more adventures, reunite the Mandalorians and become their begrudging new Mandalore in the process. However, in the new canon, his status was always left enticingly ambiguous. It looks like this series of the Mandalorian is finally giving us a definitive answer on his survival.

It also gives us a possible explanation as to how he did survive. A passing line from within this episode states that the Krayt Dragon was living in an abandoned Sarlacc pit, because the dragon ate the Sarlacc to steal it’s home. While I’m not saying this dragon ate the same Sarlacc that played host to Jabba’s pleasure barge in Return of the Jedi, but the idea of the Sarlacc being lower than something else on the food chain means we do have an explanation for how Fett might have survived. 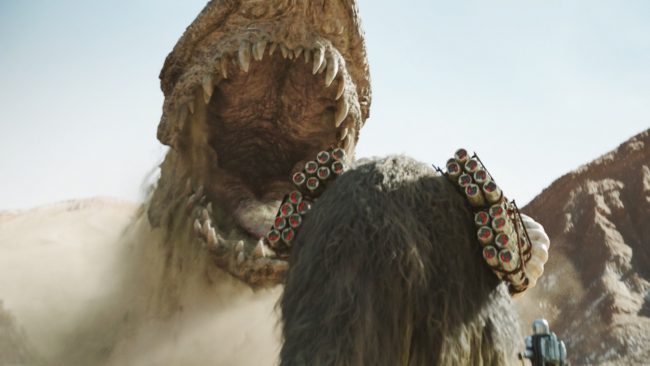 Seeing as this series taking place roughly five years after the events of Return of the Jedi, the is plenty of time for this to be a possibility.

The most interesting outcome of this reveal being that it puts Boba Fett and Din Djarin directly at odds with one another. Let me explain, as the episode states, Mandalorian armour must be in the hands of a Mandalorian and nobody else by the word of their code. Which is where the armour is right at this moment. Boba Fett, as far as I’m aware, is no Mandalorian.

Based on a line from the Clone Wars, there’s even some debate as to whether Jango was a true Mandalorian, or if he simply took the armour from one. Although I feel like the Star Wars writers have quietly retconned that version of Mandalore in the time since. But Jango’s status notwithstanding, Boba only lived with his father for so long. After that he was mostly raised by bounty hunters. Ones such as Aurra Sing.

During which time, I doubt Fett met or interacted with many other Mandalorians. Although he was shown to be very hung up over his father’s death and would most likely want it back for sentimental reasons. Putting Din directly in his sights. Of course, the series might go a totally different direction with his character, but that’s what I’m thinking right at this moment.

This was a great first episode to the series. Full of action, style and impressive CGI. I’m glad the Mandalorian is back and look forward to continuing to talk about the series as it goes for the next few months.

2 thoughts on “The Mandalorian Season 2 Review – Episode 1: The Marshal”