I touched upon this when I spoke about GT’s erratic structure yesterday. And not to tip my hand or anything, but the writing in Dragon Ball GT is simply terrible. I guess that’s really just showing the whole hand, but at this point; it’s hardly a hot take on this old series.

Within the first 16 episodes, I had no problem with the show’s writing. It was a light and fluffy affair, focusing on smaller, two part stories as the characters took their grand tour and collected Dragon Balls. As the story takes a more dramatic turn and a major villain becomes the new threat, GT”s writers seem to lose themselves and forget some pretty basic tenants of how to construct a story.

Yesterday, I said that the point at which this really started to become a problem for me was the point where Giru’s betrayal was revealed to be a long con, orchestrated by Trunks to uncover and dismantle Dr. Myuu’s operations. Like I already said, in itself, this twist isn’t bad, but something about it just seems off to me.

It comes from a line where Goku says something just “doesn’t ring true” about Trunks getting captured by Myuu so easily. Bitch Please! Trunks has been semi competent throughout this series at best, so for him to suddenly turn into this tactical genius with this big “Keikaku” moment is the thing that feels like it doesn’t ring true. 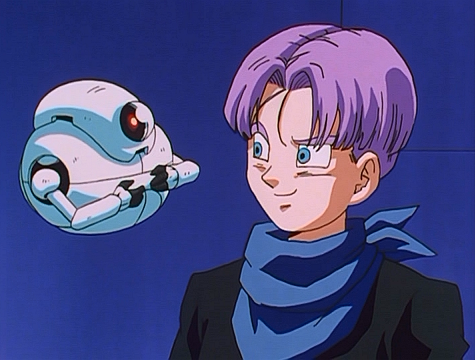 It’s not that that Trunks’s master plan being difficult to accept really bothers me though, it’s that there was zero hint on screen that Giru was a double agent leading up to this reveal. Giru’s actions never lead me to believe he was conflicted or feeling guilt for pulling the wool over Pan’s eyes. Sure, he’s a robot, but he’s been shown to be a very emotional Toriyama style robot. so I can’t accept that as an excuse.

And maybe, let’s say that this was all in aid of making the reveal all the more dramatic when he turns good again. I could accept that, if not for the fact that throughout the remainder of the arc, the story approaches major revelations and exposition in the exact same way, which ultimately becomes my biggest issue with this series:

Undercutting its own drama

The episodes following the release of Baby are littered with examples of throwing exposition at the audience, only at the moment it becomes relevant. There’s never any buildup to it, the information is never treated as some big mystery waiting to be revealed, it’s almost as though the information doesn’t exist until it leaves the character’s mouths. Which means that none of these revelations carry any weight, because of the matter-of-fact way in which they’re delivered.

I’ll give a few examples; When Baby confronts Vegeta for the first time, he makes a remark about his father, to which Vegeta’s response is to smile and say “So you’re a Tuffle”. A concept never mentioned before this point. We then get Baby revealing his origin as the last survivor of an alien race destroyed by the Saiyans, to which Vegeta seems unimpressed.

This is the reveal of the major villain’s origin. Never mind the fact that none of this information was teased upon before this moment, but Vegeta’s own under-reaction to the information mirrors that of the audience. He doesn’t care: why the hell should we.

It’s something GT does over and over; utterly unable to build to a moment and then give it a satisfying payoff at all. The entire buildup and reveal of the Super Saiyan 4 transformation is fumbled to such a degree that I’m almost impressed by it.

Had this been a better written show, the existence of Super Saiyan 4 would have been built up to, given some hype and gravitas. But Old Kai goes and name drops it before Goku even starts fighting Baby again once his tail has grown back. So you go through the entire drama of berserk, golden great ape Goku knowing that something more is coming. It’s like the series actively wanted to avoid building any real tension or surprise for what was the tent pole transformation of its series.

Look at the build to original Super Saiyan in Dragon Ball Z, or Ultra Instinct in Dragon Ball Super. As many problems as the latter series had, the reveal of Ultra Instinct was one of the most impressive moments in all of Dragon Ball. Because it was teased out slowly, foreshadowed and given due attention and weight when it eventually happens. Something GT fails to deliver in every area.

It’s no secret that shows like Dragon Ball are produced by a number of teams in different locations, and that means there can be some inconsistencies between episodes when it comes to quality of animation and tone of each individual episode. But in GT, there are back to back episodes that feel like they came from entirely different scripts, let along different studios. I don’t know what happened, but at times it felt like I had skipped entire episodes of fights, the tone and sway of a fight had changed so much.

This was always especially jarring during fights, between Goku and Rildo, between Gohan and Goten and then several times in the final battle between Goku and Baby. During these battles, an episode with Goku on the ropes, seemingly struggling against a tough opponent. Finally feeling like he’d met someone who could push him a little. “Finally”, I’d think. Goku’s getting serious.

Then the next episode would be begin with Goku was laughing, joking around and failing to take his opponent seriously at all. Hell, sometimes the battle damage to his clothes would be completely undone. Then he’d generally go on to beat the opponent in some anticlimactic fashion as though the whole thing was a walk in the park. 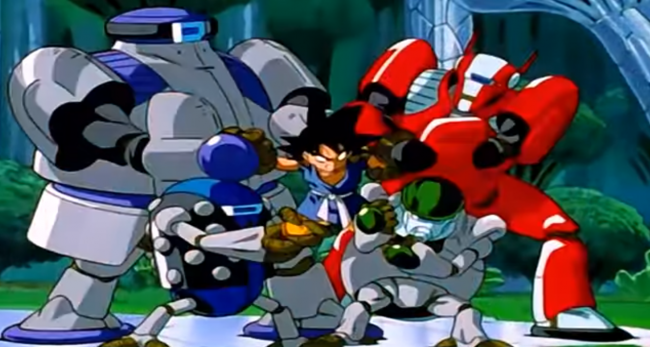 Creating false drama to end an episode on a cliff hanger is one thing, but this exact thing more than once. Which made me feel like I was skipping episodes in which Goku would find some way of wearing down his opponent, or even mention that he’d been holding back. But nope, it was a complete tonal change that seemingly ignored the final moments of the previous episode.

Let me give a specific, and the most annoying example for me personally: Episode 20 featured a battle between Goku and General Rildo in which Rildo reveals that he is one with the metal planet, he can manipulate the planet itself as an extension of his own body. The result is a really great action sequence in which Goku is being attacked by the warping environment, unable to even damage his opponent. The episode ends on some real drama as Rildo seems like a genuinely threatening opponent with a very unique power set. I was actively excited to see how Goku would overcome this enemy.

Episode 21 begins, Goku and Rildo are just fighting hand to hand, like any other Dragon Ball battle. Not only that, Goku seems to be winning, goofing off and cracking jokes. His ability to warp the planet itself seemingly forgotten. The fight then ends very anticlimactically, with Goku getting turned to carbonite because Pan showed up to distract him.

Rildo does show the ability to warp the planet once again later, but by this point Baby has been released and the characters just dispatch him with minimal effort as they escape the planet. Completely undercutting all the gravitas and weight that had been building surrounding the power of this enemy.

That’s just one example of the frustratingly inconsistent writing that goes along with the show’s utter inability to build up to an effective payoff. Every major villain is finished off in such a curt and simple manner that every major conflict ends with a whimper rather than a bang.

A failure to follow through on pretty much anything

I haven’t even gotten into the legion of minor inconsistencies that pepper the series throughout: Character’s forgetting they have the ability to fly, lack luster voice acting, awful music in the dub, the utter mishandling of the “retirement” of Majin Buu and Piccolo during the arc (although I might get into that more later in the week), not even mentioning the reveal of sacred water and the fact that giving it to either Bulma or Vegeta himself would end the fight with Baby there and then.

Plot holes in themselves don’t ruin a story, but there is far worse going on in this series on GT than simple gaps in logic. And so many of them that it’s difficult not to get annoyed with it.

Going into GT, I really did want to give it the benefit of the doubt. But everything I’ve spoken about here really does sum up my biggest problems that I have with the series. Had the reveal of Baby, his origin and then the buildup to Super Saiyan 4 been executed even slightly better, I would have enjoyed this series so much more. But in all honesty, I feel like I could have written a better version of this story than the episode to episode style of writing that carried me through these 24 episodes.

This is a part of a week long series in which I complain about Dragon Ball GT, if you want to read the other parts, the links are below:

Day 2: The Problem With Pan

Day 5: Conclusions of the Saga