I wrote a piece about the Shie Hassaikai Arc of My Hero Academia not too long ago, mostly lamenting the more serious tone of the arc and it’s lack of the fun that made me fall in love with the show in the first place. Well, right away this new opening for the next part of the series kind of seems like its specifically going out of its way contradict everything that I said in that last post.

Not that I’m complaining.

There’s a lot going on in this episode, and maybe one of the things about it that really grabbed my attention so more than the show has done for the past number of weeks is getting back to the school aspects of the series and seeing the rest of the class again. It’s just fun to see all the kids acting like kids again. Specifically, I’ll be honest and say I’m a big Iida fan, and seeing that flailing hand boy in any episode will raise it up in my estimation. 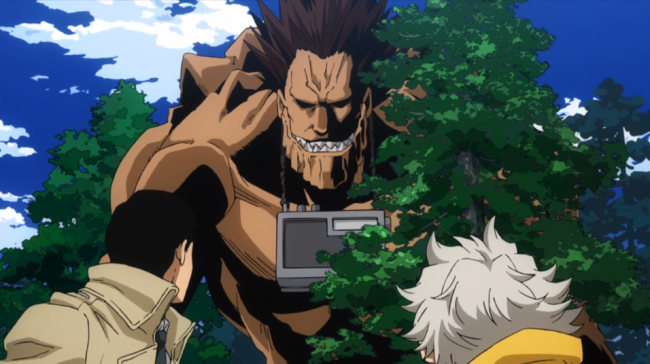 We also revisit Mirio in the hospital, who despite having lost his quirk, is as bright and energised as we’ve ever seen him. The more I see of Mirio, the more I do admire him as a character and a hero. Despite the massive blow he’s suffered having worked on his quirk more than anyone, he has never faltered and never lost hope, not in his defence of Eri and not in his desire to continue being a hero.

Midoriya must feel the same way, because upon seeing him and his staggering resolve, he seriously starts to consider passing One of All to him there and then. But Mirio turns this “hypothetical” offer down, in part because he believes Eri will return his quirk to him one day, and also because he believes that Midoriya is selling himself short as a Hero. But like Tamaki (Suneater), he sees that Deku just lacks self assurance, despite him doing what nobody else could do and take down Overhaul. With or without help. He just needs to see that.

There’s a lot of self reflection going on in this episode actually. Midoroya’s angst is expected, given his personality, and just what happened during their rescue of Eri. But we also get to see the other characters reflecting on the events of the raid, all processing the event and certainly changed by it.

I was actually really happy to see Uraraka get a moment of character development that wasn’t centred on her crush on Midoriya. Throughout season 3, it felt like that’s all she had going for her character and very little growth for in her terms of being a hero. She even had a first row seat to Nighteye’s injuries. Being a hero is no light business.

As the four lie in bed and digest the realities of being a professional hero, we get a flashback to the events of the previous arc. One that recontextualizes it, accompanied by a piece of music that makes it all seem a little more hopeful and a little less grim that is felt like at the time. It makes the whole thing seem a little more positive after the fact, almost like they read my blog and wanted to spit in the face of my opinion.

Which I’m fine with.

The second half of this episode seems to be focusing on the next segment of story, focusing on Bakugo and Todoroki as they take part in the supplementary classes that will allow them to retake their provisional licence exam. Along with them we are reunited with Yoarashi, the whirlwind guy who failed along with Todoroki because the pair were more concerned with competing.

Along with the real Cammie, who seems just as loopy as when Toga was impersonating her during the provisional hero licence exam. so we’ll be following these guys for at least the next episode, and based on the preview, my complaints about the series getting all heavy is not going to be an issue there.

Unless there’s a subplot about everyone going after the giant monster follower of All for One living in the forest and getting destroyed by him. Or this sudden meeting between All Might and Endeavour taking a turn. Which is something I was never aware I was excited to see until now.

While I wouldn’t say I was “down” on My Hero after the conclusion of the previous arc, I was just left a little lost by the tone of it all and how it ended. I get the major impression we’re in for a major piece of light and fluffy nonsense for the next few episodes at the very least, and I am bouncing in my seat to get it in my eyeballs.

One thought on “My Hero Academia – Episode 78: Smouldering Flames”