Shall I just ruin the surprise right away? My enthusiasm for this anime can’t stop me from just saying it at the top: Somali and the Forest Spirit is my favourite show of this winter season I’ve seen so far. I knew I was going to love this show right from the first episode and I’m kind of surprised I haven’t seen much buzz about it.

While Somali and the Forest Spirit isn’t necessarily a “complete package” kind of show, it’s packed with a ton of individual elements that I really enjoy, all working well to make a relatively leisurely paced, heartwarming story about a little girl on a journey with her father. Who just so happens to be an emotionless, magically powered automation. 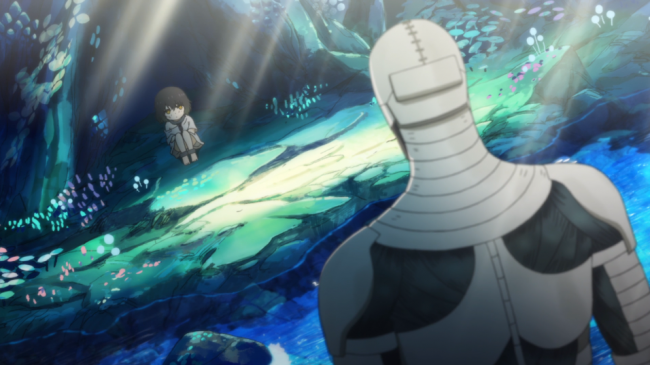 From the first episode, we’re dropped right into the middle of the pair’s adventure, with a brief prologue really telling you all you need to know regarding the pair’s backstory. Somali is a young human girl who was seemingly sold into slavery, and somehow escaped finding herself in a forest.

The very same forest being watched over by the Golem, who I very excitedly recognised as sounding exactly like Jotaro Kujo. Give me a break, it’s the first time I’ve recognised a Japanese voice actor in something. From there it skips right into their journey, as the Golem searches the world for Somali’s parents.

The world this story it set in is an odd one, it reminds me of some kind of anti-Undertale. It is almost entirely inhabited by monsters, and humans are a very scarce prey species it seems. Based on the story about the war that broke out in the past, it seems like humans kind of suck and this monster driven society is wholly peaceful. Thus Somali spends all her time masquerading as a minotaur child.

The majority of the first three episodes really focuses on the two main characters and their relationship. Somali is this adorable little bundle of whimsical energy, and the Golem is this totally emotionless, logical being of pure science fiction. Even if I hadn’t been watching a lot of Star Trek lately, the parallels to the Vulcans are right there. His constant come backs calling Somali’s behaviour “erroneous” and constantly analysing her behaviours as a machine would. Something Somali herself seems to enjoy.

The back and forth between Somali and the Golem are some of my favourite things in the show. Somali is a handful to say the least, running off and getting herself into trouble constantly, and yet the Golem is this endlessly patient, endlessly attentive force of protection for her. Like a Terminator for parenting. Their talks are usually some combination of funny and sweet:

Somali: “I wanna stay up”

I think it is this science fiction aspect of the character that attracts me to what is otherwise a very fantasy driven show. Each episode shows the characters in a different fantastical location passing through, allowing us to view this world with wonder through Somali’s childlike eyes. And while this pair travelling through this land would be nice enough, there is some extra layer to it all. 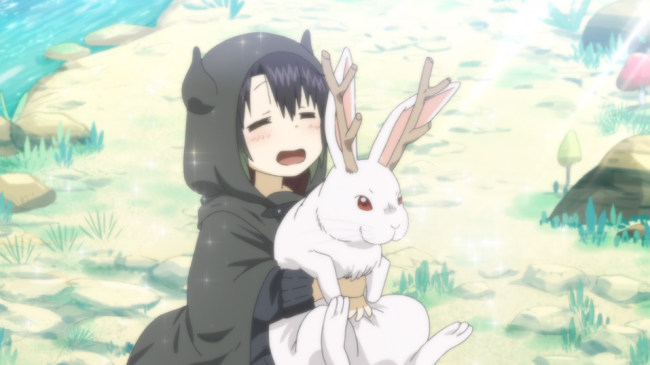 Each episode, despite how light and fluffy it’s been on the surface has carried this twinge of sadness and bitter sweetness to it. While Somali undoubtedly loves the Golem, even viewing him as her father outright, she does have some regret that he lacks the emotion to show her love and affection rather than pure protection.

On the opposite end though, while the Golem constantly claims to lack emotion, he seem interested enough in Somali’s well being that he is willing to observe and imitate families he views around them in order to make her happy. As the episodes go on though, this tragic bent to the pair’s relationship goes on.

We learn that the Golem only has about a year and half before he expires, thus he must find Somali’s parents before then, or else he will leave her alone again like when he first found her. Yet he does not tell Somali this to spare her feelings, she however takes the haste of their journey the wrong way and thinks her father wants to finish their journey so that he can abandon her like she was abandoned before. 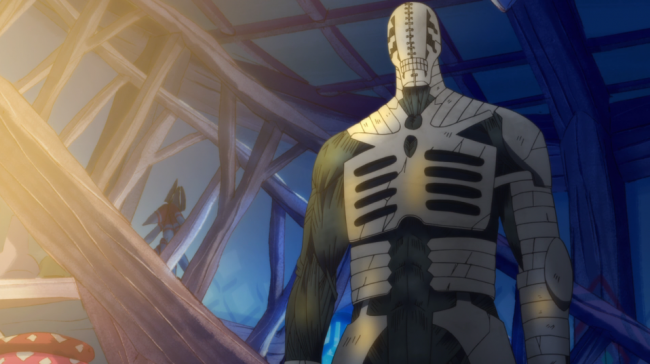 It’s tragically bittersweet and swings back and forth between this tone and them being adorable again.

I knew I’d be sticking with this show by the time I was half way through the first episode. So far, it’s been a leisurely paced little adventure with pretty low stakes in terms of action, but they only seem to be going up emotionally.

The two main characters, with the polar opposite personalities, drew me in right away. I don’t know what it is about manga and anime that focus on parenthood that seem to put my heart in a vice every time when I know that in reality having kids is a nightmare.

The setting, the tone, the cuteness and the potential melodrama that may ensue are ticking all of the boxes for me with this show. I am really into it and how precious it all is. Here’s hoping it can keep it up as it goes.

One thought on “3 Episode Rule – Somali and the Forest Spirit”