In a time where the rest of the world is very excited about Pokemon Go, Nintendo went ahead and dropped a new trailer for their upcoming seventh Pokemon Generation with Sun and Moon. And it just blew my mind. I have written on more than one occasion about my hopes and expectations for upcoming Pokemon games. I have always been pretty reasonable in these articles when it came to what I reasonably thought Game Freak would actually do with the franchise. I never reached too far from Pokemon’s established formula and kept things within reason, because after Six games that shared a lot of the same beats they weren’t going to go crazy now. I thought that Game Freak were very much in the “if it ain’t broke, don’t fix it camp”, Once again I have been proven utterly wrong by this series and how they can keep surprising me. 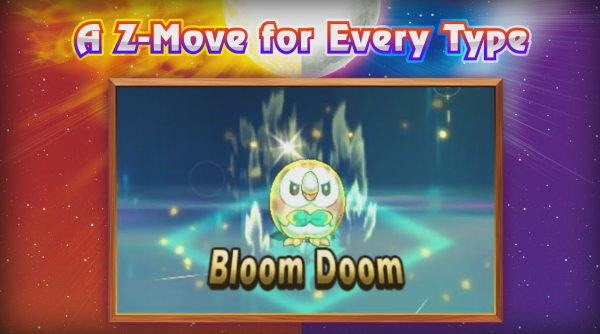 When Black and White came out, Game Freak threw me for a loop. They made a game with a much stronger emphesis on story than they’d ever done before. Then they made a direct sequel to the game within the same generation. X and Y threw another curveball at me by introducing Mega Evolution to the mix, as well as the Fairy type. Which, to be honest felt like a necessary addition to rebalance Dragon types in the meta-game. When I wrote my piece onwhat I expected from Sun and Moon, never would I have dreamt that Game Freak and Nintendo would just throw everything at the wall and see the most unlikely of ideas stick, and then just run with them.

A lot of big changes seem to be coming to the series with this game, but the biggest of them for me hit right at the start with this image:

At first I assumed they were showing some new Mega Evolutions, buy was I wrong. This here is not a Mega Exeggutor, rather it is a regional variation of the Pokemon native to the Alola Region. And it wasn’t the only one.

The trailer showed both an Ice type variation of Vulpix and Ninetales with the later having an additional Fairy typing, as well as an Ice/Steel variation of Sandshrew/Sandslash. The alternative form of Exeggutor has different typing too, being both a Grass and a Dragon type instead of its ususal pyschic typing, in addition to its hilarious new design. Now, the games have toyed with this idea before, with Shellos/Gastrodon and Manaphy/Phione in Diamond and Pearl. Pokemon that have variations based on where they came from, within the region and outside of it. 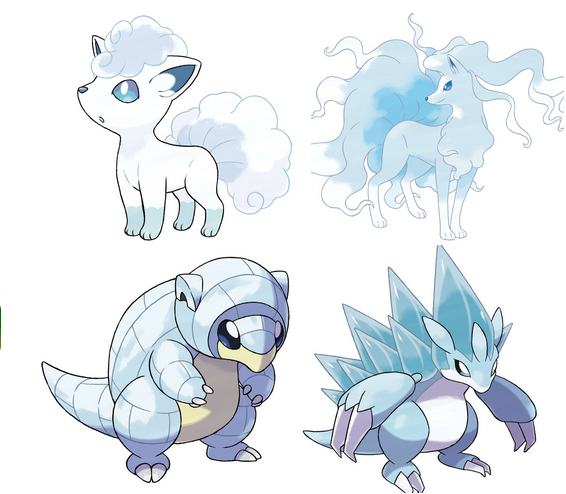 Sun and Moon are going one step further by making full on alternative versions of Pokemon we already know and giving them totally different typing, and I assume different stats and move pools. This could have an incredible impact on future games, with any existing pokemon getting a new typing and redesign. It turns the entire franchise on its head, and I am so incredibly excited about this. We could get any number of new versions of just one Pokemon. A Steel type Golem, a Fire/Rock type magma Golem, a Ice type version of Golem. Just one example and there are four potential versions of it.

This environmental variation seems to be a running theme within the game as several of the new Pokemon for the generation have different types and variations dependant on which island you caught them on. It’s possible that this might be something the series doesn’t go any further with beyond this game, but personally I’d love to see future games just redesigning all of the old Pokemon every time.

The other piece of big news which surprised the hell out of me is that they are finally doing away with the gym system of the previous games. In each game before this one, the player would collect eight badges by beating gym leaders around the map before challenging the elite four and the champion. Black and White version were the only game that deviated from this by having the final boss be the actual antagonist of the game rather than the region’s champion. It was one of the things I was sure that the series would never deviate from, after 20 years and six generations of games, I thought this was set in stone. Apparently not.

Sun and Moon are replacing the eight gyms with the “Island Challenge”, a series of trials across the region’s four islands that involve a number of tasks that culminate in a powered up “boss” Pokemon you must overcome. The trailer reveals yet another first for the games in which the number of Pokemon involved in a battle changed dynamically as it progresses, with these “Totem Pokemon” summoning more Pokemon into the battle as it is taking place. This might make battles more fluid as less than scrupulous opponents could send out more than one Pokemon against you when it looks like they’re losing. It could make battles much more dynamic than a turn based system could usually allow. All this is a multi-step process toward fighting a gym leader analogue, but at the same time the change of focus of the player’s journey is a massively welcome. 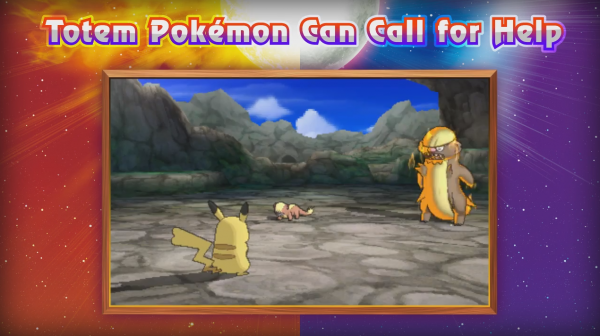 The final big addition is Z-Moves. The thing I’m the least crazy about, but anything new at this point should be embraced with open arms. It seems like the Z-Moves are the attacking variation of Mega Evolution, a super powerful attack that the trainer activates, and can only be used once per battle. Also, Bloom Doom. Need I say anymore.

I was always itching for Game Freak to just turn the Pokemon franchise on its head after so many games, but I never expected them to actually do it. I am incredibly excited for this game, not since Pokemon Gold and Silver came out have I been looking forward to one of these games to this extent. The fact that this news dropped in the midst of a Pokemon Go inspired Genwunner resurgence is kind of funny, because the reaction to this news has been incredibly mixed from what I’ve seen so far. Now I’m not saying I’m a “better” fan than anyone else out there, but when you’ve put well over 500 hours into each of the six generations of Pokemon game that have come out so far, then maybe you can complain about how your favourites are being corrupted by needless changes. Because get this, Pokemon is a 20 year old franchise with maybe 75 games using the branding out there right now, and a big overhaul like this is the most welcome thing the series has seen in years.

One thought on “Pokemon Sun & Moon just changed everything”