Price is such a big issue with video games purchases these days. I remember the days of my youth when you’d trot into a game store and just pay cash, then never interact with anything beyond what was on that cartridge again. If the game was broken, it was just a quirk of that game and people would learn to live with it. Given it was a time where games rental was a much bigger industry.

Today, prices of games sway wildly. You can find indie games on steam for a pound, Triple A releases of a few years ago go for next to nothing too in sales. But when it comes to the new big releases in a year, If you want to get the best price for the game you have to to do a little more research than just prancing to the local outlet. 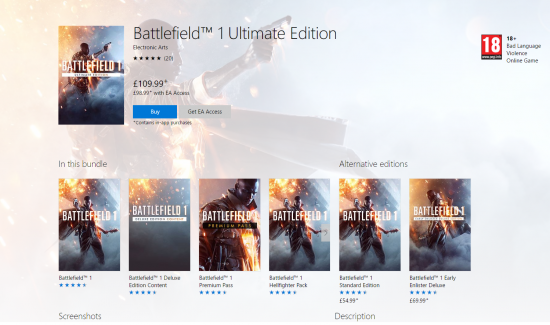 When the current console generation started, Microsoft had their big press conference revealing their Xbox One, and shit hit the fan. They seemed to be headed in a direction their fans didn’t want to follow, it was a shot to the foot that would affect them for years to come. Microsoft seemed to be shedding physical media and making online purchasing the new norm. They seemed to want to step away from second hand games and swapping games between friends altogether. While they pulled away from this eventually, the stigma stuck with them.

Personally, I liked the idea of shedding my physical media. I have two and a half TB of storage in my Xbox One, and considering that I have to install every disked game to the hard drive anyway, I might as well skip the middle man and just buy my games directly from Microsoft via the Xbox One store. It was perfect, I could buy my games without ever having to force my fat ass out of the door and would avoid troublesome social interaction with the poor dregs working in the struggling physical media store. On top of that, because I was buying mere phantoms of games rather than disks, prices would be less thanks to savings on production… right?

Sadly no. Today, if I want to buy a game, it makes much more sense for me to go out and buy a physical version of a game rather than buying through the Xbox’s internal store because the savings from doing it that way aren’t just a few coins, sometimes they’re half the value of the game itself. 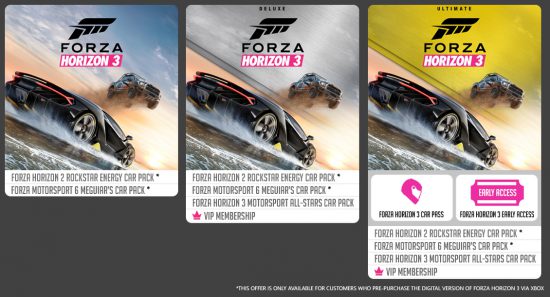 Let’s take my recent purchase of Forza Horizon 3 as an example. Currently, there are three versions on the game up for sale on the Xbox One online store. One costing £50, another costing £65 and another for £80. I bought the game for £32. By going into a store and making use of the offers and rewards that come with being a customer at that said store. I make jokes about going outside and social interaction, but for a £18 saving you can bet your ass I’m going to get a disk.

It’s baffling though, because Season Passes, pre-order DLC, VIP packs and Day One rewards are all tempting customers to buy additional content for a game that they haven’t even played yet, let alone decided if they like it enough to buy £40 worth of  additional content. That money might end up being better spend on another experience, or food… Another sinister addition to this trend is something I noticed that both this and Gears of War 4 doing. The games have been going up multiple days early for sale or pre-order, but only the “Ultimate Editions” that cost £80.

As much as I am looking forward to a game, I can’t imagine paying double price to simply play it four days earlier than everyone else. Hell, when I bought Gears of War 4, I didn’t have enough time to even play it until I had the disk in my possession for three days. And yet, people buy into it. Just today, Battlefield became available in early access, but only if you buy the £70 version or the One Hundred and Ten Pound Version. All for something you could wait two days to play for half the price and then decide if you want to pay for their season pass. (Spoiler: they’re rarely worth buying.)

So what happens if you take my advice, act like a tight-arse and wait to get the game later, maybe when it’s on sale. Then you discover you love the game, in fact it’s your favourite game you’ve played all year. Well fear not, because pretty much every game that comes out this year is riddled full of “consumables”, cosmetic packs, progression boosters (because you’re going to want to pay to skip actually playing the game right?) and additional content down the road.

I fall into this trap too many times. Since I was a child I was obsessed with the allure and mystery of packs random cards; Pokemon, Magic the Gathering, Yu-Gi-Oh. It’s like they distilled this feeling and poured it into an even easier to tap drug that is always so tantalisingly close. There are a lot of games doing this now, some are more egregious about it than others. Halo 5, Gears of War 4, Forza Horizon and Overwatch are some that come to mind, not to mention it being pretty much the standard practice for mobile games like Pokemon go.

It’s weird, because I find the practice varying degrees of disgusting based on the example. On face value, I should be disgusted by Overwatch’s practice, especially now when the Halloween event is on. But nothing they sell actually bars content, it’s all fluff. Just costumes and victory poses, on top of that: they’re cheap. It’s when you get into Gears of War and Halo territory that I start to get unhappy with the whole thing.

Halo barred a lot of its content for its new online multiplayer mode behind card packs, packs which were not cheap. The cheapest being around the 4 pound mark. Gears of the War is similar. As much as I like their Horde mode, the way the game is designed, you can’t get good at it until you’ve levelled up classes and unlocked abilities. This has to be done through the purchase of these packs of cards. Sure you can play the game and use the un game currency to buy one every other day. But wouldn’t it be so much easier to just drop a tenner and buy their “E-Sports pack”…

As easily swayed as I am, those that are less savvy about what they’re buying are getting majorly ripped off in my opinion. Especially when it comes to the big, high profile games. People will be clambering for Battlefield 1, despite it being a Tuesday and most of them are working till the weekend. They’ll still top their One Hundred and Ten Pounds for the Ultimate Edition, despite the fact that CEX is going to have an entire shelf rammed with them in a couple of weeks for a fraction the price.

One thought on “Game Prices are Balls”