Looking through all the reveal trailers from this year’s Comic Con in preparation for something I’m writing,   I spotted something else that whipped me up into a familiar frenzy of frustration. Some background first, I have a friend who is usually more knowledgeable on new movies than I am, and he has been telling me about an upcoming found footage horror movie that might be worth a watch. It was called the Woods and there was some buzz about it.

At Comic Con this year, Lionsgate showed he first real trailer for this “Woods” and made the shock reveal that the movie was, in fact, a direct sequel to 1999’s Blair Witch Project. Simply called Blair Witch 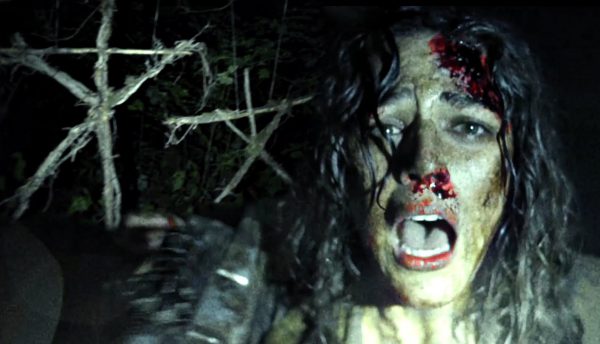 Now, I’ve already done a lot of complaining on here about this. Studios just dragging up old franchises because it’s an easier way to get people in theatres than actually making anything new, creative or (most importantly) risky. I’ve had to endure so many lack lustre remakes and belated sequels this year alone, I’m starting to get animalistic reactions of disgust whenever I see it happen again. They’ve called this Blair Witch to drum up extra interest from giving it the familiar name. In practice, this had made me less interested in seeing the movie because these revisits are always so lazy.

So far this year, we’ve had Point Break, Independence Day: Resuargance and Ghostbusters. Some bad, some mediocre, but all of them pale in comparison to the originals: Smart movies that did something different and took risks. The horrible irony here is that studios are carting out these movies that have withstood the test of time, only so they can make middle of the road, unadventuraous popcorn fluff.

The Blair Witch Project most of all was a huge event in cinema and culture. It was probably the first mainstream found footage movie ever produced and marketed itself as such, the recorded events of some students who went missing and left nothing behind but a tape. The movie had little budget, but did the absolute most it could with its runtime, relying on tone, tension and base fears of things like the dark. The movie didn’t have any jump scares, no moment of release for the tension, it wound you up tighter and tighter until the movie’s end so even the slightest thing could set you off like a coil.

The trailer for the new “Blair Witch” on the other hand is loud and shouty, feeling much more like the modern ilk of horror movie which rely on constant jump scares instead of concern for characters or building dread. Found footage also isn’t enough to make the movie unique either as it became a huge trend to make them a few years back, with Paranormal Activity being the more recognisable horror film amongst the younger generation.

Now, these thoughts are based on the trailer alone, and I know from experience that a trailer isn’t always an accurate representation of what the movie will end up being. For all I know, the trailer added a lot of the loud sound effects to make it a flashier trailer. But at the end of the day, a trailer is there to make you watch a movie, and this trailer, it’s had the opposite effect on me. Anyone who saw and enjoyed the original has to look at this movie and wonder what the hell they’re doing because it seems so off tone and presentation that you wonder if the makers of the trailer ever saw the original.

I will probably still end up seeing the movie, because I’m not going to be called the crybaby that bashes a movie without seeing it. But in terms of studios missing the point of the original movies just so they can make a quick buck by bringing back a recognisable name, this has to be the most departed from the original material that I’ve ever seen. I sincerely hope this is just a bad trailer and the real movie turns out a bit more like the original.

The best horror movies in my opinion are quiet, like the original Blair Witch Project was. This remake, it looks anything but…