This week sees the conclusion of this mini arc featuring Tamayo and Yushiro; who have shown us that Nezuko isn’t the only demon out there that isn’t a monstrous engine of murder, well not when it comes to humans anyway.

This was a strange episode in many ways. As I mentioned in some of my previous episode reviews, events in Demon Slayer seem to be speeding towards a premature conclusion, considering how many episodes have been slated for this run.

It appears the writers must have realised this also, because this episode ends with what feels like an example of brushing a lot of stuff under the rug and hoping that the audience doesn’t notice.

We start with the fact that Tanjiro might have separated the head from the arrow demon, but that doesn’t mean the monster is going to go down easy, and in his dying gasps really rocks the young boy about. Which become problematic when he still has another demon  to deal with afterwards. 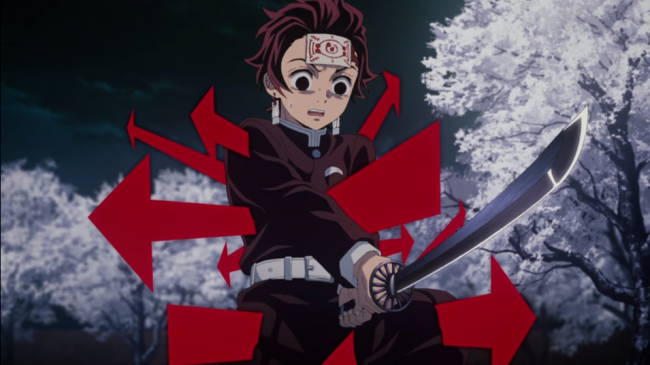 From here we get another bit of insight into Nezuko’s situation from good demons Tamayo and Yushiro, apparently, despite never having consumed a human, which is how demons usually increase their power, Nezuko just gets stronger and stronger. She’s a complete oddity.

Which we see in full effect as she plays a round of Lethal League with the remaining demon and wins the exchange. Despite Tanjiro being majorly out of action, the demon is eventually defeated, I’m not going to say how. But it leans into this show being weirdly more grotesque than you’d expect. I’ll just show you instead.

It’s now we arrive at at the section where someone put a hand on the Mangaka’s shoulder and told him to reign it in a little.

Because, after their death, we learn that these two demons were not, in fact, a part of the Twelve Moons. Mainly because they were too weak. Something that dismays Tanjiro seeing as how they were big trouble to deal with. 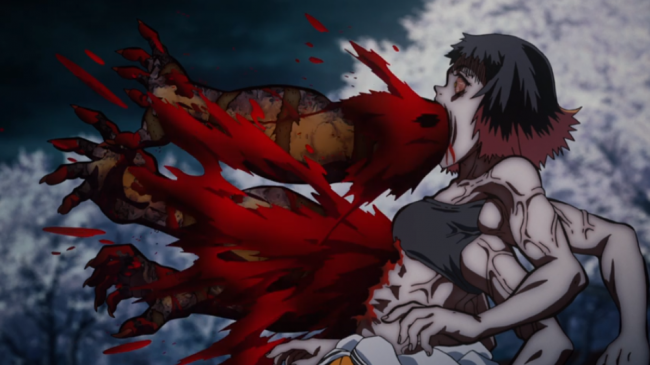 But it makes sense. Tanjiro seems really strong right now, which is good in terms of the pace, but its also difficult to make your bad guys intimidating when he’s killing the equivalent of the Akatsuki from Naruto while the episodes are only just reaching the double digits.

Which is why it gets pulled back I suppose. Not just that though. After this all happens, our two main characters say their farewells to Tamayo and Yushiro and simply leave Tokyo.

Wait, wasn’t Tanjiro in the city to slay Muzan Kibutsuji? Y’know, The guy who is turning people into demons and is also the person who killed his family? I mean, he saw him, and knows he is in hiding with a fake family. Isn’t he going to pursue this at all? Due to his personal grudge that drive him through intense training for years? It feels odd that we move away from that rather major plot point without really mentioning it. But I suppose someone must have agreed with me that this series might have been going a litle too quickly for its own good.

The episode ends with Tanjiro being sent to another job and encountering the cowardly yellow Demon Slayer from the opening.

This episode was good, well animated and packed with some good gore and action. I just think the sudden turn away from the building plot is a little jarring. I know I kept saying that were building to Kibutsuji at a startlingly quick pace, but the fact that we leave that behind without addressing it is a little odd to me.