And now we get to Crunchyroll’s marquee anime for the season, yet another show that comes from Webtoons, a South Korean Manhwa. Coming off the back of Tower of God, I am already seeing a number of similarities between it and this in terms of it’s approach and story structure. But hey, let’s get the line break before I get into it any more.

The God of High School takes place in South Korea, shortly before the preliminary round of the titular GoHS tournament. A fighting contest that attracts entrants from around the world. Which would all seem above board, if not for the opening scene showing the organiser of the tournament displaying cataclysmic magical abilities to crush some rich dudes on an island. So we’ve got that to look forward to after we get bored of the “normal” martial arts.

The show wastes no time jumping right into the action, introducing us to our three main characters who all accidentally meet up in a wacky chase sequence in pursuit of a purse snatcher on a motorbike. Our main character is Jin Mo-Ri, a happy-go-lucky (dumbass) high schooler who just just wants to *ahem* “fight strong guys”. So, y’know, the archetypal shonen protagonist. 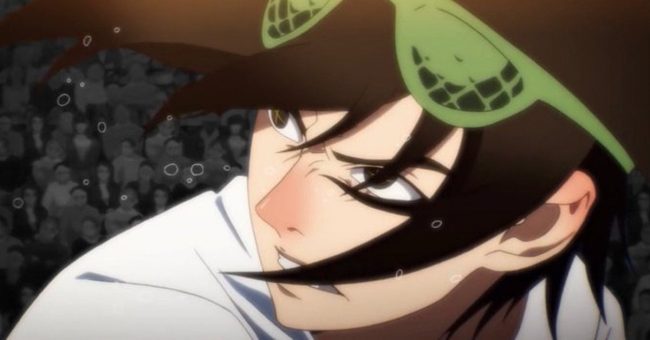 Joining him is Yu Mi-ra; a highschool girl with a self serious attitude which mostly translates to yelling at Jin can calling him a dumbass. She uses a wooden sword as a weapon in fights as effectively as any real blade. Finally Han Dae-Wi; the easy going, powerhouse teddybear.

Right from these early sequences I could tell right away that this series has some talent behind its animation team. I’ve read a bunch of people discussing what God of High School does in terms of its frame-rate choice and it’s use of dynamic camera movements, but I’ll be honest, I am not going to pretend I know anything about animation production. All I do know is that the fight sequences in this show look good as heck.

On top of that, the cast is broad and immediately likeable, even if they all feel like they embody classic archetypes from other classic anime. It’s difficult to take your eyes off the screen when there is a fight scene every few minutes and every single one seems to be pulling off that climactic hype moment usually reserved for an arc finale.

If I did have to criticise anything though, it would be a familiar issue, one that it shares with Tower of God. Which also makes me wonder if this style of storytelling is common amongst Korean Webtoons. The series goes a mile a minute and gives you very little opportunity to breathe and take in what’s being said during the bombardments of exposition.

I mean, everyone has nanomachines in them that heal them after every fight (except when they don’t) along with wrist bands that display their level, HP and GP(?), which weirdly seems to gamify the whole battle tournament process. Or it would have, except these factors kind of just go away after they’re introduced. I know we’re only a few episodes in, but this along with the Enemy Stand! that shows up in the third episode, it’s kind of difficult to find my grounding in this series

Like Tower of God, the series seems to be in such a rush to reach the point it wants to get to that is brushes over the significant world building and exposition it needs get out there within the first few episodes, while not forgetting to cram all these fight sequences in there as well.

Verdict: Of course I’m keeping this one up

Let’s be real, this is the big show most people are going to be talking about this season, and I would be remiss in not continuing it. But even if that weren’t the case, the show does a hell of a job letting you know what it’s about, jumping right into the action with no hesitation with three episodes.

I would be up for more of this show on the basis of how good the fight scenes look alone, but the fun cast, intrigue its set up and the fact that every fight is hype as hell. I can forgive a little issue with pacing at this early stage. Whether it continues on in the same vein and ends up leaving me lost in the middle is another matter entirely.