I spent the last post talking about how much I’d grown to like Zenitsu after really not being a big fan based on his introduction. I ended by saying that the show just needed to make me like Inosuke a little more. Well, as if knowing I’d say that, we get an episode that does glean a little more into the Boar Boy’s history and character.

The episode opens with Tanjiro and Inosuke standing off against Aracno-Dad and having a hard time against the sinewy spider. Before Tanjiro can unleash his previously unseen and most powerful attack, he is thrown into the distance, leaving the injured Inosuke to fend for himself. But not before ordering the boar not to die before he can get back. Events have lined up and left our three heroes in pretty dire straits at this point. Zenitsu is about succumb to the spider venom from the previous episode, Inosuke is up against a demon far too powerful for him to fight and Tanjiro finds himself facing of against the most powerful of the Spider’s children.

Thankfully for our heroes, they get some backup that doesn’t just consist of an army of low rank fodder, all marching into their death. We meet Shinobu Kochō; a perpetually cheerful slayer with a butterfly motif and see the return of Giyu Tomioko; the guy from the first episode who directed Tanjrio into his training.

Up until now, I’ve been talking a lot about how Tanjiro feels pretty overpowered as our main character. Not a complaint, more as an observation. It’s rare to see Tanjiro really struggle against an enemy so far, with the Arrow Demon from a few arcs previously being the one to give him the most trouble. This time though, things feel genuinely stacked against our heroes.

Which is all in the pursuit of showing the mountain these newly qualified slayers still need to climb.

The visual expression of this is the battle between the “father” Inosuke. Against all odds, the boar lad manages to get a damaging strike on the big bloke, only to have the monster bulk up and become far more powerful. When all seems hopeless and Boar Face is on death’s door, Giyu shows up and effortlessly dispatches the twelve moon demon in a classic power scaling manoeuvre.

With the two higher ranking slayers showing up to save the day (despite the already ludicrous body count of unnamed slayers) I feel like we’re sliding into another training arc following the conclusion of this story. We’ve spent the last few episodes wallowing in how badass Tanjiro, Inosuke and (yes, even) Zenitsu can be. 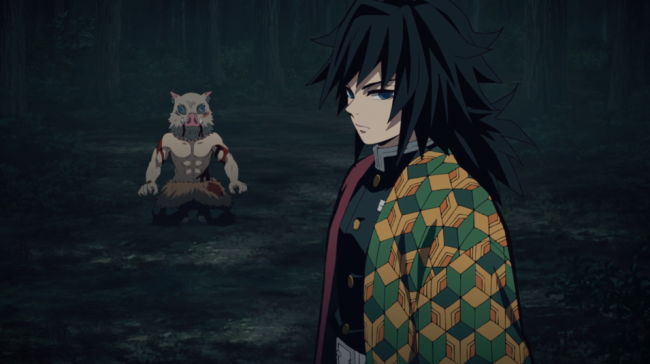 So the classic move would be to knock them all down a peg so we see they still all have a ways to go. Zenitsu and Inosuke seem to be pretty much safe at this point, recused by their senior allies. Tanjiro on the other hand ends the episode on the wrong side of a pretty great cliffhanger in his battle with the sinister silk spinning son of the spider.

Both Zenitsu and Inosuke get some character growth moments here, the first having a moment of girt and determination upon remembering the voice of his mentor, and the latter finally seemingly getting an idea of what this basic humanity thing is all about. Specifically, his burgeoning man-crush on Tanjiro.

Personally, I would like to see the show take a little break from the demon fighting and give a little insight into the inner workings and hierarchy of the slayer corps, we’ve been given breadcrumbs of informtion as to their structure and how they work so far, but since Tanjiro got his sword, we’ve been pretty seperated from the whole thing.

I’m really looking forward to see how things pan out next week and how Tanjiro’s current dilemma will be undercut in the starting moments of the episode, then we can get into a chilled out training arc. Fingers crossed.

One thought on “Demon Slayer – Episode 18: A Forged Bond”