When I moved house and suddenly had more space to put my junk, I found myself revisiting my Wii U. Many would regard the Wii U as a failed console from Nintendo. Especially in comparison to the staggering success of both the Wii and the Switch either side of it.

Personally, I look fondly at the Wii U. Sure, it only had about 15 games worth owning on it, which is pretty dire for the entire run of a console. But those 15 game were totally amazing. Possibly the best being Super Mario 3D World.

Mario is a vast, all encompassing franchises, one that crosses over with basically every other genre of video games. It’s next to impossible to really separate the games starring the character into separate “series” within the greater franchise. But that sure doesn’t stop up from trying to do it anyway.

Video game classification is a weird thing. There is a pretty big crossover in the venn diagram of people who like video game and people who like organising things into categories and lists. I know that’s certainly one of my strange habits. And there has been debate as to whether what actually consists of the “main” Mario series. 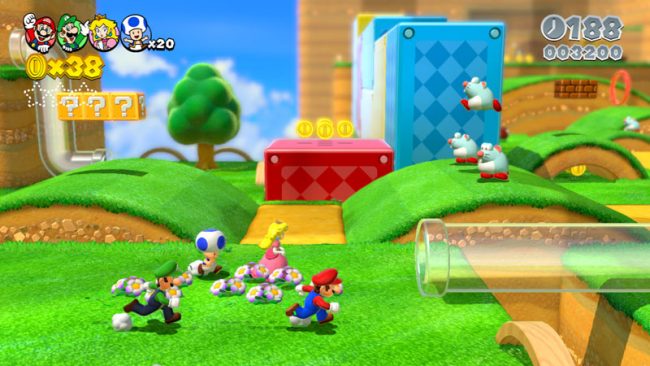 Some would argue that the 2D games of the 8 and 16-bit era are of a different series than the 3d games that started with Super Mario 64, while others would lump them together as the “core” series. Then there’s the argument whether the “new” Super Mario Bros. series are the continuation of the 2D games or their own series again.

Things have become so intertwined and crossed over at this point that even I have no idea what to count as what.

At this point, you’re probably wondering what the hell I’m talking about and why any of this even matters. Well, what I’m getting to is, after playing a whole bunch of 3D World again these past few weeks, is that the game is the perfect blend and encapsulation of both the original 2D games of yore and the 3D games of the more modern era.

To boil the game down to it’s core; it’s essentially the original Super Mario Bros. game extrapolated into a 3D plain. That might seem like a inanely obvious statement, but everything about the design and approach to 3D world screams of the ethos of the original four games (Mario 2 included).

The ‘new’ Super Mario Bros. really feels like a side project rather than the true, innovation of the original franchise. A pale imitation of some of the most iconic platformers of all time, 3D World on the other hand is the true evolution of the original games. 64 through Sunshine, Galaxy and Odyssey became more focused on open worlds, exploration and making use of fewer stages that were revisited over and over.

In that respect, I’d argue that the games that came from Mario 64 are their own, different series of games. They make use of the character, but like the many sports and party games with the red Italian on the cover, they’re of an entirely different genre.

I’d argue that there hasn’t been a true followup to the original style Mario games until the 3D land/World games recaptured the charm, level design and innovation of those original games. And as of right now, there doesn’t seem to be any sign that we’re going to get another game in this vein.

Super Mario Maker is probably a big reason for this. Fans of the franchise were taken by storm by this practically unlimited resource of original style Mario stages. I can understand why, the depth of creativity and out of the box thinking that we’d never dream of seeing in an official Mario stage alone makes these games amazing.

The sequel refined this even further, and it only went and added a 3D world template to this game too. The real shame being that, despite using assets from the follow-up, it still only exists on a 2D plain. I’d say that creating a true 3D World stage using Mario Maker is probably more intensive than the device could manage, but it’s a real teasing move that made me want to go back and play the Wii U game again.

As amazing as Mario Maker is, I’d love to see Nintendo make another game in the style of 3D world, both innovating and harkening back to the original games that got the franchise started. Nintendo are being more prolific and creative with their main franchise this console generation that they’ve ever really been before.

So, while I’m getting hung up on some old game on some failed console, maybe Nintendo are stewing away, working on something even grander that’ll make me realise that I was simply thinking too small.