In a season where nothing much was especially jumping out at me, I took some shots in the dark. Mostly due to a striking visual style and bizarre visuals, Sarazanmai caught my attention. After getting to know the extreme formulaic setup to episodes and repeated animation, I came close to dropping off. After getting to the half way point, I’m glad I didn’t.

After just seeing episode six, the show’s real strengths came to bear fruit. This episode moving away from the repetitive nature of the structure and leaning into the aspects of the show that made it shine. Although I worry that things will go back to the standard format before the finale mixes it up again. 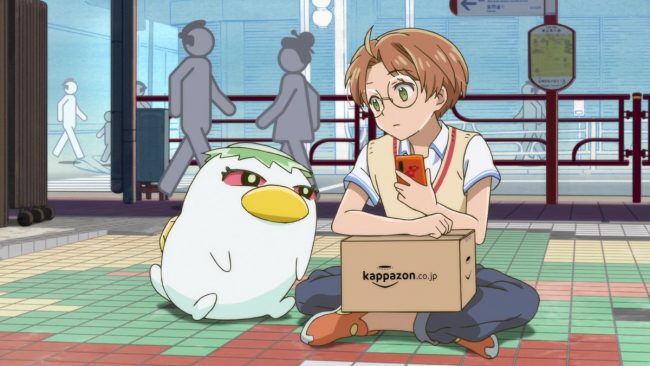 No idea what’s going on

From a cursory glance; this is the most common thought I’ve seen directed in this show’s direction. Used as both criticism and praise strangely enough. Honestly though, I have a pretty solid understanding of what’s going on now I’ve invested a little time into it. The entire show is heavy metaphor for the connections between us as people.

Taking a dive into if the strong connections between people are born from pure desire or a place of true love. Each episode deals with some repressed feeling inside one of the main characters, feelings they keep buried, be either out of shame or guilt. Simultaneously pitting them against a villain of the week whose selfish desires are so strong they’ve been turned into a monster of the week.

During the very visually striking process of defeating the monster, one of the main trio’s feelings are ripped bare as a result, for the others to see.

Much of my early enjoyment of the first handful of episodes came from the airing of the main trio’s dirty laundry as a result of defeating the monster. They often gave some extra insight into the character and usually connected to something that happened in the first act. But it was all so melodramatic that I couldn’t take my eyes off of it.

Ranging from Kazuki’s inability to connect with his brother due to an immense guilt over something that happened between them in the past, Toi mixed feelings at being in love with Kazuki and Enta’s admiration of his criminal brother who he murdered a gangster to protect.

It might have seemed soft and fluffy on the surface, but just from reading that last part, you can see it’s anything but. It gets real juicy real fast, in a way that is difficult to turn away from. Despite the cutsey look on the surface level.

To top it all off, after the credits of each episode there would be just one more revelation that would just keep piling another layer on top of the car crash that were these character’s lives. My jaw was hanging at the pure melodrama of it all.

The show deals with all of these things in a pretty open and nonjudgemental way. It begins with them all dealing with them as secrets they want to repress out of guilt, criminality or social stigma, but even after the three find out about each other’s dirtiest secrets, there is never a moment of judgement between them. The three accept one another, if anything they become all the closer for it.

It’s one of the reasons why it ended up turning me around. In the most recent episode, the boys are unable to defeat the monster because Kazuki’s guilt became too much for even him to accept. So he tried to disconnect himself from everything. Only through the support of his friends does he find the strength to move past it and act out of love rather than selfish desire.

Don’t get me wrong though, it’s still weird

In all I’ve spoken about I haven’t even mentioned the stick men crowds, the fact that the boys turn into Kappas or that there is some eternal war going on between the Kappa and Otters, the musical numbers or the fact that they jam themselves into a monster’s anus to defeat it. It certainly has a distinct style to it, one that could easily distract people from the message at the show’s core.

While I am very positive on it now. I am worried that the the show will go back to its formula of tearing us away from the character drama to show us the same transformation and battle animation with the monster of the week. Which is always kind of jarring because as nice as it looks, it’s not why I’m coming to the show.

I’m invested enough that I’ll most likely stick it through to the end. But there is surprisingly little buzz surrounding this show despite some really great things its doing, y’know behind all the insanity. If you’re not watching it now, maybe wait till its over. Then you can cut a good chunk of your watch time down when you get the the Otter Cop’s dance number for the upteenth time.