After last week, there wasn’t a whole lot Jojo’s could do to shock, astound or revolt me that much again… and it didn’t. What? 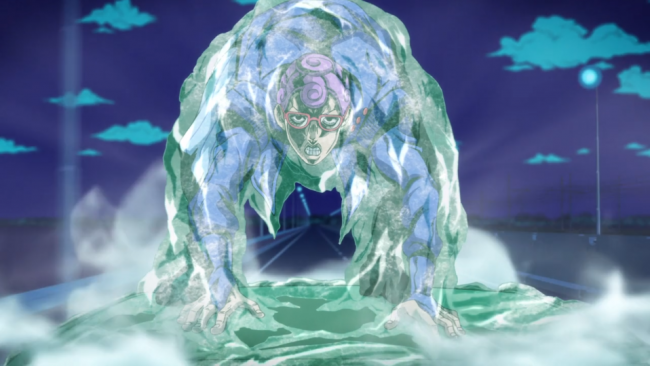 After the very memorable and disturbing introduction of Melone and his impregnation stand in the previous episode, episode 18 felt a bit more like a return to the villain of the day formula we were getting before the Thankful Dead two-parter. Which left me slightly disappointed if I’m really honest.

The episode begins as last week’s ended, with a piranha bursting from the body of the enemy stand after tearing up its insides somewhat. From here, the battle proceeds as you’d imagine, with the enemy getting one final strike on Giorno before having a motorbike materialise inside him, leak fuel and explode, you know, standard Jojo stuff.

What did surprise me though was Melone’s exit from the train and assurance that as long as he had Burraci’s blood from his battle with Pesci, he would be able to track his movements with his remote control stands. Suddenly, he gets bitten in the tongue as he eyes up another woman. Apparently Giorno’s stand could make something into an animal over a great distance? As much as this guy was huge creep, he seemed like a sinister and threatening villain that would be difficult to deal with. To see him taken out in a way that makes him seem like an afterthought is a little anticlimactic. Then again, we didn’t see his body mangled or exploded, so maybe we haven’t seen the last of Melone after all.

With the gang back on the road, they’re given a clue as the location of their next orders, thanks to Abbacchio using Moody blues to rewind the events within the turtle 14 hours. Rather than all entering Venice all together, Girono and Mista are sent ahead alone to pick up the clue when they’re attacked by another enemy, this one with the ability to freeze the air around him into thick ice.

Mista really doesn’t seem to have much luck this series, he seems like the Polnarif of part 5 to me. First he gets aged and popped in the head with three bullets, now he loses a finger to extreme frostbite and has his nostrils and eyelashes frozen together. I guess Giorno will able able to make and attach a new one for him now he has figured out new powers for his stand during that last fight.

The duo manage to repel the ice man momentarily before he manages to Terminator 2 his way back onto their car, causing Girono to bust through the barrier and plunge the car into the water below. Maybe not a great plan against a guy who can freeze things. But hey, Girono’s insane leaps of logic have been working out for him so far in this series, so let’s see where he’s going with this.

I’ll be honest, as much as I’m getting a kick out of Golden Wind, it’s difficult to write much about it week to week. It’s not a deep show by any respect. It’s one that puts all its stock in attitude, style, action, “manliness” and “coolness”. As a result, there isn’t a whole lot to judge the show on when it comes to the depth of its story or characters. It’s a show about a world of totally insane people doing insane things. Bringing logic into things really doesn’t do it any favours.