After last week’s Nintendo Direct, I finally decided to put my hand into my pocket and shell out for Nintendo’s online service. The service that had been, up until a few months ago, free for everyone. Amongst the primary reasons for me finally paying the startlingly reasonable price for the service was the release of another, brand new Tetris game.

Tetris 99 is the unholy union of the most iconic and well loved puzzle game of all time, and the Battle Royale genre. An idea as ridiculous as it is obvious. And having played a couple dozen games of it, I’m amazed that all of my common complaints about every battle royale game I’ve played before now manage to apply to this game too.

Coming out almost right after the Nintendo Direct, Tetris 99 is free to download exclusively for the Nintendo Switch, granted you have access to online play. Once you crack into the game, you’re presented with a startlingly simple menu: Only a single game mode and a few basic control options.

Being free to play has worked incredibly in the game’s favour, I can’t think of a time where the 99 required people for a game haven’t popped into the lobby almost right away. This means I was tearing through games at a lightning pace, getting out and back in again without even giving myself time to cool off after the previous game.

Although maybe that’s more of a commentary on my skill with the game than anything else. I’ll be honest, when I downloaded this game, I was expecting to boss people. I would say that my skill at Tetris is good, but not great. But playing games of 99; I found myself getting brutalised.

Said brutalisation was not a mere result of my lack of skill though, although let’s be real, it probably was. No, the reason that some games would laugh in my face and boot me to menu while I was still placed in the 80s, it came as a result of one of the classic tropes of the Battle Royale genre that I often find so frustrating.

Something I went into more detail about when I spoke about Apex Legends, which you should read too. I oftentimes find Battle Royale games frustrating due to the randomness associated with finding the equipment and encountering people who were just dealt a better hand than you were.

While Tetris 99 is no first person shooter, there is definitely still a competitive element to it; by making lines, you build up trash to send to other players and make their lives more difficult. With there being so many other people playing and your focus being almost entirely on your own well, directed attacking it nigh impossible.

When it comes to directing your trash, your options are pretty much limited to target the people who’re targeting you, targeting the player who has the most knock outs, or just attacking at random.

As competent as I feel I am at playing Tetris, sometimes the game is just stacked against you. There have been games where right away, I am alerted that I am being targeted by five or six people. A minute or so later I get three 4-stacks of trash pushing my well right up to the top, with an alert that there is more to come.

In these cases, skill alone will do nothing for you, as you get dog piled by a whole bunch of other players. That is the nature of a Battle Royale though I suppose. It can be frustrating, but an element of luck is nearly always in play in these kinds of games, especially if you’re not in the top 10% when it comes to you level of skill.

My first handful of games were a harrowing experience, one that forced me to rethink my entire approach to this game I’d been playing for nearly 30 years. I started by trying to play how I have been playing the Tetris Effect, building up large stacks in order to create large Tetris combos. Doing that is neigh impossible here, unless you’re lucky enough to not get targeted by anyone in the early stages of a match. 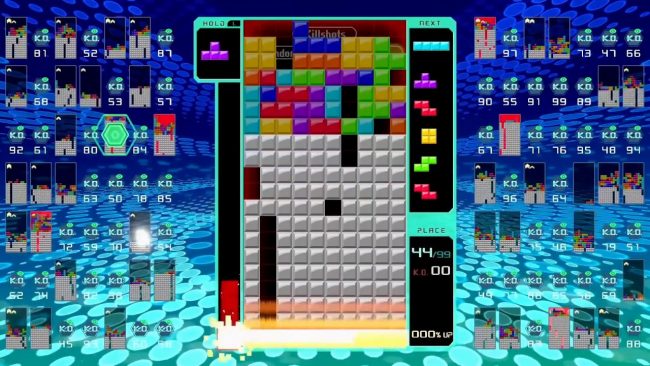 I quickly had to learn to make a lot of quick and dirty combos in order to fend off the oncoming trash and send it back at my attacker. I don’t really have any experience with competitive Tetris, despite the fact that there have been a ton of versions of it available before now.

The more I played, the more I started to learn how to play this particular variety of Tetris, learning that the speed increases when 50 players are eliminated and then again when you get to the final ten. It might reduce again after that, but so far I have been unable to place higher than 8th in a game. As you knock more players out, you gain badges, and the more badges you have, then the more trash you can send towards other players.

It makes you begin to think about getting quick knock outs early so you become a more powerful trash master in the late game.

Even when you reach the higher reaches of a match, game’s don’t last a huge amount of time. The problem this causes me is infecting me with the “one more match” syndrome. A disorder in which the games are the perfect length for me to think nothing of playing “just one more”. Which inevitably turn into just eight more.

Taking this all into account, it’s an odd one to think about really. With it being Tetris, there is no sense of individuality, or a sense of your opposition. While other games in the battle royale genre are rife with skins, dances, stat boasting and other ways to show how great you are, there is very little of that in Tetris 99.

Your only real stats seen by other players are your name and your level, and even those are only visible after your game has ended. During a game, every other player is represented by a well in the background, filling or emptying of tetriminos.

It makes me wonder if Nintendo have any intention of monetising this game going forward. While Apex Legends is free to play, there has been a lot of talk about how expensive their cosmetics are to buy, coupled with the limited drop rate for items after a certain level has been achieved.

As far as I can tell, there is nothing in Tetris 99 that you can pay any money for. It makes me wonder if Nintendo are just taking it on the chin and using this game to help them sell more people on their Online service. Which seems to be a better deal all the time between this and the free NES games being offered too.

Tetris 99 is a short and sweet game, one that bends you over and brutally shows you how little you perceived skill at Tetris actually amounts to. I can really see this being the type of game I pick up if I’ve got a few minutes to kill. I just wonder if Nintendo have any plans to ever expand upon it, or if this what they’ve put out into the world.