People like to think Pokemon are simple little games for simple minded children, games that stay relatively the same throughout each of their iterations. When in reality, nothing could be farther from the truth. The Pokemon games are jam packed with so many dense game mechanics that it would make your head spin.

You’d be surprised at how many features end up being thrown to the wayside as newer games come out on newer technology. Whether they be one time experiments, or mechanics that evolved and were replaced with something else. I like to talk about my hopes for the future of the Pokemon franchise a lot on here. But today I thought it would be fun to go back and list the best lost mechanics from the Pokemon main line franchise.

Introduced in Gold/Silver, and then perfected in Ruby/Sapphire

These games gave the player a space to call their own, decorating it with posters, cushions, dolls and other furniture they find along the way. What made the room decoration so cool in Gen 2 was that saving money with the player character’s mother would give you a set number of things, but interacting with the game’s mystery gift mechanic was how you got the rest of it.

Having that hard to get stuff made me feel weirdly exclusive, in a time where connectivity between games was still a novelty. Speaking of which, the secret base mechanics in Gen 3 took this idea and expanded upon it, placing a ton of caves, trees and bushes in the world, any of which could be turned into a secret base and then decorated much more freely than in the games that came before.

On top of that, connecting to other people’s game’s allowed you to find their bases in your own game and battle a computer controlled version of their team in your game. It was great fun showing off you base, but also being able to battle their teams and get Exp and money for it. A great late game tactic for filling out that Pokedex that didn’t involve battling the Elite Four over and over. This was expanded upon again in Diamond/Pearl with the underground, although not in quite the same way… speaking of which…

Introduced in Diamond/Pearl, then brushed under the rug never to be seen again

I know a lot of people hated the underground. I thought it was cool though. Firstly, it was the first in-game space two players could occupy at the same time that wasn’t just an empty room. Allowing players to set traps and steal one another’s flags from their (not as good as Gen 3) secret bases.

That’s not really why I liked the underground though. That vast, barren space was pretty dull to be honest. What it did provide though was an unlimited resource. Through the underground, player’s had access to an unlimited number of evolutionary stones, fossils, certain held battle items and heart scales. The only resource the player had to expend was their own time and the lifespan of their touchscreen as they tapped away at the rock to reveal what was beneath.

I know a lot of people hated the underground, but a place where you could just farm heart scales and money with relatively little effort was something I always miss when I have to grind rare hold items to something that used to be trivial to get.

Introduced in Emerald, then making its second and final appearance in Platinum/Heart Gold/Soul Silver 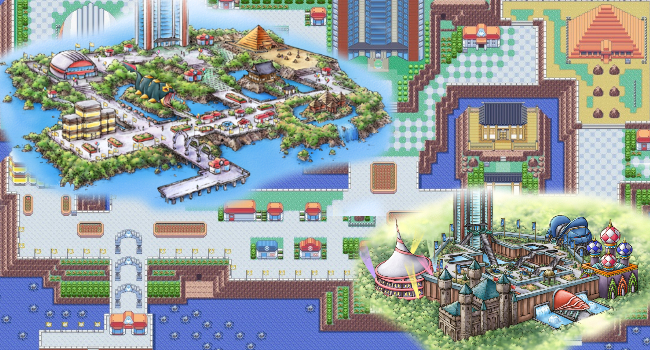 Generation 3’s Battle Frontier is the post game high water mark I always wish the games would revisit. Both Emerald and Platinum had different versions of the Battle Frontier and they made for a fantastic reason for me to begin pursuing the franchise’s complex IV and EV mechanics while not having to get involved in the bollocks of playing against other real people.

The Battle Frontier was a Pokemon battle amusement park, eight/five huge buildings that all centred around a different battle gimmick. One made you rent Pokemon from them, another only allowed you to chose a single Pokemon to battle with, one had your Pokemon chose their own attacks (which was based on their nature.)

These battles were all really difficult, the most challenging thing I have ever encountered in a Pokemon game. And as if to add a cherry to this pie, they added their own form of progression to them, akin to the gym badges of the main game. Getting a frontier symbol felt like a real big accomplishment to me, and I was proud of myself for getting the few I did.

It was the thing that got me to start dabbling into EV training and brought a form of challenge to the main line Pokemon franchise that I desperately want to see return. As they only seem to get easier and more accessible as the series ages. There came a point where Game Freak started catering more to the weirdos that took their game too seriously. Weirdo’s like me. Adding short cuts and ways to speed up the process of accessing hidden abilities, breeding IV and training EV that were required to make “competitive” ready Pokemon.

The Dex Nav from Omega Ruby/Alpha Sapphire and the Friend Safari from X/Y were a huge step in making these aspects of the game more accessible. Both of these mechanics allowed players to gain Pokemon guaranteed to have perfect IVs in some way, making the process of starting to pass them on much easier. They also gave player’s easier access to Pokemon’s hidden abilities.

Some of which are far more useful than others. I’ll never forgive them for giving Torterra shell armour instead of something like Guts or Sand Stream.

The Dex Nav is ever better because it does away with the need to find real people with the Pokemon you want and allows you to just keep battling over and over again to find Pokemon with Perfect IVs, hidden abilities, access to egg moves or even a better chance of finding a shiny.

The Dex Nav is the thing that really made enjoy my current Run of Omega Ruby after taking a break from Pokemon for a year. Again, it introduces a sense of exclusivity in that you made the extra effort to find a Pokemon with a move it shouldn’t really know or an ability that can change the way you use it.

Dabbled with since Gold/Silver, Seasons only appearance seen in Generation 5

While this isn’t really a feature that went away necessarily, it’s one that has seen wildly inconsistent use from game to game. When it was introduced in Gen II, the time and date were a big factor in many aspects. Different Pokemon only appeared at certain times of day, certain NPCs and shops were only open one day a week.

Events like the bug catching contest felt like something you had to make the effort to participate in because you could only do so once every few days. When it became easy to manipulate the game’s time due to the easily changed system clock of the Nintendo DS, Game Freak made much less use of this feature. But the feeling of having to make the effort to do something at a certain time brought another fun aspect of exclusivity to certain items and Pokemon.

I am a Gen 5 apologist in a lot of ways, because I loved a lot of things and risks they made with that game, one of which is their incorporation of seasons. This was something that was unique to the location the game took place in, probably not suiting the vibe of Sun and Moon’s Hawaii setting. But a further layer of time in the games outside of the time of day was really cool.

Vastly changing the landscape each week, meaning that if you missed an item, you would have to wait three weeks for your next chance to get it. Sadly, this is probably an idea I appreciated more in theory than in practice, because if there was something I really wanted in game, the I, too, would probably end up just adjusting my game clock instead of waiting it out.

It feels like something that would find new life in a game with a more MMO feel to it than we’ll probably get out of a Pokemon game though.

I’m excited to see what Gen eight has to offer. I never ended up picking up Let’s Go Pikachu/Eevee because of its stripping down of mechanics ironically enough. Removing Pokemon abilities and hold items from the game entirely. I hope whatever the new game is, they just keep adding the layers of complexity, something to appeal to the hoards of Pokemon fans who’re now in their 30s.

I’m happy a lot of people rediscovered their love for the franchise thanks to Pokemon Go and subsequently Pokemon let’s go, but the more they lean into broadening their audience, the less I find myself interested in playing their games.