For a long time, as a western Dragon Ball fan, I’d see these videos pop on on Youtube. There was often little to no context to them. They seemed like these wondrous pieces of fan fiction turned into real art and animation for Dragon Ball. Eventually, down the line I realised they were trailers for a Japanese arcade game that was skyrocketing in popularity: Dragon Ball Heroes.

The card based video game had these little trailers associated with them, ones that seemed to become more and more outlandish and fantastical from a fan’s point of view. It was like looking at a young fan’s toybox being turned into well animated snippets. So, when the announcement that Dragon Ball Heroes was getting an actual promotional anime, everyone’s interest was piqued, mine included.

This new series, called Super Dragon Ball Heroes, just to be clear, was never intending to be a full length series. Instead, it’s the mash-up of timelines, realities and fantasies from the franchise turned from brief, contextless clips into a series of eight minutes episodes that fill this action out with some “plot”.

I might already be tipping my had a little, but I’ll give a brief overview of the events of the first two episodes before I get into my feelings on them. The first episode starts with Goku and Vegeta training on Beerus’s planet before being informed by Mai that the Future Trunks has been taken and held captive on the “Prison Planet”, a collection of planets held together by giant chains.

The series villain”Fu” shows up, claiming to be Trunks’s friend and lures the trio to the Prison Planet too, where they find themselves trapped. In order for them to escape, they need to collect seven special Dragon Balls, each held by a powerful enemy. So, a video game plot basically. Then the “Xeno” version of Goku shows up, who proceeds to turn Super Saiyan 4 and fight regular Goku in his Blue form.

This was the event that drew many to the series, seeing the two powerful forms from the two different sequels to Z fighting one another. It’s the pure fantasy that makes people so interested in the show. It’s a shame the fight was a total let down. It wasn’t a surprise occurrence because it’s already popped up in one of the Heroes trailers, and for all the content of the actual battle in this anime, you’d have been better off watching the the video game teaser version of the fight.

Their tiff is very brief, if you can call it a tiff. If anything, the fight in the trailer was better despite being even shorter. And obviously, there is no clear stance given on which is stronger. Fu then reveals his villainy and teases the upcoming evil Saiyan villain: Cumber. And yes, as far as vegetable Saiyan names go, that might be the dumbest. Also, Cooler shows up.

Episode 2 starts off with Cumber escaping his Mustafar looking prison and assaulting Goku and Vegeta, the Xeno Goku has mysteriously vanished. While fighting back, Goku becomes infected with Cumber’s dark aura and goes into a berserk rage, attacking anyone nearby. As this happens, Trunks shows up having escaped from his cell along with Cooler who proceeds to use the Golden transformation Freeza uses in the Resurrection ‘F’ movie.

Trunks fights off Goku while Cooler attacks Cumber. Goku snaps out of his rage to see Trunks and Cooler getting their asses kicked by Cumber. Him and Vegeta quickly and suddenly decide to fuse into Vegito and that ends the episode. I felt this episode was better than the last because it was pretty much entirely battle, with little bits of plot and dialogue thrown into the cracks. There’s a lot going on and anyone not versed in the Dragon Ball lore probably went cross eyed from all the proper nouns in there.

Between the two episodes, there was some great fan service and some actually decent fight animation. Which is why I imagine many are coming to this promotional series. Here’s my hot take on Super Dragon Ball Heroes though, you needn’t bother. These episodes are fine for what they are, which is a collection of reanimated clips from the game trailers with some loose plot to tie them together. You’d be just as well served to go and watch a compilation of all the trailer for the game on Youtube. There’s more going on then those in the same amount of time.

I do like watching those trailers on occasion, what I get out of them was just seeing the little snippets of things we’d never actually see in the main series, briefly animated or throwing an odd punch. Things like an adult Gotenks, Super Saiyan 3 Trunks or Vegeta and fusions between characters we’d otherwise never see. It’s pure fan pandering, which is the point. It’s promoting a video game.

The thing is, these little clips of characters like “Vegeks” make you want to know more, when in reality there isn’t anymore to it beyond what you’ve seen. It entices you in to see what the game is about and if they expand on these things. Thus, when we got the anime, people thought we were going to get context and an expansion to these battles teased in the trailers. That’s not actually the case.

The fan service aspects of the anime don’t actually extend much further than what we see in the video game trailers. You don’t see which is stronger between Super Saiyan 4 or Super Saiyan God, you’ll not get any character development that doesn’t just parrot the main series. 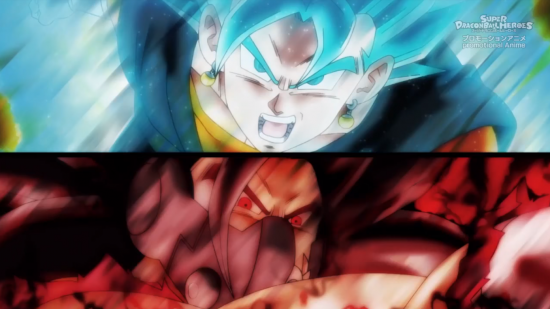 If you really want to search this out, I’m not going to say you shouldn’t. Ultimately, it’s short and does what it needs to do. It’s just paper thin and actually hasn’t done anything as of yet that we haven’t already seen in the video game trailers themselves. It’s nice to be getting some new Dragon Ball animation while we wait for the movie at the end of the year, but as I said before: It’s hardly skin deep. I’ll keep watching them, just because they’re so short, but there is absolutely nothing groundbreaking here. Not in terms of content or animation, which is fine but not amazing. It is what it is.