As if to keep their momentum going, Bungie put out a pre-recorded live stream in which their revealed their new expansion that’ll come out in September as the game rolls into its second year: Destiny Forsaken. I watched the stream a couple of times and thought I’d give my impressions considering I’m in a pretty deep Destiny hole right now.

The stream kicks off by revealing the new area coming with Forsaken, taking us back to the Reef. An area that first appeared in The House of Wolves expansion of Destiny 1. It appears that there has been a mass breakout from the Prison of Elders and many of the encounters in the new area seemingly reflect this, mixing all of the enemies in the game together. The stream states that the tone of and feel of the expansion is slightly different. Everything seems to look very ethereal and has a real fantasy look to it, coupled with the fact they say they took inspiration from westerns makes for an intriguing mash-up.

The stream is pretty light on story as the full story reveal is intended to take place at E3, so from here we get into a lot more mechanical stuff. 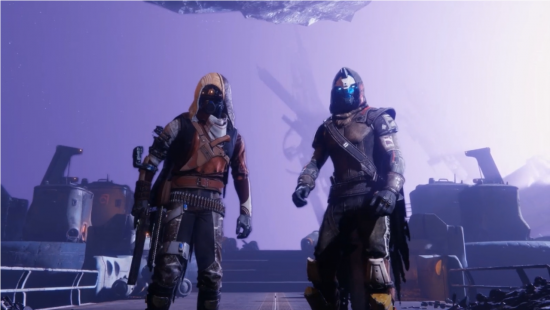 From here they jump right into the weapon changes in the game, something that a lot of players have been eager to learn more about. Especially with the continuous changes made after the changeover to Destiny 2. The actual mechanics of the new system weren’t dug into too deeply, but it appears that you can put any weapon into any slot now. At this point, it’s not possible to tell if a primary shotgun is balanced for that slot or if they’re equally powerful no matter what. It’ll be interesting to see how they manage this, or if they’re really just letting people do whatever they want.

After this they quickly confirm that random weapon rolls are coming back to the game. This is something I’ve been looking forward to for a while, once again giving the potential of any drop to be something worth getting exciting about. From there they get straight into taking about a new progression system for weapons similar to the masterwork system.

So the more you invest into a particular gun, the more you get back out of it. It seems like a great double down on the masterwork concept in my opinion. If kind of feels like Bungie are less anxious about making weapons overpowered in the game again after how sketchy they were about weapon balance when Destiny 2 first came out. Between this and the slot changes, the game is going to feel very different going forward.

A Bow and new Supers

While we’re on the subject of weapons, there is a new weapon type coming to the game. A bow. It seems there are multiple types of bow, tuned for short, medium and long range. The way they describe the bow, it seems like a single shot kill weapon that could potentially be very powerful going forward in the right hands.

From weapons, they jump to new Supers, it’s not entirely clear whether these are entirely new subclasses, or just an alternate super ability in the existing subclasses. We see a selection of new abilities though, including hunters using “Fire Knives” as well as a new void class, titans with a Rise of Iron style heavy solar hammer. They also show the hunter arc strider using a reflect ability and a number of new abilities for both the void and arc warlock, which the streamers themselves say, appear very anime. 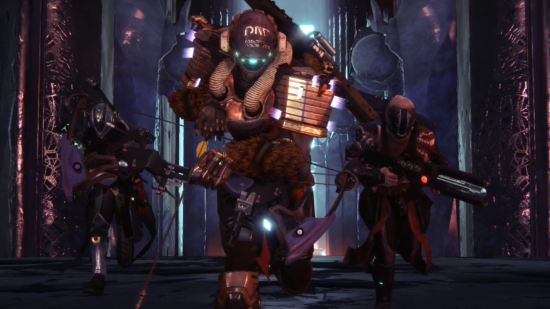 With new gear and abilities out of the way, Bungie showcase their new mode within the game, called Gambit. The mode looks to be a melding of PVP and PVE modes, in which two teams compete to kill waves of enemies the fastest. The interesting spin comes from the fact that a player from one team can invade the rival team and put a stop to their progress. It seems like a real cool concept I’d like to see more in practice.

There is a risk/reward style of play where you actively need to decide the best use of your time. Do you fight enemies and collect the mote resource, invest time in fighting a boss, bank what motes you have before it gets locked down by the enemy team or do you run rampant in the rival team’s zone and slow them down. It’s a new mode that’s getting its own node on the map screen. It’s going to appear a both E3 and “Guardian Con” right away afterwards, so it’ll be interesting to hear some fan reaction after these events.

Then we get the Raid. It’s a brand new raid, with more bosses than any previously. Based in a huge area called the Dreaming City. They talk a big game about the new raid, saying it’s huge and has more secrets to discover than any raid before. Leviathan has never really held that same level of mystique that the older raids from the first Destiny.

I can see that they might be getting some of that back though. Bungie claiming that things within the City will change over time based on player action. While that sounds great in concept, they’ve made similar promises before that didn’t exactly turn out to be what they sold us. To be fair though, what little they show does have a great science fiction fantasy aspect to it.

After the prerecorded section of the stream is over, developers Steve Cotton and Scott Taylor appear live to give some more information about the game going forward. They don’t give a whole lot more information about the game that we didn’t already gather from the segment before. They dig into a new triumphs system as well as a collections system which give players more reason to go back and repeat older content.

Probably the most significant piece of information that comes from them though is the announcement of an annual pass for the following 12 months of the game after Forsaken comes out. 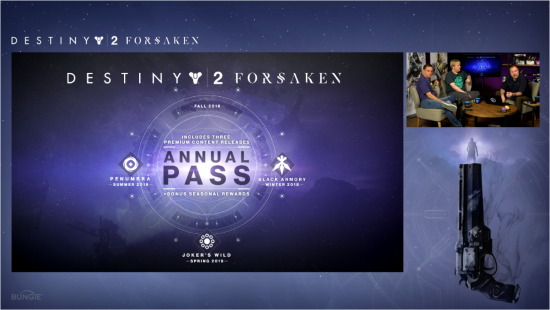 The graphic on screen shows three titles, along with loose dates; Black Armory in Winter 2018, Joker’s Wild in Spring 2019 and Penumbra in Summer of 2019. They go onto explain that they’re changing their approach to expansions for Destiny 2 going forward. Unlike Curse of Osiris and Warmind, these expansions will have less of a focus on cinematics and story lines, and instead will focus on player engagement.

The Pass will include more endgame challenges, activities, new weapons and armour and handfuls of new goals and things to accomplish. While this might sound like a step down from what we’ve been getting so far, I could see it being the best decision they’ve made in a while. While the focus on story has been a huge improvement from the first Destiny, players want to invest time into the game and feel rewarded for doing so.

Stepping back from time intensive story construction could provide Bungie more wiggle room to give us more of the stuff we actually spend time doing. It’s not to say these expansions will be devoid of lore all together, but it will be integrated into gameplay more. The worry is people will just focus on the paid aspects of these expansions. People seem to have this rigid expectation that they only pay money for story in a game like Destiny, and criticise it for charging for anything else. Then moments later will drop a ton of money on cosmetics in Fortnite.

While I didn’t walk away from this stream as obnoxiously giddy as the entire Twitch stream chat seemed to. I am completely positive about the things Bungie spoke on in this stream. They’ve been more than clear that they’re listening to what fans want out of the game for a while now, and this stream feels like a real culmination of all of those desires.

It was positive change after positive change that actually does feel like it could be the total game changer that the Taken King was for the first game. I am feeling pretty good about Destiny 2 at the moment off the back of Warmin. The announcement for Forsaken has made me excited again. This was all good stuff and suddenly September feels like an incredibly long way away.