My fumbling around in the world of Anime continues this evening. Flip flopping between video games and anime as I write these has been more tricky than I had expected it to be. One more lesson to go into the pot of things I’ll probably forget by the time I get around to doing this again next year. 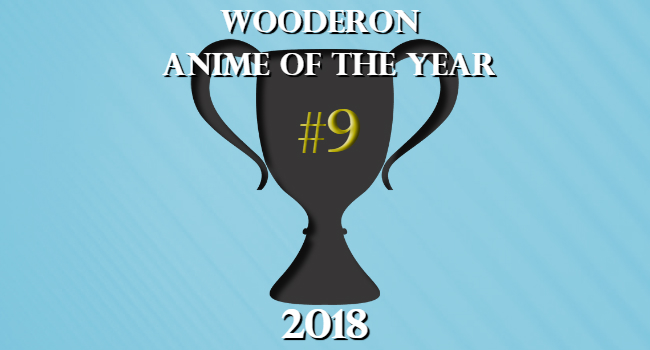 Today’s entry is another late season show. I dabbled with the idea of leaving this show off my list entirely, with how little of it I’ve seen. But with each passing episode, I find myself enjoying the show more and more. I felt like I needed to give it some recognition for how much enjoyment it gives me. That being said, I really will have to figure out a better way of organising these lists next year. Hey, if any other anime bloggers out there want to give me their thoughts on it, feel free to do so.

Like in my video game lists, I’ll list and link my previous days entries before getting onto today’s:

END_OF_DOCUMENT_TOKEN_TO_BE_REPLACED

Prepare yourself gentle reader. This year, I have decided to try something a little new. Seeing as how a combination of different Youtubers including Gigguk and Team Four Star’s short lived anime show AnimeFMK got me back into subscribing to Crunchyroll and actually watching anime again, I thought why not list the ten best anime I’ve watched in 2018.

A word of warning though, this will be the most generic, unadventurous anime list you’re going to read on this topic. But hey, give me a break, I’m just starting to get the hang of this.

I had a hard time trying to decide the criteria for this list, seeing as how a lot of the anime I watched both ended in 2018, or began and are still ongoing this year. So, at least for this year, I am going to simply say, to qualify for this list, the show simply has to have aired some significant amount of its airtime in this calendar year 2018. Next year, I’ll probably figure out something that makes a little more sense. But for now, seeing as it’s the first time I’m doing this, then why not just wing it.

END_OF_DOCUMENT_TOKEN_TO_BE_REPLACED

Outrage and disgust were the general sentiments surrounding Goblin Slayer when I first heard about it. Obviously, an anime as foul and disgusting as this would be something I could at least get an interesting blog out of. And so my sense of morbid curiosity once again got the better of me. And while the reasons behind this reaction were glaringly obvious, I continued to watch it. And in a way, I kind of like it.

It’s not to say there aren’t aspects of the show doing their best to try and drive me away. The main problem Goblin Slayer has is an excess of edge. In what is otherwise a well constructed and interesting world. I’m just teetering on the precipice of walking away from this show in disgust.