Outrage and disgust were the general sentiments surrounding Goblin Slayer when I first heard about it. Obviously, an anime as foul and disgusting as this would be something I could at least get an interesting blog out of. And so my sense of morbid curiosity once again got the better of me. And while the reasons behind this reaction were glaringly obvious, I continued to watch it. And in a way, I kind of like it.

It’s not to say there aren’t aspects of the show doing their best to try and drive me away. The main problem Goblin Slayer has is an excess of edge. In what is otherwise a well constructed and interesting world. I’m just teetering on the precipice of walking away from this show in disgust.

How it hooked me

I’ll begin with a tangent. I am distant Dungeons & Dragons fan, by that I mean I am fascinated by the game itself, but have neither the time nor the required number of interested acquaintances needed to play the game myself. And so I must appreciate it from a distance.

The idea of the total freedom of creation when it comes to creating stories with a group of friends, making a world for you all to exist in for a couple hours a week… As a daydreamer who spends a lot of time inventing characters and stories in my head, it has always fascinated me.

Goblin Slayer is a story with very clear and obvious allusions to the game. Hell, there are dice rolling around in the opening. As soon as I realised the titular Goblin Slayer and his group of adventurers were playing out the roles and tropes of a D&D group, I was suddenly hooked.

In some respects, maybe it lives up to the inspiration a little too well. Because this particular campaign seems to take place in the world created by a group of hormonally charged, 13 year old boys. One in which every female is desirable, and simultaneously all desire the protagonist, despite the fact that he has all the personality of a brick.

Not only that, the show has a very casual attitude towards violence against women and a unpleasantly titillating portrayal of rape. It makes the show, at times, very off-putting.

The first episode of the series sets the scene for what is to come. In it, an unnamed priestess (as none of the characters are named directly) joins a new adventuring group who take on a quest to slay a cave full of Goblins. Almost right away, the group of ambushed and picked apart, the lone male in the part is mutilated and graphically cut apart, the two other women are beaten to the ground, have their clothes ripped of and are raped by the goblins there and then. 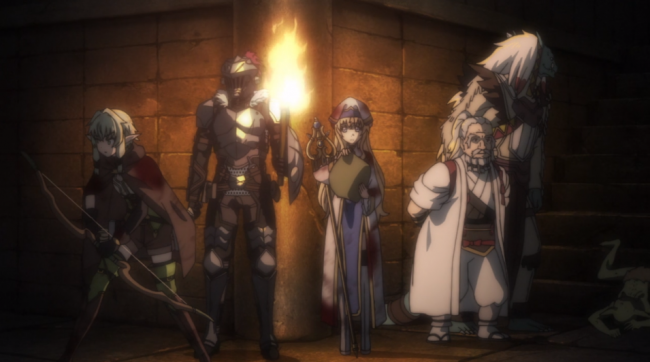 It’s only through the sudden appearance of the titular Goblin Slayer is the priestess saved and we see the goblins all brutally murdered by the Goblin Slayer using traps, fire and no remorse. He even cuts down their children as they cower in the dark.

No episode is quite this brutal and sadistic after this one, but it’s a theme that comes back over and over. The Goblin Slayer is a mostly mute man encased in banged up armour who, despite his high rank, exclusively hunts goblins with a relentless passion. He’s shown to be very quick thinking and resourceful in a way many other adventurers are not, yet he hardly displays any emotion.

Despite this, somehow all of the characters are drawn to him, most of the females who meet him end up fawning over him, despite the fact that it’s rare for him to utter more than a single word to people when in conversation.

Too much male gaze

I’ll put my hands up and say I am pretty simple minded when it comes to the anime I watch. I like flashy fights, heroes beating the odds and masses of hype. Goblin Slayer has that, but it also has the excess of the more negative aspects of the male gaze. We’ve seen almost all of the female main characters naked at some point or another, and for no real reason.

Sure, there’s fan service in all anime directed towards a male audience. It just feels excessive, especially when so many other aspects of the show are so good. The world and character design is great. And aside from a few clunky looking computer generated shots of Goblin Slayer, it’s really well animated too.

The situations the party find themselves in are always thrilling and keep me wanting to know what happens next. Going back to the D&D connection for a moment, more often than not, Goblin Slayer finds ingenious ways of using common tools and items from the RPG and weaponizing them.

There is so much there I like, unfortunately, it gets dragged down by the shows need for titillation and overly edgy depiction of its main character. Honestly though, if this had been a more generic dark fantasy themed anime, I probably would have stopped watching it after two or three episodes.

Despite all of this, there is an obvious character arc to the Goblin Slayer. Spending so much time alone in his revenge quest made him into the ultra-competent bad ass that he is. But the more time he spends with the adventuring party he has found himself in, the more he seems to be opening up and humanising as a character.

I like the supporting cast, I like the situations and the world the show takes place in. And I hope that the series continues to grow and invest time in making the main character into more than just a hyper lethal vector.

Maybe it’s just my naivety showing, but the show bounces from getting its hooks in me one minute to trying to drive me away the next. Had the show toned down the excessive fan service and abuse of women that feels like it’s being used as fan service, then I’d be really enjoying it…

I intend to keep watching for now, but if I see one more woman offhandedly raped then I might be done, despite the goodwill it’s otherwise building with me.