Who likes worldbuilding? Because there’s a lot of that going on in this newest chapter of Dragon Ball Super. One thing I have noticed about Super is that while it seems super resistant to changing the status quo on Earth and with any of the characters who live there, it is very happy to chop and change the state of the wider universe.

Like last time, we spend most of our time in this chapter with the newly introduced character of Granolah, only cutting away from him momentarily to show Goku and Vegeta’s progress whilst training on Beerus’s planet.

It appears that Granolah is the last surviving member of his race. Because while he arrives back on his homeworld to see it bustling and thriving with life, none of them look like Granolah. They’re the Sugarians, an alien race who look like they have a common ancestor in the Yardratian Mark IIs. Not that the manga ever says that, it’s just that I’m starting to see a trend with a lot of the super simple designs going into these new alien race’s we’re being introduced to.

And these guys are the sweetest bunch of little gumdrops, as their name would imply. Showing nothing but compassion and kindness to Granolah as he passes through town. Back in the day, we spent so much time hearing about the Freeza Empire and how they devastated planets, only to sell them on to other races. This is the first time we’ve seen the outcomes Freeza’s affairs.

Also how the Heeters we met in the previous chapter seem to act as the intermediaries. Fixing the planet up after Freeza’s army are done with it and selling it on to other races who need a planet. Like the Sugarians for example. It’s something we always kind of knew about, but this if the first time we’re seeing it in practice.

Granolah hangs around on the mountain, outside of the cities so he can see the ruins of his Castlevania looking hometown. So he can keep the hate fresh in his mind. Once again, while he simply talks about Freeza, we see the memories of Saiyan Great Apes doing the majority of the destruction.

In what is a very nice transitional cut, we have Beerus asking Vegeta how many planets he has destroyed. As Vegeta answers, I get the impression he is standing before a crossroads. He’s spent the longest time coming to terms with his own past and accepting the sins of what he did as a younger man, only now we have Beerus introducing Vegeta to the power of the God of Destruction. Something which seems like it might have to contradict this path of redemption Vegeta has been walking down. 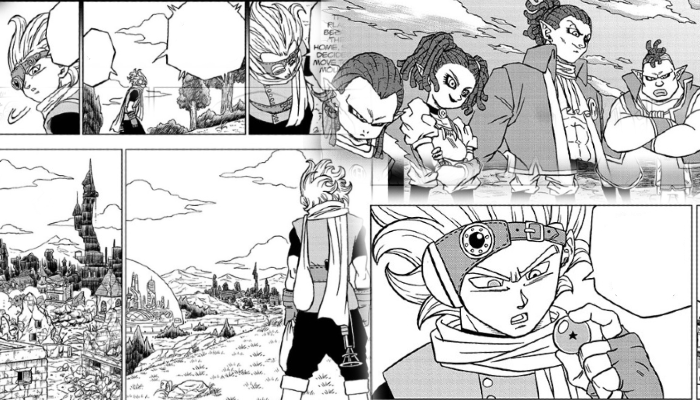 Apparently, it’s Vegeta’s guilt at what the Saiyans have done that is holding him back from attaining greater powers. Something, ironically, a younger Vegeta would not have been struggling with. As which point Beerus finally goes and reveals to Vegeta that he was the one who suggested Freeza destroy the Saiyans. Something people have been wondering about for a long time at this point since the fact was revealed in the early days of Super.

Vegeta reacts as you might expect. The only question remaining is that how much stronger he and Goku have become since their last tackled with Beerus and how they measure up to him. Well, as fight seems to double up as a status quo re-establishing measuring bar. Because despite his rage, Beerus effortlessly plants Vegeta’s head into the ground over and over. Ending the fight by Hakai-ing a small piece of Vegeta’s armour and launching him into the distance.

After Goku attained Ultra Instinct, the fandom all thought that he and Vegeta had started to catch up to Beerus. This chapter serves to laugh at us and tell us to calm down. Beerus is still far beyond the Saiyans it seems, despite the power scaling established in the Tournament of Power between Jiren, Ultra Instinct and the other Gods of Destruction. But, getting upset about power scaling in Dragon Ball is a fruitless pursuit anyway. Facts of strength only extent as far as the most recent example. And as of right now, Beerus is still top dog. (Besides the Angels.)

Whis making a comment that hints that Beerus might have a greater mastery of Destruction energy than even the other God’s of Destruction.

It appears that Vegeta, in order to really master the destruction energy that Beerus wields, he must destroy himself first. Something the Prince has doubtless done time and time again throughout his trial filled life. Only this time, he needs to remove all the doubt, guilt and uncertainly about his own past and the past of his people. Something that, as I already said, is to the contrary to the path of penance he has been walking throughout Super.

With that out of the way, we get a huge dump of lore and information about he wider galaxy again. The Heeters, looking through Seven-Three’s memories find something much more interesting than the location of the information broker Zuno. They discover the existence of the Dragon Balls. Adding to the strange history of the Namekians that there was once a tribe of them living on Planet Cereal.

What a coincidence. Like the Cerealians, the Namekians living on planet Cereal were wiped out, all except one. An elder called Monaito who just so happens to be Granolah’s roommate. Through their discussion we learn that Planet Cereal has it’s own set of Dragon Balls… Well, I say a set. There’s two of them, and they look small. Smaller even than the Dragon Balls of Earth. So with those we’re up to four sets now.

During a little cutaway to dump some more lore into us to justify another set of Dragon Balls on a previously unknown planet we learn a little more about the ball’s original purpose. The most interesting factoid that comes from this scene is that the Namekians themselves apparently aren’t native to Universe 7. However, the elder says that they came from another “Realm” not from another Universe. It’s an interesting choice of words and adds an element of mysteriousness back into the slug people.

Now we’re all caught up, Granolah seems determined to find the other Dragon Ball and make a wish to bring back his people, or to take revenge on Freeza. But Monaito shuts him down, saying it wouldn’t be fair to the Sugarians if that were to happen and that the Dragon Balls were never meant to be used for such reasons of revenge. I get that Namekians are a peaceful people, but his guy is really not helping the obvious turmoil Granolah is going through.

And with that it seems like the matter is closed. That is until through pure dumb luck, Granolah catches a new report on the television stating the discovery of the other Dragon Ball that very day. Those pure Sugarians, they stand no chance against Granolah as he sneaks into the lab and easily takes the second Dragon Ball for himself. Dressing up as a rogue and stealing the ball from the lab studying it as an extra-terrestrial artifact.

Once out of the way, Granolah summons this new Dragon. Like the balls themselves, this dragon appears much smaller than Shenron. Along with a somewhat amphibian design. Which leads me to believe that this dragon is probably the weakest of the Dragons we’ve encountered so far, the size thing, not the water aesthetic. It makes me wonder how this dragon will go about granting Granolah’s wish to become “The Strongest Warrior in the Galaxy!” 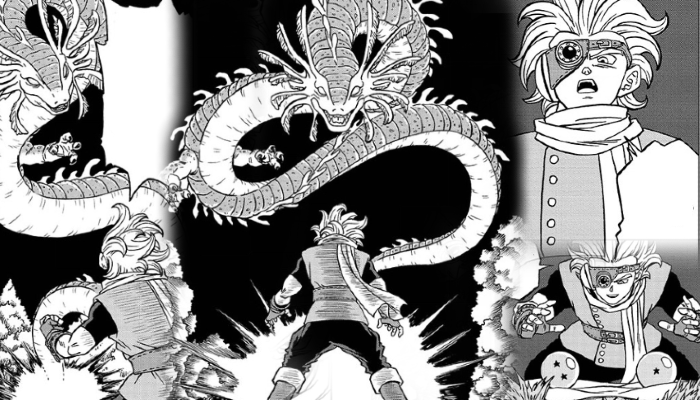 I can’t imagine it’s a wish any dragon could simply grant, except maybe Super Shenron, although it’s not a wish we’ve ever seen anyone make before. I get the impression that this dragon won’t simply make Granolah the strongest being right away. Rather I think he’ll give him the means to become stronger, thus kicking off his crusade of revenge and eventually causing him to clash with Freeza, the Saiyans or both. Giving him a skill or ability that allows him to become stronger in a short amount of time.

I mean, Freeza did it without any magic in short order. So Why not.

I enjoyed this chapter for all the new lore and context given to the already established aspects of the Dragon Ball story. I am also excited to see the future of Vegeta’s growth, although at this point I’m not going to get my hopes up. Vegeta’s big power boosts almost always happen off screen, and after the crap they pulled with his Yardatian training, I’m not going to fall for that same thing twice. I’m also excited to see how Granolah changes as a misguided villain, if that is indeed where this story is going.

He is so angry and pent up from stewing over the fate of his people that I can easily see him coming to blow with both the Saiyans and Freeza before the arc is over. It just wonder what kind of threat he could end up being that could be even worse than Moro?