I’ve been trying to catch up on older games from earlier in the year, all in an ineffectual attempt to round out my upcoming best of year that has become an annual tradition/burden on this blog. The problem is that almost all of the games worth talking about are coming out in a final couple of months of the year, barely giving me enough time to look at them.

Not helped by the fact that some of that time has been spent going back and playing games I’ve missed from earlier in the year that’ll probably end up not on the list anyway. Like Doom Eternal for example.

I LOVED 2016’s Doom. It was a game that hit me very hard when it came out and would have easily been my game of the year had Overwatch not also came out in 2016. It was a perfect blend of heavy metal, fast-paced action and over the top violence to get my adrenaline pumping and my eyes bulging out of my head the whole time I was playing it. But those were merely ingredients to make the game good, not great.

What elevated this reimagined Doom to even greater heights in my eyes was the intentional absurdity of it all. While it was a hyper-violent, hyper-metal video game, it was also cheekily irreverent about everything that was going on throughout. Including its own story, coupled with the Doom Guy’s total disdain for having to associate with any of it. 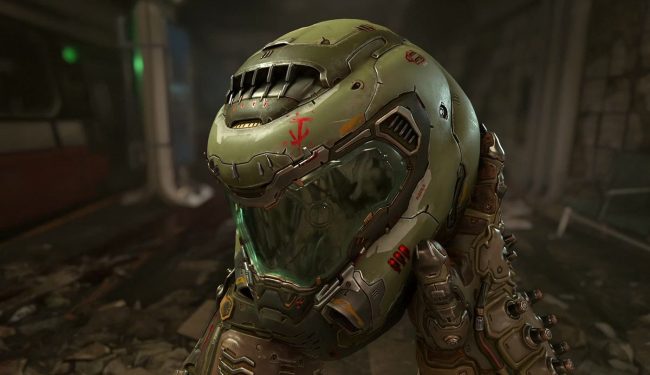 While just about as silent as a silent protagonist could get, the player character in the first Doom still had a ton of personality. All from his body language and how he responded to tasks he was forced to undertake that didn’t involve murdering demons. I mean, the game opens with him waking up out of a stone sarcophagus with no explanation, seeing a display reading “Demonic invasion in progress” and merely chocking his shotgun in response.

It’s great. And the developers knew this. Because there is a traditional style campaign going on around the Doom Guy, with characters contacting him and trying to get him to perform tasks, and more often than not, the Doom Guy’s response is to throw monitors aside, punch equipment in his way and basically destroy anything that contributes to ripping apart as many demons as he possibly can.

Just so you know where I stand when it comes to the first game, because coming into the sequel I was always going to be worried that Doom: Eternal would do what many sequels do and double down on everything that came in the first game. My concern being that it would double down on the story and lore aspects of the series when in actuality, that was probably the last thing I really wanted from it.

As you might have inferred from the title, that’s exactly what Doom: Eternal ends up doing.

Eternal adds a ton more lore and backstory to a game that really doesn’t need it. It’s still filled with the same, over the top visuals of the first game, like giant pentagrams etched on Earth’s surface and Doom Guy’s giant floating castle in space, but it goes out its way to explain all of it. And I really just didn’t care.

We learn of the Night Sentinels, how the Doom Guy was discovered by them and turned into a superpowered soldier for this version of “heaven” and how he eventually betrays them after we learn that “Heaven” and Hell have made a pact to allow the demons to invade different dimensional plains in order to create the Ardent energy both realms are using as a power source. Literally, both of these games are about an energy crisis.

My issue is, with all these revelations and explanations for how the Doom Guy got wrapped up into it, the game is inherently taking itself a little too seriously for my liking now. I don’t especially care for the interdimensional politics and trade deals going on between these realms, they’re the kind of thing the Doom Guy would have cut off mid-spiel in the previous game, but now it feels like I’m forced to sit through it all.

It doubles down on wrong aspects of the first game in my opinion. I even think the Doom Guy’s personality gets lost in the mix somehow. While the first game had him impatiently pushing past the story, here we get far less of that personality through body language. Rather than him being this single-minded demon murdered, he seems more passive in the story that utterly revolves around him, while also making him seem juvenile as a character based on his quarters in the castle.

His room is filled with guitars, blood-soaked weapons and comic books. I don’t remember seeing one, but I wouldn’t be shocked if there was a skateboard in there somewhere too. It’s there purely as an Easter egg, but it adds this air of “badass 90s guy” to the character I really didn’t need. By adding so much to this character, they paradoxically take away from him.

When he was this mysterious, single-minded force of nature who wanted nothing to do with the nonsense going on around him, he was far more compelling to me. Now I know how he got from the end of Doom 64 to the sarcophagus at the beginning of Doom 2006, I’m suddenly less enamoured with him.

So yeah. Most of my issues with the sequel come from a place of tone and storytelling, although I will touch upon the gameplay as well, if only briefly. The thing is, as my enthusiasm for the story waned, it also affected my enthusiasm for playing the game at all. So it’s difficult for me to be super impartial about this. Had I loved the story, I may have been far more willing to interact with the added complexity of the combat puzzle that is Doom’s gameplay.

Gameplay, like the previous Doom, is as much a puzzle as it is pure mayhem. Eternal adds several more layers of complexity to the combat, that ended up being one step too far for me. Again though, I feel like my impatience with the game is more to blame for this than the quality of the gameplay itself. 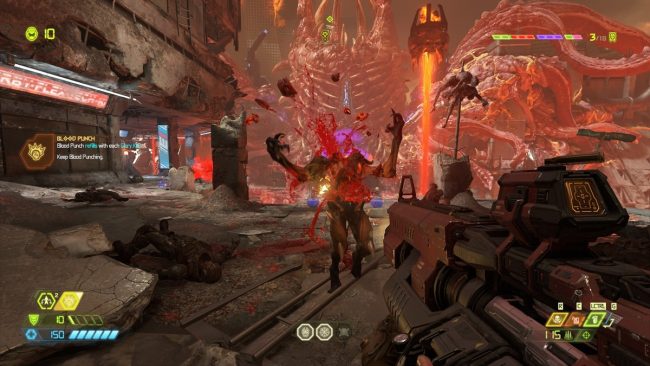 The major two additions are that of a flamethrower, which causes enemies you damage to drop armour and enemies themselves having weak points, which require them to be attacked by a particular weapon in a particular way, or else you’re going to come out of the encounter much worse for ware. All combined with all of your weapons having far less ammo than they did in the first game, it feels like you’re constantly running out of the ammo you need and managing cooldowns on your various abilities more than ripping and tearing your way through the hoards.

Plus, this might be just me. But the addition of the wrist blade makes those glory kills so much less satisfying than the Doom Guy doing it all with his bare hands.

I think this is one of those cases where I saw something I didn’t like right from the start of the game, and any other minor issue just compiled with that and created this self-fashioned mount of ill-will towards the game. Doom Eternal isn’t a bad game, but the choices it made only goes against the good will the previous game build up in my mind.

It doubled down on the wrong aspects of the game for me, while losing some of the cheeky tone and irreverence to its own lore that made the first game so great. And in the end, I feel like that’s Doom: Eternal’s greatest sin. Had it still been packed with all this lore, and all this backstory, but still showed an utter distain for its own storytelling, then I most likely would have been 1000% on board for it.

Ultimately, by losing the most unique aspect of itself, it falls below the water of the ridiculously saturated first person shooter games we get year to year.