Of all the anime I’ve been watching this season, there’s only one that has really intrigued me. Which is rather fitting considering that intrigue is the name of the game when it comes to Moriarty the Patriot. Despite enjoying watching the first five episodes, it still felt like there was something missing. Moriarty had quickly been painted as this near omnipotent mastermind, but there’s only so long he can be on top before things become stale.

Obviously, if you know anything about any kind of classic literature then you’d know I’m talking about the appearance of Sherlock Holmes in episodes seven and eight. And it was an introduction that felt far more exciting than I’d even expected it to be.

The “rival” is a time-worn tradition in anime. From the likes of Prince Vegeta to Sasuke Uchiha to Bakugo, almost all protagonists have someone there to push them forward, keep them on their toes or simply to keep their lives interesting. While they all serve different purposes in their individual stories, they’re forever present, either nipping at the heels of the hero, or sometimes one step ahead of them, giving them a perpetually moving goal to continue to strive for.

While the original dynamic between Sherlock Holmes was more of adversaries, there was a hint of shared respect between the men in how they dealt with each other and Moriarty, at least, stated how witnessing Holmes grapple with his case as an “intellectual treat”. Ever since then, in the many reinterpretations of the Sherlock Holmes story Moriarty has always been painted as Holmes greatest adversary. His rival.

But at what point does a rival simply not become a villain? While a lot of rival characters in anime toe the line back and forth between being villains and mere rivals for the hero. I think the main factor in calling someone a rival comes from there being a mutual respect and/or enjoyment from the combative relationship between the characters.

Characters of the likes of Bakugo from My Hero Academia and Vegeta from Dragon Ball Z are there to push the main character, to test their mettle and give them an ally in their never ending mission to become stronger. Although, the power dynamic between Deku and Bakugo and Goku and Vegeta are totally reversed in their respective stories.

There is clearly a stronger one and a weaker one, and that power dynamic plays a major role in their rivalry and how their characters continue to develop. Playing second fiddle to someone else hits very different for Deku than it does Vegeta, but is also an incredibly import aspect of their characters and their development.

The power dynamic between Moriarty and Holmes, has yet to really establish a superior. And some rivalries work that way, two characters being pitted against one another without one ever really getting a clear upper hand. They’re on even playing ground right now, and the outcome of this particular relationship will most likely end in the death or pertinent incarceration of the other, insensibly putting an end to their rivalry.

While Moriarty certainly has a grand scheme in mind for the future of Britain in mind, as explained in the episodes that kicked the series off, his relationship with Holmes is bound to take centre stage of the entire series going forward, usurping the grand plan and making it a secondary focus. It has to, because up until now, there’s been nobody there to challenge the Professor. To come close to contending with him.

The way the series has played out so far, Moriarty has been encountering reprehensible people, members of the nobility that are poisoning the very country by their utter disdain for everyone around them. And then we watch Moriarty take them apart, ruin them or outright orchestrate their death, all without getting his own hands dirty at all.

It’s a grizzly kind of fun to see it unfold, getting an idea for what’s happening but then never witnessing that final piece of the puzzle until it’s about to happen. Too late for anyone to doing anything to stop it. It’s entertaining, not to mention cathartic to watch. Especially given the political climate in the world this past few years. But while it’s entertaining to see these traps unfold themselves and ensnare their targets before our eyes, that can only happen so many times before Moriarty’s sinister smiles of satisfaction aren’t enough any more. Although, it still hadn’t become tedious to me by episode 7. And yet, while that plan was in motion, we take an aside to introduce a swaggering, self assured man with a ponytail, a figure we all immediately recognise. Despite myself, I found myself immediately very excited. Before now, nobody has come close to uncovering the truth behind any of Moriarty’s plots, he’s simply stood by wearing a sinister smile, only ever revealing himself to those who he knows are mere moments from being no threat to him.

It’s during the very dramatic reveal at the end of episode 8 where Baron Enders is lifted onto a stage, stabbing a man and proceeding to lose his mind in the process. All a very literal metaphor for how Moriarty orchestrated the events in a showman-like manner for the audience. It’s another perfect plan from him, representing the strange and twisted world he is trying to bring down by twisting the camerawork and strangely recolouring the scene. Yet, when the final action is about to take place, and Enders is about to launch himself into the crowd like a madman, we’re snapped back to reality.

Another man from the crowd pounces into action and disarms Enders before he can do anymore damage. That man obviously going to be Sherlock Holmes. The moment he does insert himself into the situation, the warped reality we’re briefly existing in, and which we always enter when one of Moriaty’s plans is reaching its climax, is snapped back into reality. Because that’s what Sherlock Holmes does, he reveals the truth… and then he proceeds to investigate the dead body and point out it’s been dead for several hours already.

While Holmes doesn’t do anything to change the final outcome of the scheme, his very presence adds a destabilising element that throws us out of the reality the show has been establishing the first handful of episodes. After the cruise is over, Holmes and Moriarty have an exchange, Holmes seemingly sensing the innate intelligence of the other man and desperate to gush of his excitement of the game being afoot.

At this point, Holmes reveals himself to his future rival. Something that puts a small smile on Moriaty’s face. It’s this smile that leads me to see what kind of rivalry these two men might end up having. As I said earlier in the post, there are all kinds of different rivalries in anime. Some of which are about pushing one another to get stronger. This relationship though, this comes from a place of entertainment.

I get the impression that Moriaty has gone through life unchallenged by anyone. Anything he puts his mind to always works out in his favour, exactly as he had planned. Here, it’s possible that he sees a man who could contend with him on his own level, give him something he’s never had to experience before: a challenge. And with that comes entertainment that it’s possible he’s been sorely lacking. The fact that he always feels the need to smile at his victims before they die, letting them know he was behind it all shows there is some amount of ego in there driving him. Because their survival would but a big hole in his “perfect plan”. 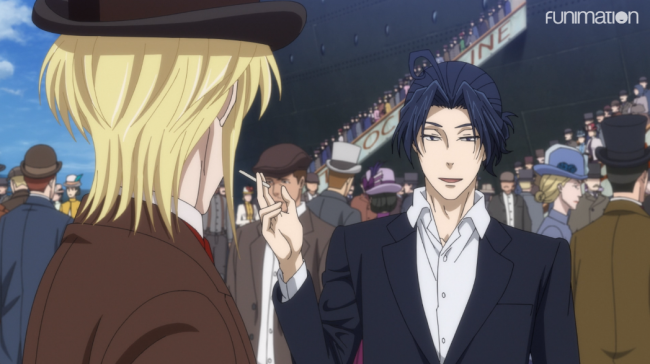 I may be totally off the mark with this one. But I could see a possible future where Moriarty’s desire to challenge himself against this fascinating individual ends up becoming this all-consuming compulsion to him, driving him to almost begin self-sabotaging himself in order to have Holmes be a factor in his plans. Forcing him to think on his feet and prove his own wit against his rival.

I always knew Holmes was going to factor into this series sooner or later, but I’m surprised at how excited I was to see him turn up and make the impact he did. Rivalry is one of the time tested tropes of anime, and seeing what might be one of the greatest rivalries in literature being represented in anime form was something I never realised I wanted until it was thrown in my face, in all its swaggering glory.