I’m doing episode reviews again. This was the series I decided to do it with, fingers crossed it’s the right choice. After the tease that ended the third episode of Jujutsu Kaisen, episode four wastes no time in jumping right into the middle of a new challenge for our first year students. Starting with our main trio; Itadori, Fushiguro and Kugisaki outside of a juvenile correctional facility in which a “Curse Womb” has suddenly appeared. And this time it really is down to them as Bowie-Sensei is nowhere to be seen.

As this episode begins, clueless Itadori and thus the clueless audience gets a handy dandy breakdown of the curse grading system and how powerful each monster within each grade is. The basis of comparison being helpfully made by using conventional weaponry as a measuring bar. Honestly, I get that they’re understaffed, but Itadori still hasn’t had one “lesson” in his new school to at least bring him up to speed.

Anyway, the curses: grades 4 and 3 are described as being easily defeated with the strength of a baseball bat and a handgun respectively. Grade 2 is a little jump up in that a shotgun would be able to do it in a pinch, although not without some challenge. And then we get a massive jump to Grade 1 in which apparently a tank might not provide enough firepower to get the job done. It seems like there’s quite the gap between Grade 2 and 1 right there in my eyes.

Oh, but we’re not done. The womb inside the prison could “hatch” at any moment, and if it were to do that there’s a high likelihood that it’s become a special grade. Something our trio have no hope of facing. The power described to take down a special grade would need the equivalent of successive airstrikes to even slow it down in any way.

So our first year’s mission is this: figure out what’s going on in the prison and either rescue or confirm the deaths of the five unaccounted for people who failed to get out during the evacuation. If they managed to encounter the hatched special grade during that time, their options are to either run away, or die. Which doesn’t seem like a choice to me, but Itadori has made it abundantly obvious that he perceives “a good death” as a option. With the exposition dump over, we get a reminder of what Itadori is all about. He spots a mother whose son is still missing and feels an incredible empathy for her.

To jump ahead a little: when they do find the body of this guy, Itadori is adamant he bring the mangled corpse outside with him to give the mother some closure, even if it means endangering himself and his group. It’s something Fushiguro and him butt heads over. As the more experienced sorcerer points out that the kid he’s trying to save was a pretty horrible person anyway, hence why he was in a juvenile prison.

Going on to say; going out of his way to save someone might just give them the opportunity to go and do something worse later on. It’s kind of a poor counterargument to Itadori’s saviour mentality, but at least it’s something to keep their relationship interesting. Either way, the womb has hatched and it is indeed a special grade curse. Which shows up and jumps us right into an action sequence.

It’s genuinely unsettling when this thing shows up out of nowhere. How suddenly and how close it is to Itadori and Fushiguro mid-argument. And right away, when Itagori tries to attack it he loses not only his weapon but his entire hand. So yeah, these three are totally out of their league here. Itadori can’t even rely on the Two-faced spirit Sukuna inside him to help, as the creature tells his host he’ll go out of his way to kill his friends before he even lays a finger on the special grade.

At which point Itagori decides to go full heroic sacrifice mode and hold the curse off while Fushiguro goes and rescues a recently captured Kugisaki and gets the hell out of there.

Despite how strong we’ve seen Itagori be in earlier action sequences, he is embarrassingly outmatched in this encounter with the cackling special grade. One that obviously seems to enjoy playing with its food, which is the only reason the battered and bruised Itagori is still alive. In another impressive action sequence, we see Itadori on the brink of death within only a few hits. To which he has a little bit of a breakdown, realising all his promises to his grandfather have amounted to nothing. And that a pointless and unfulfilling death is what most people in this business end up getting.

At the very last minute, he gets the sign that Fushiguro has managed to escape and finally just releases the beast. Although as soon as Sukuna does emerge, as promised he has no interest in battling this monster. Rather, he starts thinking of the best way to make his host suffer. Which boils down to killing his friends again.

Luckily/unluckily for everyone, the curse seems to lack the sense to team up with Sukuna and tries to attack him. It goes very poorly for the creature. And in a brutal, flashy and cool as hell sequence we see Sukuna shred the monster to bits and retrieve another of his fingers from within it. 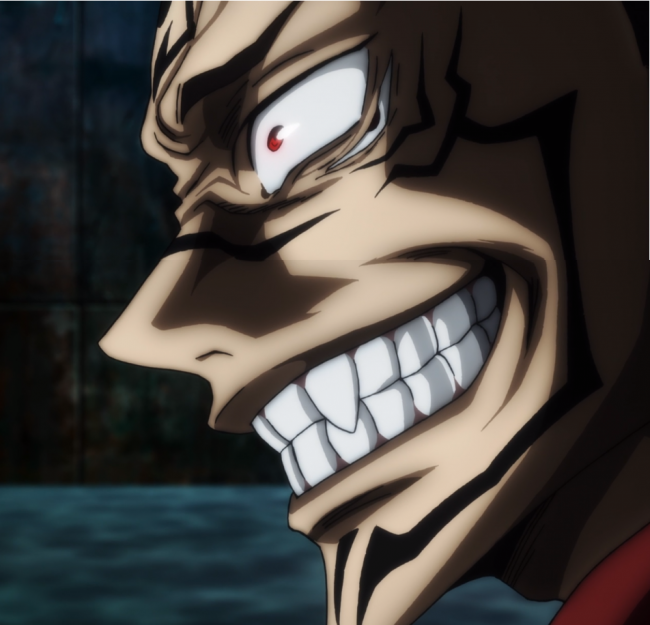 Almost as if predicting the audience reaction. Sukuna calls out to Itadori to take his body back. The answer to which is silence. This is bad. Itagori has either lost the strength to take his body back due to the overwhelming beating he just took, or the mental fortitude based on the self-realisation that he isn’t the toughest guy around. So rather than save the day, things have gone from bad to worse.

Because while the Special Curse was powerful, it was mindless and confined to it’s Nightmare on Elm Street looking demon dimension. Saukuna, on the other hand, is much more powerful and has his eyes squarely focused on Fushiguro and Kugisaki. Which I’m sure we’ll get into next episode.

This was the 4th episode and it had the feeling of a season finale in terms of action and dramatic weight. I’m glad to see the anime is pulling no punches and putting our heroes into endgame seeming levels of danger right from the start. While there’s something to be said about the slow build of an underdog like (oh, just pulling a random other anime off the top of my head) Naruto did, I’m also appreciative of shows that just jump right into the good stuff and give us the good shit right from the start.

Plus, this show is so visually impressive that the bigger the stakes and the flashier the fights the better. It’s still early enough in the series that I’m getting a feel for it though and wonder if there will be a “normal” after this little arc is over. Or if literally every storyline is going to be this last ditch and desperate.