I almost thought about just not including this series in the Spring season’s 3 Episode Rule archive. Because right after finishing the third episode I learned that, thanks to the COVID-19, Digimon Adventure is going to be taking an indefinite break, no doubt a result of the animation and production team being unable to physically do they jobs to get this series out.

But we’ve got three episodes out and  soI don’t see any reason not to talk about them, even if the 4th episode might not see the light of day until we hit the Summer season three months from now…

Like most people my age, when I think of Digimon I can’t help but think of those original 54 episodes of Digimon Adventure from the end of 1999 and very early 2000s. There were a ton of different series that came after, but most people think of these characters and this story when they hear the word Digimon. So it should come as no surprise this is a well that Toei would keep returning to. 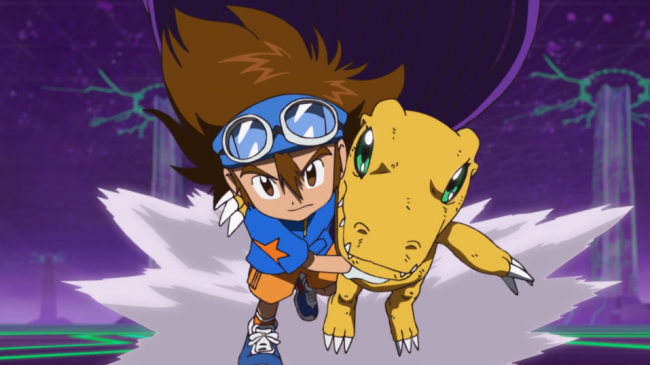 What with the Digimon Adventure tri. movie series from the past few years and this reboot/reimagining of the original series, some could argue that it’s lazy that the licence holder keeps going back to the same old well. But let’s be real, the main reason shows like Dragon Ball and the anime adaptation of Pokemon have lasted so long is because they follow these same, recognisable characters that we remember from our childhoods.

Onto this series though; Digimon Adventure 2020 is a retelling of the original Digimon anime series, updated and set in a more modern world. While the design aesthetic of Digimon is and always will be a very 1990s approach to technology and the internet, this new series does a great job of emulating the character design and visual approach to the original series and combining it with a much more polished modern look as well as the new style visuals we’ve being seeing in many of the modern video game takes on the franchise.

2020 isn’t a beat for beat reimagining of the original series though, because throughout these first three episodes, we only end the third with Tai waking up in the digital world. The first three, weirdly enough, serve as both an introduction into the world of the series and its characters, but is also a loose retelling of the second Digimon movie: Our War Game!

I didn’t learn until a few years ago that the American Digimon movie was actually the first three Digimon movies out of Japan mashed together into a single, incomprehensible mess. The second part of which (A.k.a. The part with Omnimon and Dioboromon (A.k.a. the best segment of the movie)) is taken out of the context of that movie and repurposed into an introduction to this series.

Thus we’re introduced to Tai, Izzy and Matt (I’m sorry, I’m never going to be able to get Saban’s english dub names out of my head when it comes to these characters) who meet one another for the first time, learn of the existence of Digimon and come together to allow Omnimon to defeat Argomon and prevent an American nuclear missile from landing on Tokyo. Pretty much the exact plot to Our War Game!

Only this time, the animation looks all the more impressive thanks to advanced animation techniques and, no doubt, an increased budged from what the original series got 20 years ago. (20 years? Christ…) Even had I not had the nostalgic ties to that original series from the early 2000s and my very first memories of watching anime before I even knew what anime was, I’d be well up for watching more of this. It’s obvious some care has gone into making this series look as close to the original as possible while also doing a lot of work to pretty it up, especially during the action sequences.

Verdict: I’m ready to continue whenever the series eventually comes back

I like to make a big show about not being an especially nostalgic person, but my reasons for enjoying this series and wanting to see it continue are most definitely rooted in my watching this series as a child. I might not have the strong nostalgic drive for Digimon that I do Pokemon or Dragon Ball, but I enjoy these characters and their story enough that I want to see what a reimagined vision of this series for 2020 looks like.

Whenever that may be is all up in the air. With production put on hold indefinitely, I don’t know when we’re going to see this series continue. It might be in a few weeks, it might not be until we’re into the Summer season in three months time. It’s a shame, but nostalgia aside, this seemed like a cool and promising show, but hey, at least the three episodes we got work as a reboot to that one movie and nicely tied things up as a prequel to the original series as things stand right now.