Whenever I think back to 2015’s Ori and the Blind Forest, I remember this difficult, beautiful and amazing video game. Actually going back and re-reading my entry on the game during my game of the year ranking that December; I wasn’t actually quite as in love with the game as my fond memories would seem to suggest.

Having now played the sequel, it kind of makes more sense in hindsight. These game’s greatest strengths always lay in their tone and presentation. Telling a hauntingly, beautifully presented story dealing with themes of loss and renewal. It was a game pulled along by its music, its art and its style, so much so that pretty much everything else about the game becomes a secondary memory.

Like it’s predecessor, Ori and the Will of the Wisps is a game of the Metroidvania school of video game design, a genre even more well trodden since it was back when the first game came out in 2015. The sequel does work to build upon the content of the first game, which was a pretty straight laced example of the genre. Doing so by adding more elements of games like Hollow Knight and other games that have come out since into the mix. 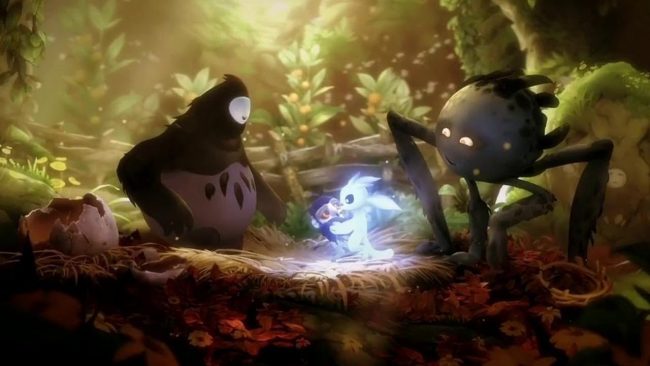 Now there are NPCs, side quests, a home hub that can be built up over time as the player gathers collectables. The feeling of solitude and being this tiny being of light amidst a big, dark backdrop is much less impactful than is was before, especially when you’ve got a giant frog friend to talk to.

The beginning of this game’s story starts almost identically to that of the first one. It’s hauntingly beautiful and relentlessly sad. The characters of the first game are living peacefully with the child of the owl Kuro from the first game. The young Owl called Ku is born with a damaged wing, and it’s only with Ori’s help that she is able to fly again as the pair seem to share a sibling-like bond.

However, after getting caught in a storm, the pair are separated and fall into the new world Niwen. Much of the game from here deals with Ori and Ku’s efforts to be reunited, and the number of needless tragedies that befall them before the end. Again, it’s the art, the music and presentation of this world and its story that acts as the best aspects of this game, being able to punch you right in the emotional guts over and over again.

The biggest change from the first game for me is it’s approach to gameplay.

One of the things people tend to forget about the first Ori was that it was a punishingly difficult game. This came from the fact that, coupled with the very challenging platforming and hard hitting enemies, the “soul link” mechanic made the very act of creating a save point a choice the player needed to weigh their options with.

Because resources were scarce, players had to constantly wrestle with choosing between how to spend their energy. Because if you created a respawn point, you’d come back with whatever health you had at the time, as low as it may have been. The main challenge of the game came from traversal, as the simple act of getting from point A to B could be a harrowing experience. Having to layer these mechanics together as the player was given more and more methods of getting around.

By comparison, Will of the Wisps is a stroll in the park. Gone is the pain of being sent back to your previous soul link, as the consequence of death has all but gone from the game. Respawning you no more than a few moments before wherever you last died. On top of this, resources seem much more plentiful in this game, coupled with a newly introduced perk system, you can restore your own health and energy as you fight through the game.

Was an increased focus on combat wise?

Because fighting seems like much more of a focus in this game than it was in the first. Sadly, it’s the part of the game I was the least interested in personally. Ori gains a number of active skills throughout the game, three of which can be assigned to the face buttons of the controller on the fly. This means that players can settle on a loadout they like, or switch things up on the fly to exploit the weaknesses of certain enemies.

In the early game, the combat seems as challenging as the traversal was in the first game. You only have access to a sword-like attack, and enemies can punish you hard if you just try to button bash your way through them. But by the game’s halfway point, that’s what I ended up doing anyway. As I had enough health and death was so little of a consequence that I ended up interacting very little with the combat systems, even as I unlocked more powers.

There simply wasn’t a need to do so. 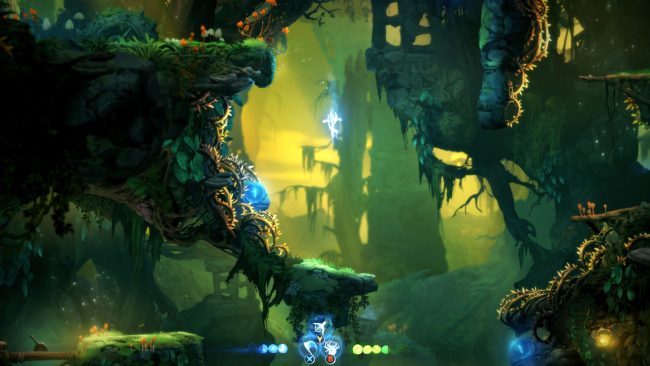 The game is still strongest when it comes to traversal. Bouncing, diving, bashing and leaping through the beautiful, wide open world can feel satisfying and exhilarating, but again, messing up doesn’t carry the consequences of the first game. Where as falling down in the first game meant you had to run a gauntlet again, in this game, you simply lose out on a few seconds. while the game is a slow starter, by the time you’re three hours in, it’s become trivialised to the point it feels like you’re just already mopping up collectables before you’ve seen half the game.

Something I’d heard from reviewers before I got this game myself was that the game was dogged by performance issues, no matter the platform. Playing the game on an Xbox One X myself, I didn’t encounter that many issues. The game would stick every now and then when it was obviously loading to catch up with an area transition. Not ideal for consoles this late in the cycle, but it’s become so common that you end up expecting it.

It wasn’t until I got to the sandy area of the game that I started to encounter some egregious problems. The game taking upwards of five minutes to load, a full 2 minute wait between fast travel points. Constant freezing and the camera becoming locked in place while Ori would continue on, off screen. Most often just dying to some unseen enemy or obstacle. 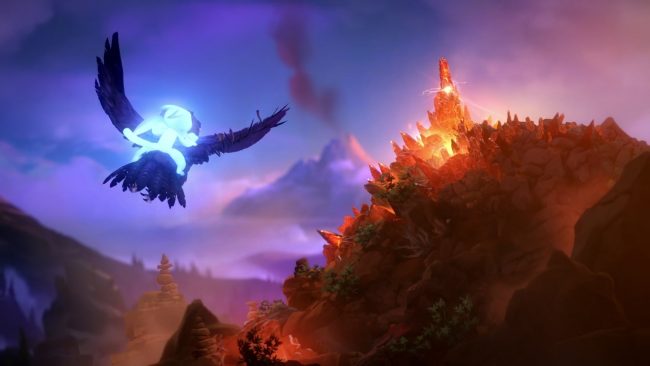 It only happened the once. But this is not something that should be happening ever, especially in as high a profile game as this in terms of Microsoft’s first party titles. I came very close to dropping the game all together there and then. And I might have had the issues not just vanished by the next time I loaded the game up.

Ori and the Will of the Wisps is a beautifully realised game in terms of its haunting music, it’s hand painted style art and its story of death, and rebirth. As jaded by the game as I was by the end, the story’s actual ending was a real emotional moment that you can’t help but feel affected by thanks yo the game’s masterful presentation. There are a ton of amazing moments throughout.

As a video game though, it pales in comparison to the first game in terms of standing out above the crowd. The game feels pedestrian by when putting the two against one other. I’m not saying that the game needed to be as difficult as the first one to be a good game, but with so, so many other Metroidvania games out there right now, Will of the Wisps took away one of the things that allowed it to define itself and stand above the crowd.

Playing the game, moment to moment, ended up allowing my mind to wander, the point I wasn’t paying attention to the game half the time, meaning I was paying less attention to just how damn good the game looked. A far removed situation to the first game where every move you made felt like a decision point.

This second Ori game is good. The presentation does make up for the hum drum gameplay experience, but ultimately its not enough and this game feels like one that I’m going to forget in favour of the first one. As much as aspects of the first game underwhelmed me, it feels like a much more ambitious thing than this one, which just ends up feeling like more of the same, but more in some regards, and a lot less in others.

One thought on “Ori and the Will of the Wisps – Just as sad, but way more forgiving”