I keep acting like I’m still some newbie to watching anime outside of the major shonen series out there. But at this point, I’ve been watching quite a broad array of different anime for a couple of years now. I’ve spent three seasons making a conscious effort to expand what I’m watching and try new things. Hence my “3 episode rule” series.

Yet, after this time there are still genres and series that surprise me that I can get into. Last fall I started watching Ahiru No Sora; a sport anime about a really short kid wanting to become a great basketball player. Never did I expect to become so invested in a series about a sport I actually kind of hate in real life.

It’s the thing I’ve heard anime bloggers and Youtubers say more than once; how a good anime can inspire you and make you want to do or experience things you’d otherwise never dream of trying. How a series focusing on passionate people working and loving something is enough to make them was to emulate it.

Ahiru No Sora is my first real experience of that, at least when it comes to sport. The show does such a great job of breaking down the rules of basketball, slowing down the action and taking the time to explain exactly why individual passages of play are so impressive that it’s putting me under the delusion that I might actually want to start watching basketball in real life.

I know for a fact that this is a fool’s errand, mainly because I’ve tried watching Basketball before and it bores the hell out of me. When there are around a hundred baskets scored in a game, it kind of becomes difficult to get excited about players scoring. It’s at that point you really need to start appreciating the individual moments of skill and teamwork, something I wouldn’t be able to spot until I’d spent hundreds of hours watching the sport before I could start to pick it out.

And in the end, it’s not the basketball that excites me about Ahiro No Sora, it’s the characters, their passions and their shortcomings. Be it either the physical limitations they must endeavour to overcome, or their social and emotional problems that are keeping them from being a real member of the team. Because, no matter how much this show likes to show off the skill of individuals involved, basketball is still a team game. 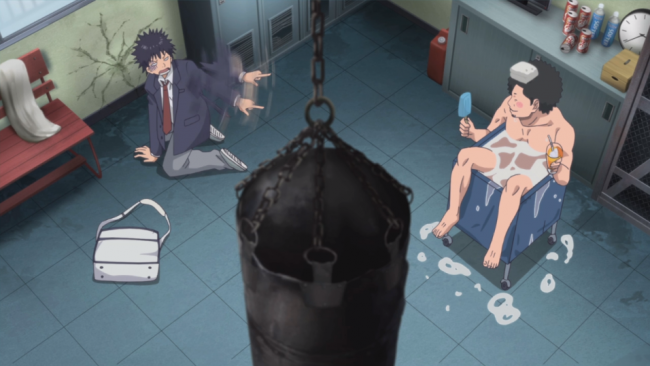 Ahiru No Sora isn’t the story of one guy believing just that bit more than everyone else and becoming king of the court or 3-pointerkage. Like the game itself, it’s a collaborative effort, telling the story of this group of misfits and how they’re going to get past their individual hangups and become a successful team, despite how tragically underdogged they were when they started out.

It’s why this first series is going to be running for 50 episodes. Something that took be aback if I’m honest when I first realised it. But when you’re going at the pace this show is going, taking six episodes to play out a single game of basketball, then you need that extra time to dig into the characters more deeply than a seasonal anime might struggle to do in a mere 12. And it works.

I want to see Sora’s prove himself over and over, I want to see Moroharu rediscover his passion for the game and get past the mental blockers in his head stopping him from reaching towards his potential. I’m looking forward to seeing Kite get over his bad attitude and realise he doesn’t have to be the one to carry the team. I’m even weirdly invested in Yasuhara discovering he has an enjoyment of the game and working hard to catch up to the rest of the players despite starting from square zero.

Looking at it all after taking a step back, this is a pretty standard underdog sports anime, showing a bunch of kids come together and become something much greater than the sum of their parts. It’s an age old story told over and over again in movies, T.V. and anime.

Yet this was the one that grabbed me. Through a combination of some great animation during the games themselves, the very helpful explanations as to why this strange sport can be so impressive and the very likeable cast of characters, I found myself very invested in the series going forward.

I’ve become so accustomed to seasonal anime now that I’d forgotten how a longer form series can invest you into events in a much deeper way. It’s only with hindsight that I can really see the Stockholm syndrome element to my relationship with Dragon Ball Super. In that the show ran for that long without a break that my time invested into the series began to warp my perception of it.

I was so far deep into show at this point that I had to sing its praises to justify the time I’d put into it in some weird way. It’s the balance that these long form shows need to strike, to justify their prolonged length without feeling like they’re just dragging things out.

Ahiru No Sora doesn’t feel like that, each episode is bringing something new to the table and so far I feel like it has made great use of its run time. It’s a show that, while focusing on the sport of basketball and how people can become great at that sport, ultimately could have been about anything.

Cool Runnings is a great example of putting the most random of sports and the most ill suited of participants into it and making it a great character piece. Dodgeball: A True Underdog Story is even more on the nose about what it’s making fun of, while also being a perfect example of it. These are movies that we aren’t drawn to because of their plots, we’re drawn to them because of their stories.

And yet, knowing all of this. I’m still kind of interested in Basketball now. Although I’d be more up for playing it myself than actually watching it on the T.V. Despite everything I’ve said about the act being incidental to the joy of watching passionate people act passionately about the thing they love. That enthusiasm is still infectious.

And while I care about Sora and the gang’s story in the end, I also find myself wanting to enjoy basketball on some greater level regardless. And that’s the power of anime at the end of the day. A medium I am really glad to have invested my time into these past few years, as it brings a greater appreciation for me to things I previously hated.