Every now and then, culture manages to jump it’s pre-appointed station and grab the attention and imagination of this cynical old internet. Untitled Goose Game was one slice of media that managed to charm the pants off everyone leading up to, and follow its release on Switch and PC a few weeks back.

Like so many games of this type though, the buzz surrounding the game ended up being far more rewarding to interact with than the game itself could ultimately live up to.

I picked up Untitled Goose Game on the Switch after reading so much praise and positive reaction to the game. And to begin with, I could see why this strange little indie game, made by a four person team in Australia, had grabbed so many people and filled up my Twitter feed with excitement and creativity.

The Goose game is an experience simple in premise, and expert in execution. You play as the untitled Goose, a horrible waterfowl whose sole purpose in life seems to be to reap chaos in a small, picturesque country village. The game’s visual style and approach is incredibly charming.

The unsteady waddling of the goose, combined with the resident’s seemingly unending patience towards its antics, as well as the lone piano player accompanying the game as its soundtrack make the game utterly charming and fun to see small clips off in trailers and people’s clips they share online.

Unfortunately, from that distance is how I best feel I can interact with the game, as much as it pains me to admit that. After playing the game for myself for a few hours, the Goose game’s appeal only went so far. There isn’t a concrete structure to the game. Rather, you start in an area with a checklist of things to do. 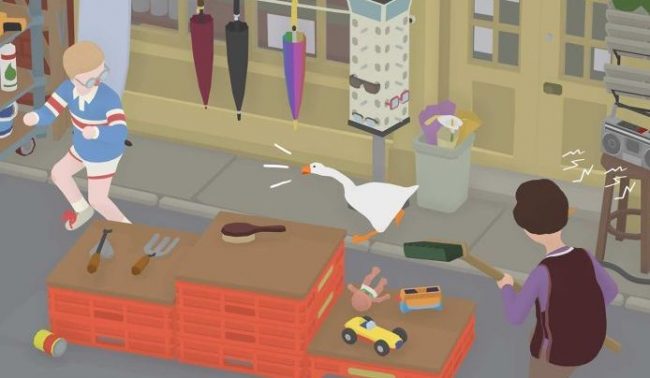 Once you accomplish a set number of these tasks, something happens in the world that allows you to move into the next area of the village. In this respect, the game is a sandbox. Once you have opened all routes and avenues around the village, you can explore and be a menace to the residents at your leisure.

If you enjoy just playing in this sandbox, and seeing what you can get away with, then I can see why this game would appeal to you as much as it appeals to so many people. Sadly, for me the game’s moving parts don’t seem to deviate too far from the items that appear on your to-do list.

While I’ll admit that I only spent a few hours with the game, before long it felt like I was just doing things to get them crossed off my list rather for the joy of the “simulation”, and many of the more time intensive things on that list end up being more tedious than enjoyable. Having to collect a long selection of items and gather in a particular spot ends up being more troublesome than enjoyable, especially when you’ve got some stubborn human undoing your work at every opportunity.

All of the charm and my enjoyment of this game comes from seeing how everyone else is managing to enjoy it far more than I am able to. Seeing fan art, people inserting the goose into other franchises and the memes and GIFs that have come about as a result of this game is far more fulfilling to me than the reality of the game.

There are a few franchises that I prefer to admire from a distance, ones that actively resist you enjoying them yourself, and yet are fascinating to observe from the outside. EVE Online is always the first one that comes to mind. While this and the Goose game are as far apart from one another as games can get, one thing they do share has been the story that rises up around them.

There have been some utterly fascinating stories that have happened within EVE; huge battles that stretch out for week, thousands of dollars of real world investment eradicated in the space of that time. Hearing these stories about the layers of complexity within this game make it seem fascinating.

The problem is, as soon as you look at the game up close, you realise the moment to moment gameplay is more akin to managing menus and spread sheets rather than participating in this huge interstellar community. Football Manager is even more guilty of this, I’m forever hearing my friends telling amusing stories or regaling me of their achievements in the game. Playing the game itself though seems like the more boring thing I could ever spend my time doing.

Goose game is cut from similar cloth, in that I love that there are so many people out there are getting so much out of it, and I love hearing people’s stories and experiences with the game. As well as the things people have created outside of their to express their passion and admiration for the title. I just got nothing from it when I managed to get hands on it for myself.

It’s just an example of how you can appreciate and respect something despite it not being for you. I don’t feel targeted or bitter that there’s a game out there that people love that I don’t. Something I wish more “gamers” out there could get through their heads. I love what Untitled Goose Game is going, but just don’t expect it to pop up on my Game of the Year list in December.