The second half of Matt Groening’s Disenchantment dropped on Netflix not too long ago, and it almost went entirely under my radar. Unlike the first half of the series, which kind of felt like a bigger deal when I wrote about it… over a year ago… Wow, and they’re still just calling this the first season?

My big take away from that first half of the series was handily summed up by the title of the show, it wasn’t until the final handful of episodes where it felt like the scattered events of the series thus far started coming together, leading me into a sense that there was grand scheme behind it all and maybe the second half would take a less scatterbrained approach to it’s story.

My biggest problem with Disenchantment was that it seemed to indecisively dart between being a sitcom and a fantasy drama. It was a similar line that Futurama managed to toe so well during its first four seasons. Only, Disenchantment failed to meet those same highs and pay of with those same satisfying highs that Futurama did. And the second half the series really just continues on in the same way the first did. 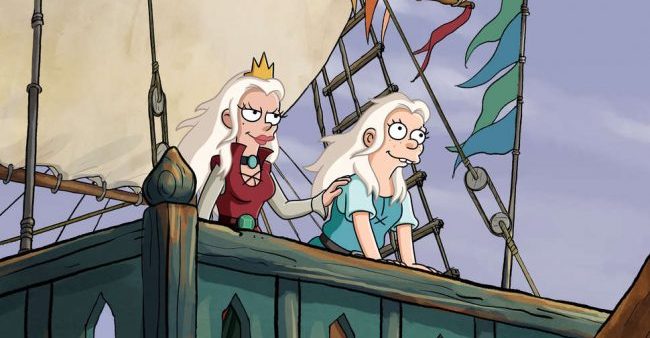 To me, the main cause of this failing was just how unlikable all of the characters were. The real strength of the other shows with Groening’s name attached to them is how much heart the show’s casts had. Even Bender, for all of his negative character traits was an overly emotional wreck who would make the sacrifice for his friends when push came to shove.

The trio of Bean, Elfo and Luci are the flakiest bunch of protagonists we’ve ever had in any of these shows. Princess Tiabeanie is supposed to be the heart of the show, but only really shows that strength of character now and then, and when she does, it oftentimes lacks the follow through to make it through to the end of the episode and complete the emotional arc. Which really helps me describe the other big issue I have with this series; the inconsistency of its writing.

With the show flitting between self contained, sitcom style episodes and entries in an ongoing narrative, there doesn’t really feel like there’s a consistency of character from episode to episode. Which can lead to frustrations coming into a new episode not know if they’re going to acknowledge something that happened at the end of the previous episode or ignore it completely.

For example, The first  handful of episodes in part 2 all tell the same story of Bean discovering the truth of her Mother and then escaping and then rescuing Elfo from Hell. All of these episodes are telling the same story and follow on from one another. After this arc reaches its conclusion, things slow down and we see an episode focusing on Bean’s dad: King Zog.

It deals with with the two women who have been in his lives and how his relationships have mostly ended in misery. This episode features a woman called Ursula, who is also a bear. The two hit it off and Zog enters a relationship in which it’s the first time we’ve genuinely seen him happy. The point of the episode is about how a real relationship need to be open from both ends and Zog needs to let Ursula be what she wants without controlling her.

Zog realises his selfishness at the end and gives Ursula the freedom she desires at the end. It’s the most genuine and effective piece of character development I’ve seen throughout the series thus far. Ruined by the fact that right after the gesture, Ursula just vanishes off screen, without saying a word. Then she’s never mentioned again throughout the series, and in the very next episode Zog is back to his old, tyrannical self.

Which is why this mix of sitcom tropes and drama tropes becomes frustrating. In that very same episode, Bean is obsessing over a box her mother gave her, something that does come back as the series goes on, and yet the other story line is forgotten entirely, despite it containing one of the few pieces of good character growth throughout.

Which events seem to span multiple episodes and which seem to end with the credits frustrates me. There are a number of other examples I could give of a story being set up, then events taking a sharp, veering turn before seeming to forget the event that kick started the story off in the first place. Like the episode that deals with Bean’s relationship with her brother and how the Octopus monster Derek makes friends with suddenly becomes a mindless monster part way throughout the episode. And then they even fluff the conclusion of the brother/sister story line.

Disenchantment just failed to charm me at every opportunity. The first half of the series grabbed my interest by giving me a show that reunited veteran voice actors such as Billy West, John DiMaggio, Tress MacNeille and Maurice LaMarche together again in another Groening style show. 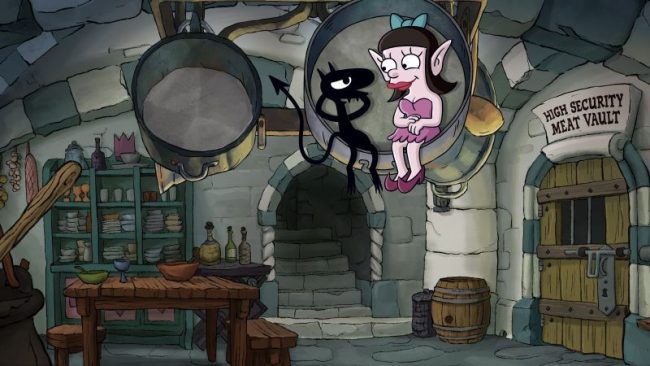 But after that wore off, the lack of anything for me to latch onto aside from the voice actors ended up turning me off the show completely. Not helped by the fact that the writing isn’t all that funny either. The humour, like the Simpsons and Futurama before it tends to come from situations, visual sight gags and old fashioned slapstick. The problem is, I felt no connection to these characters, I didn’t like being around them and thus failed to connected with them enough to care what happened to them.

Disenchantment had the potential to be a much better show than it ultimately ends up being. While I wouldn’t describe it as bad, it’s not great either. It doesn’t feel like it makes the most of it’s setting, ridiculing a high fantasy setting like Lord of the Rings, or its more modern iterations like Game of Thrones.

While I should give it props for resisting the urge to be a series of references to other popular franchises, it’s still a comedy and fails in it’s primary goal of making me laugh. I can kind of see why Netflix hasn’t really been pushing this second half of the first season.