As a rule, I’m not really that big a fan of the isekai genre. Bad luck me eh, considering that it’s the big thing right now, us getting more than a couple shows in the genre per season. I like a story about characters overcoming adversity, and growing in the process. Not just that, I also like shows with well defined and understandable power systems. Isekai often lacks both these in favour of putting a character into a position of ultimate power and then chronicling their inevitable rise to the top.

Power fantasy of this extreme variety has a really limited shelf life for me and I oftentimes bore of it quickly. However, that isn’t to say the concept can’t be toyed with and done in a way that really does grab my interest. Like the show I’m talking about now; Ascendance of a Bookworm is an isekai show that I came into knowing nothing and really comes as the biggest surprise for me so far this season. Motosu Urano is a bookish wallflower who dies in an Earthquake, then wakes up in *dun dun* another world. Rather than having some grand magic or video game-esque super power to get her by, she wakes up inside of the body of a five year old peasant girl, and a particularly frail one at that. The only advantage she gets is retaining her memories and knowledge of her adult life in modern day Japan.

Now known as Myne, the girl’s sole driving force is to continue her life passion from her previous life: Reading. Which, as it turns out, is particularly difficult for a medieval era peasant family where even basic literacy is not a given. Thus the series as it exists so far has been bouncing between two major stories; Myne (and by proxy; the audiences’) introduction to this low fantasy setting, as well as the people in it and also focuses on Myne’s mission to find books, or failing that, write them herself.

Myne certainly has one up on everyone around her in this world, being an educated, adult woman who has spent most of her life reading everything and anything she can stick her nose into before now. But is oftentimes held back by the body she now finds herself in, thus having to rely on the friends and family around her to enact half of the things she is trying to do. It gives the show a much slower pace that I really appreciate, there’s more time to slowly sink into this new world with Myne and see all the small changes she makes to her life by bringing using her modern day knowledge.

Making shampoo for example, or weaving baskets and even making pancakes. It’s no superpower, but it’s still showing her forging a path to moving above her peers, as is the grand old tradition of Isekai. Only, she’s doing it purely through knowledge and education instead of having some staggering super powered advantage. If anything, her current age and body are acting as a handicap.

Overall, the show is very sweet and very cute. While high concept, most of my enjoyment comes from the tone and setting of the series. It’s been very low stakes thus far, and just seeing these people live their lives with the added twist of Myne constant scheming to learn this world’s language and make the most of that knowledge is really fun. Speaking of tone, the show does a great job of setting this scene thanks to its scoring; which makes heavy use of fiddles and a harpsichord to add the old world feel to this medieval setting.

There’s an obviously strong focus on setting, character and tone of this world that’s really effective on me.

Verdict: Very charmed and very interested to see where it goes 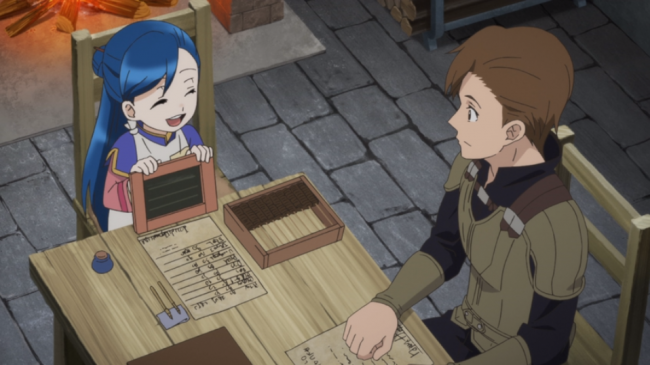 The first part of the first episode frames the events we’ve seen thus far as a flashback. As we see a, still child, Myne in a position of more luxury than where she’s been spending all of her time thus far. I’m not sure if this show is going to keep it’s leisurely pace throughout or if it’s going to add some danger or drama as it goes. But as of right now, I’m content with seeing this quaint, happy little family live their lives, along with their eccentric daughter who keeps having weird ideas and inventing new things despite hardly leaving the house.

If the anime about an adventurer adopting a demon girl from last season was any indication, as soon as the characters started getting out and about, I became much less interested in what was happening. Being an Isekai, maybe this show will escalate to the point where it does eventually lose me. Or maybe it’s pace will start to grate before I can make it through the entire run.

But as of right now, colour me very charmed by it all. And I intend retouch upon this one in the future to actually say whether I kept going with it or if I fall way. So watch this space.