It’s a pretty new experience for me, to dive into reading manga based on the anime I’m watching. Some would say it’s the natural progression of an insufferable know-it-all such as myself. For the most part through, I want to avoid being that guy. Manga and Anime are very different mediums with different expectations of their pacing and storytelling style.

Quite often, the manga is going to a better version of the story because they have a more open approach to the speed at which their story is getting delivered. To the Abandoned Sacred Beasts is a manga I glanced at though and surprised at just how different it is from this season’s anime adaptation.

There are a lot of reasons that an anime will make changes to a story in the process of adapting it. As I already mentioned, it can partially come down to a matter of pacing. Especially in a show like this where they only have 12 episodes to tell their story. The need to rearrange events and throw exposition out much earlier than intended can remove the need for constant flashbacks that may throw off the pace of an action sequence down the line. 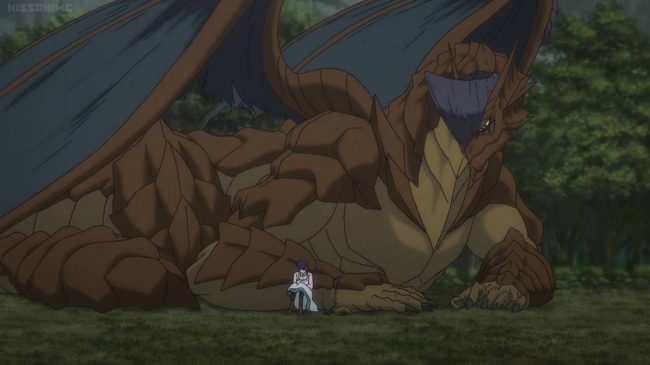 The problem is, it can change the context of events as they were told in their original form. In the anime, the first episode throws a ton of exposition at you, introducing the main characters, the villain and the history of the world. We learn all about Hank’s leadership of the incarnate unit, the promise they all made and his betrayal by Elane and Cain.

In the manga, the story begins with Shaal walking into a bar and shooting Hank with a rifle with little to no explanation. An event that doesn’t really happen until half way through the second episode of the anime. Thus the events carry entirely different weights in both versions, with it being a shock and mystery in the manga, while the events preceding it in the anime make Shaal’s actions totally understandable.

The shock and surprise of the event in the manga is a big part of what makes that story what it is. The early parts of the manga are all mystery, it feeds us the information about the incarnates (or god soldiers) in bits and drabs, where as all of the information was thrown at us in the anime. What makes it even stranger is how Hank laughs off the attack and makes a joke about it in the manga.

Hank’s character feels completely different in both versions. The Hank of the anime is buttoned up, stoic to a fault and shows little emotion between rage and anime angst. The Hank of manga also has those two emotions in excess also, but covers it with a carefree and slovenly mask. It makes him a more attractive character as his humanity is still there for all to see. Which is a major story point of series.

In many ways, Shaal feels like the main character of the manga, she is certainly the viewpoint character in the very least. Because the manga is set up as a mystery and we slowly learn about the world as the story unfolds, as she does. There isn’t a need for that in the anime seeing as how they come out top heavy and load you with everything you need to know beforehand.

It kind of works to the show’s detriment, at least in the respect that the wartime stories of these soldiers seem much more interesting than the tragic fall they all take when they return to society. The longer the anime has been going on, the less I’ve found myself interested in it. Without the grander mystery of what the hell is going on to keep me engaged, the monster of the week formula has gotten very old very fast. There’s simply nothing else to keep me interested beyond the relationship between Hank and Shaal, which has already tied up, just in time for them to get separated.

In the end, To the Abandoned Sacred Beasts is a perfectly serviceable action show that struggles to make an impact thanks to the other strong action shows it has to compete with in the same season. Had it taken a larger influence of the manga and focus on the Gothic mystery within the setting, taking their time with it instead of just reworking it into a run of the mill action show then I might have been more excited to see how it would turn out.

The character’s feel flat, the action is only okay and the best thing the manga had going for it was gutted by an overly expository first episode.