As it turns out, the Ice guy was a more formidable opponent than I had expected. With his stand taking the form of a nigh impregnable suit of armour by the name of… white Album? Really? 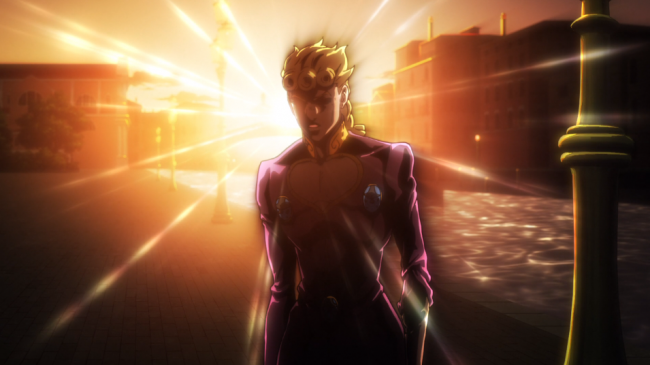 As it turns out, riving into a river when battling an opponent that can create ice turned out to be a bad idea after all, as I had initially assumed. So now Giorno and Mista find themselves in even more… well, cold water. Right at the edge of the location in the photograph, but being dogged by an unstable enemy with the ability to rip their skin off.

Both Sex Pistol and Golden Experience are of limited use against this foe, and the pair begin to worry about how they possibly defeat such an opponent. Which is typical Jojo fair, to make their inevitable success all the more triumphant. Their powers hardly working in the blistering cold, while their foe works to simply overwhelm with with force.

Before things can seem too bleak though, Mista has an amazing idea. Telling Giorno to make as much arctic grass as he can, as it’s the only form of life he can cultivate in the low temperatures, and Mista proceeds to frantically pull up as much grass as he can. His plan; to make a sick-ass sled… no a snowboard! He gets a few yards before White Album thaws the grass and he drops into the water.

Mista, adamant they need to defeat this foe here and now, realises that White Album has a hole at the base of the neck, allowing Ghiaccio to breath while encased inside. Attempting to use his stand to redirect a bullet into the hole, it seems Mista’s plan was predictable. Ghiaccio freezes the air around him into ice crystals and somehow perfectly redirects every bullet from Mista’s gun back into him.

Mista begins to lose hope, as he gets shot up, only to be broken out of his stupor thanks to a rousing speech from Giorno that culminated in him smashing his own arm up for effect. Gaining a second wind, Mista enacts his plan of shooting the enemy a whole lot, consequently getting himself shot up a whole lot more. But ha! that was all part of his master plan, as the excessive bloody splash back freezes on Ghiaccio’s visor, giving Mista the opportunity to kick him into a spike on a nearby lamp post.

The plan falls short when Ghiaccio uses the blood to freeze supports behind him and prevent him from getting impaled. But just as Mista is about to lose consciousness, Girono steps up and steps on the enemy, several dozen times, driving the spike through his neck. The episode ends with a good old homophobic joke about Narancia mistaking Girono pulling the bullets out of Mista for a sexual act…

This was an action heavy episode. I debated with maybe giving the Jojo reviews a miss in the future as they often end up as simple play by plays, with little to add in terms of character development. The thing that eventually did make me decide to write this up was Mista’s inner monologue towards the end of the episode.

He realises that the only reason he fought on against the enemy was because of Giorno’s overpowering resolve, and that despite him being new to the group, he seems to regard him as a Capo even more than he does Bucciarati. Which is utter bollocks, if he hadn’t been too busy suffering multiple gunshot wounds to the head, he would have seen Bruno take down Prosciutto and Pesci almost by himself as few episodes back, which was boss.

I like Girono, but so far, he feels like a pretty inconsequential Jojo. I’m sure the story will go places and he will come good in the end, but the stand-alone nature of this series makes me wonder if anything that’s happening is going to have any effect on the future parts. Much like how Josuke had his own thunder usurped by Jotaro at every turn in part 4, I feel like Mista and Bucciarati are more interesting characters than Girono, whose grand endeavour to take over the Italian mob has hardly been revisited since the first couple of episodes.

With Girono’s own connection to the Joestar lineage being tenuous at best, I wonder if stand along series are the norm going forward and a single ongoing story ended with the events of part 3.