I don’t think it would be a stretch to say that Studio Trigger has a certain style. A style in their visual approach certainly, but more so a common sense of style in the kinds of stories they like to tell. They like huge stakes, adolescent romance to save the day, and they’ll most likely squeeze some aliens in there somehow. 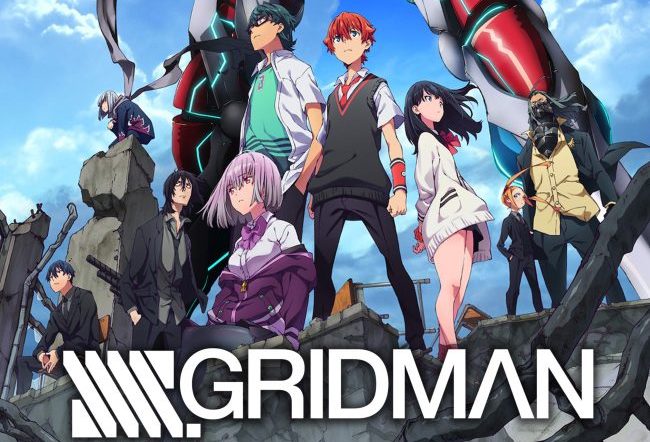 SSSS Gridman is a show that kind of took me by surprise. Honestly, I had mixed feelings about the Trigger shows I’ve seen up to now. After the wider community seemed to rally against the ending of Darling in the Franxx pretty hard, it turned me off them even more.

It was only when I started to encounter encouraging rumblings of positivity around this new Gridman show that I decided to go and binge the whole thing in a weekend.

SSSS Gridman follows the story of a red headed high schooler suffering from the most dreaded of storytelling tropes: Amnesia. He wakes up in a classmate’s apartment being told he collapsed outside of her family junk shop. As he is leaving we have a whole array of mysteries thrown at us right off the bat; his amnesia, an android calling out to him from old computer only he can see and hear, huge monstrous siluettes lining the sky.

The opening few episodes do a great job of setting the mood and continuing to throw bizarre things at you until you just feel the need to keep watching to understand what the hell is going on in this world. As I found myself drawn in by these grander mysteries, I found myself actually becoming more invested in the mundane aspects of Yuta’s life.

Early on we are introduced to our main cast, and the show takes on a Monster of the week approach to its narrative. Something that was very common in the kind of shows Gridman is harkening back to. Kaiju begin attacking the city out of nowhere and Yuta is drawn back to the junk shop by the mysterious android in the computer.

Yuta, supported by his friends Sho and Rikka merges with the old computer and manifests in the world as Gridman, battling the monsters and slowly becoming more powerful over time, thanks to a series of very fan fare heavy combination attacks thanks to the ever growing number of supporters he gains.

Everything about these early episodes gives me a sense of nostalgia for a genre of show I never really knew I had any nostalgia for. I grew up watching a lot of the original run of Power Rangers, I was obsessed with them in fact. So much so that I gravitated towards all of the other shows that were imported from Japan because of Power Rangers success.

Little did I know that many of these shows would be inspired by the Ultraman series more than the Super Sentai shows that borne my love for the genre. But the way the action is executed in Gridman, it’s evoking nostalgia for both. The computer generated characters move slowly, clumsily. Something many modern anime are criticised for when they chose to use computer generated characters rather than hand drawn ones.

But in Gridman, it works in its favour. It reminds me of the battles with the Megazord in Power Rangers; people in bulky, unwieldy suits, clumsily swinging at one another thanks to their extremely limited movement. Because it’s evoking something it’s easy to forgive it, which turns out to be well founded by the time the show starts to change.

After a point, the show’s villain and the heroes become aware of one another. Yet, rather than make any permanent moves to deal with the other right way, they continue to act civilly toward one another in public, continuing to have their city destroying battles while also chatting during their lunch breaks.

Like many Trigger shows, Gridman takes a turn around the half way point of its run. While Yuta remains the hero of the show, the focus begins to shift from him, toward the villain and we learn that SSSS Gridman is not Yuta’s story, but in fact Akane; the antagonist.

What started as a light, fun throwback to the times where these shows were rife, becomes a tale about belonging, acceptance and realising the world doesn’t revolve around you. This revelation happening in time with a sudden jump in the movement and animation style of the Kaiju battles before now, in which they begin to move far more fluidly, in a way that’s jarring.

All this leads to a revelation that recontextulises everything we know about the nature of the world the show takes place in. In that typical Trigger style I spoke about, both the drama and the stakes increase and who and what we care about suddenly shifts.

I really did get a lot out of Gridman, between its nostalgic ties I never knew I had and the eventual revelations of the end of the series that answer all the mysteries the show set’s up in its first few episodes in a surprisingly satisfying manner. All in a wrapper of cool visual fights, and prolonged transformation sequences that a doof like me always enjoys.