A game by the name of Into the Breach caught my eye recently, a tactical role playing game from developers Subset Games. It had an Advance Wars vibe to it that really grabbed my interest. But rather than just going out and buying the game I liked the look of, like a normal person would. Instead I found myself loading up Subset’s first game and losing a couple dozen more hours to FTL: Faster Than Light.

FTL is a top down, real time strategy roguelike. The game puts you in control of a federation star cruiser, on a dire mission to cross a sector of space while a rebel fleet is in hot pursuit. You start in one of a number of preset ships and as you progress you collect scrap, new crew, new weapons and crew systems, you build yourself up enough to take down the Rebel Flasgship and destabilise them enough to ensure victory for the federation.

The text box at the beginning of the game is the only indication of its story FTL gives you. It doesn’t front load its story at all, in fact you have to piece it together yourself. All of the game’s lore and world building feel like they come as a consequence of the game mechanics the developers implemented. The lore is bare bones enough that’s its enticing to learn more but also allows you to just fill in most of the gaps yourself. 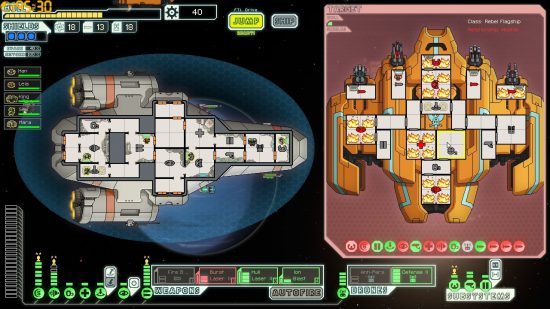 When you play the game for the first time, you’re given a single human made ship, manned by an all human crew. Your introduction to the alien races and interplay between them comes through the game’s randomly generated encounters, which can be both peaceful or violent. You learn a little snippet of information thanks to context clues and situations that the flavour text for each combat and scenario provide. It allows you to get a better idea of what these peoples are about without overtly telling you.

The random nature of encounters means that new information is doled out very slowly. This pays off in the best way. There are certain events that you encounter and seem innocuous at first, but in fact these are multi stage, optional quest lines. During which the player must meet a certain number of criteria such as having a certain type of crew member, as system upgraded to a particular level or simply sparing them when they try to surrender.

The roguelike nature of the game means that player can bump against these encounters over and over without realising what they are, until they happen to do things in the correct order. It’s a great little surprise to find yourself rewarded with a little chunk of insight into these aliens, and one of their ships that is added to the hanger. That is of course if you do stumble upon these and don’t just bang your head against the game over and over while reading a wiki.

Much of the charm of these little moments comes from the thirst it inspires to just keep playing the game over and over, such is the nature of a rogue like. Giving you more options right off the bat means you have further opportunity to try entirely new strategies when running through.

Its the kind of game where “just one more run” becomes a half a dozen and you end up losing half of your evening as a result. My love for the game comes from just how different each and every run can be. While it can feel like you’re at the mercy of the random number generator at times, your ability to gain scrap generally means you can always customise the ship in somewhat a way you want. Chances are you’ll eventually find a shop selling the crew or system you’re looking for, but then again you can spend half an hour playing a doomed run too.

While making a run based on a combat focused crew and high level teleporter is really fun. Sacking enemy ships and gaining more reward as a result. When it comes to the final flagship, most unique play styles seem doomed to failure. 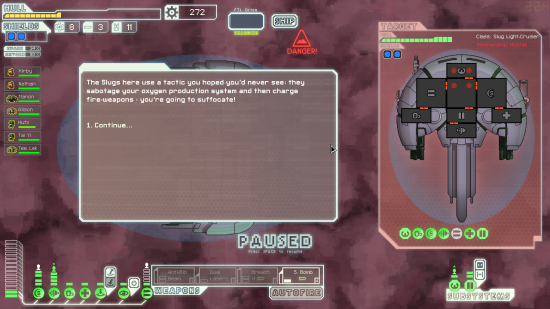 Which leads me to what I feel is the most frustrating thing about FTL: it’s unfairly difficult. While I praised the randomness that can occasionally reward you, there is no real downside to those little quest lines, aside from missing the ship you wanted on that particular run. All of FTL is based on random chance though and most of these elements of randomness can end up more frustrating than enjoyable.

While making your way through the different sectors of the game, chances are you’ll stumble across one of many distress calls from nearby locations. Because those flashing little lights are near impossible to ignore, you end up going to each and every one of them. Upon arrival you’re presented with a scenario. For example, one of these involves a station infested with giant spiders. Now, unless you have a weapon or crew member that provides the blue (guaranteed success) option, then your options are generally to intervene or ignore. I’ve played the game enough to know that going aboard that spider station can result in the loss of one of your crew if you’re unlucky.

A moderate amount of scrap is the reward for success in this case, and while scrap is useful, it never, ever feels like its worth taking the risk when you could lose a vital crew member at random. It means that, whenever I encounter these situations, I always walk away, because its simply not worth the risk. It might not have been so bad if the game addressed the rewards or the chances of success or failure when picking an option, but they don’t.

This totally blind randomness is off-putting and makes me want to avoid certain aspects of the game. But these are minor inconveniences compared to the game’s biggest issue though: the final boss. The final encounter with the Rebel Flagship takes place over three stages, and this boss is total garbage to fight even on the easiest difficulty. I still haven’t even been able to finish the game on the medium difficulty, I end up spending so much time trying to hold my ship together that I have no time or resources to spare to prepare of the game’s final encounter.

It’s even rare that I finish a run when playing on easy mode, and when I do it’s generally using a similar strategy. One that involves pouring as many resources into giving myself as many attacking options in a short burst as possible, taking it out before it gets the chance to totally decimate me.

I love FTL but hate it certain aspects of it at the same time. The little universe it has created is just detailed enough that your imagination fills in the gaps, while dripping enough actual information to where you end up learning new things even after 100 runs. That, plus the near infinite ship/system/crew/weapon combinations mean that the game is never the same twice.

It’s a lot of things I love about video games bundled up in a smart little strategy game, but it’s elements of randomness and difficulty make it frustrating enough that it stops it from becoming one of my favourite games ever. Which it easily could be if the final boss wasn’t something I end up giving up on before even starting to fight it. I do love FTL though and will continue to return to it semi frequently too, unless of course I buckle and buy Into the Breach. (spoilers: I did)