I already mentioned I wasn’t too hot on the new Mass Effect. The thing I felt was one of the biggest let downs in Andromeda was that it felt like a Video Game first and a story second. I know, crazy right. Seriously though, I never really cared about the gameplay aspects of Mass Effect. It was always the world building and the character interactions that drew me in, and I think a lot of other people felt the same way. It was a kind of science fiction, a space opera that we rarely see in video games, and it might have been too much to hope that EA would allow Bioware to do something similar for Andromeda. 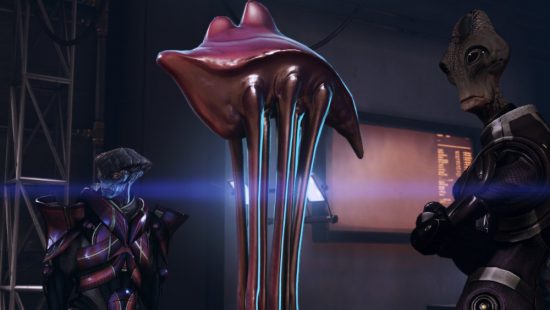 To boil this issue down to the most basic statement I can: The aliens don’t feel very alien anymore.

In the original games meeting a new species felt like a treat. They were all their own unique snowflakes with different aspects and histories and everything. They felt, well, alien. On top of that, you felt like you were in a hostile territory in the first game, everyone was against you. Most people you spoke to seemed to have a chip on their shoulder when it came to humanity. It gave us a sense of wanting to overcome that adversity and prove ourselves. As the series went on and we felt comfortable with the universe we had been existing in, we focused on another thing: the relationships we had forged and the oncoming threat of the Reapers. And then, that story ended.

Bioware managed to create a whole world that felt real, breathing and a place you wanted to be. Ignoring the whole Reapers thing. They managed this because they made us have to work for our place. Humanity, despite what the Volus and the Batarians might have thought, didn’t have a free pass. A lot of races didn’t like us, we were the upstart new guys who wanted to barge our way into everything. Of course we did, everything was new; new planets to explore, new races to meet, learn about, interact with and probably fuck. It was an uphill climb made all the more rewarding by how diverse and fleshed out the different races were.

It wasn’t just that though, Aliens didn’t just boil down to their race. Bioware managed to fill their games with individuals within their species. Not all Turians felt the same way about humans, not all the Krogan were thuggish brutes. It felt like a lived in world. There were so many varied species that all wove together in this little societal web, a web that we were dropped right into the middle of. One we could become a thread in, or be consumed by the spider. There was this whole world of politics and history that had been going on before we had even gotten involved. Navigating that was part of the challenge. It’s why I loved the series and was excited to see what Andromeda had to give when it came out. A new Galaxy meant whole new races and cultures to explore. Right. 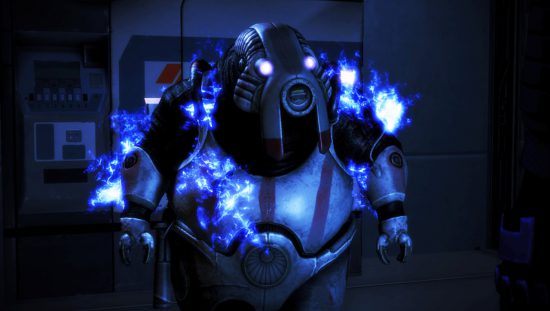 Andromeda was supposed to be a fresh start in a whole big stack of ways. It was the promise of things being new again. Where the oppressive dread that loomed over players throughout Mass Effect 3 could be replaced with that sense of wonder, of exploration and of challenge that we felt playing that first game ten years ago. What we got instead, was place where everyone falls over backwards to accommodate the Pathfinder without hesitation. While Shepard had to fight for everything, even when the galaxy was collapsing around her. Ryder seems to have everything just fall into his lap, she’s in Andromeda for five minutes and becomes the most important person immediately, with little to no justification other than he happened to be there.

Even when other pathfinders show up, they contribute nothing towards the colonisation efforts and leaving everything to Ryder. Things falls into place far too neatly for my liking in Mass Effect Andromeda, especially when it comes to introducing the new alien races.

The new Alien races introduced within the game seem too familiar right off the bat. There are two primary new species introduced in the new game; the Kett and the Angara. On several occasions, the characters talk about first contact protocols with new alien races, making me wonder if there are going to be gradual introductions to the new aliens as we arrive in their Galaxy. An initial struggle to communicate and gain trust as both parties have obvious misgivings about trust from what we’ve seen in the game so far. A uneasy alliance eventually builds between the races as they combat a common enemy and become allies by the game’s end. Nah. That’d be cool.

What we actually got is the Angaran language translated within a few minutes. After which they are revealed to be incredibly relatable in their culture and customs to the races of the Milky Way, hell the Angaran are more like humanity than any other race in the series (except maybe the Batarians). And the Kett. Hell, they and the Angara might as well be painted black and white for all the depth to them. Sure there are revelations about the nature of the Kett, but by the time they were revealed I had no investment in learning more about them as I had just come to treat them as faceless murder fodder, as that’s what they spend most of the game being. 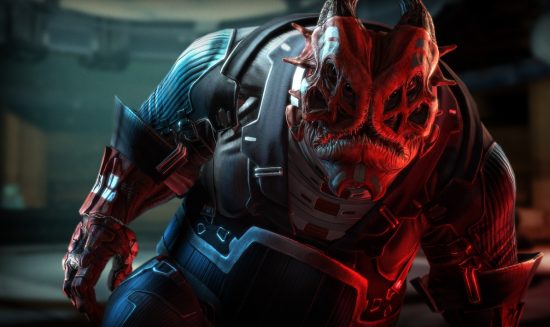 There is nothing truly alien about the new races as they seem so familiar in so so many ways. The original series has the Elchor, the Hanar, the Yagh, the Vorcha, the Quarians, the Drell, the Rachni and even the Geth. All unique races that had interesting backstories and quirks of their race that made them feel, well, alien. We learn next to nothing about the Angara, as they themselves know nothing about their own history, and their only real biological quirk is some kind of electromagnetic manipulation that never really gets displayed to any effect.

The only other race to speak of are the new “precursor” race that had a hand in creating much of the life and technology within the star cluster Mass Effect Andromeda takes place in.

It’s in this that I felt Andromeda falls into a familiar trap, one that a lot of science fiction manages to topple into. Revealed to be named the Jardaan, this race are responsible for the Remnant tech seen throughout the game, including the vaults that act as the driving force for much of the game. The problem here is that much of the technology revealed in this game might as well be magic for how much it does and how little the explain about it. Halo did the same the thing when 4 came out, as did Destiny. Throwing some almighty power into the mix to explain away anything you don’t feel like thinking too hard about. Additionally, you can make a bunch of cool looking “future environments” to set your shooting galleries in. I know this might come across as somewhat hypocritical, considering the original trilogy had the Protheans and the Leviathans filling the same role. But there were two important differences in the original trilogy. First, while the Mass Relays and the Citadel were incredible feats of technology, they were by no means magic. They were advanced, but served basic functions. The vast majority of the old race technology in the original was treated as a known quantity by almost everyone and none of it seemed unexplainable. Hell, The Codex even had an entry on biotics that explained how their actual friggin’ space magic worked.

Secondly, the original trilogy already featured hyper advanced precursor races. To just zip to another galaxy and do it again seems incredibly convenient and lazy from a writing standpoint. All in all, Andromeda feels like a safe bet by all accounts. Bioware made a masterpiece with their original trilogy of Mass Effect games. By comparison, Andromeda feels very by the books and loses out massively by comparison. I would have much rather they take a huge risk and fall flat on their faces here than just churn out a very mainstream feeling games like they did. That way, there would be hope for the future that Bioware still care about making the type of Mass Effect game people like me want to play.