Still conscious. I haven’t fallen into an Odin-like Food slumber as of yet, just enough energy to talk about number four in my games of the years list. I’m not sure if this is a game that is showing up much on other people’s game of the year lists, but it’s one I really think people should try as it is a step towards a new style of storytelling and game design. But before I get to that:

I wrote a piece in late Febuary about Firewatch already and how it’s a difficult game to pin down. It’s not your dad’s video game, rather it’s more of a story that the player participates in and effects in some surprisingly diverse ways. You play as Henry; a man who has taken a job as a fire watchmen for the summer. The game skips over time and you discover more and more about Henry and his only other human contact in the wilderness; Deliah.

Firewatch was very much a slow burn for me. Like many people, I finished the game and felt somewhat disappointed by how it ends. I’m not going to spoil it, but it seems to end with a fizzle more than a bang. However, the more I thought about it the more I appreciated what the game was trying to do. The game is about a man who is running away from his problems, and getting swept up in some mystery or conspiracy seems infinitely more appealing than having to stop and think about the thing that made him run out to the woods in the first place. The game is a character study wrapped up in a video game, and it plays with the expectations of the players who come in and think they know what they’re going to get.

It’s helped in no small part by two of the finest pieces of video game voice acting I have heard from Rich Sommer and Cissy Jones as Henry and Deliah. The characters banter and wit feels so natural and conversational that it really feels like you’re sitting in, listening on two people just talking with one another. The variation and direction of the conversations they have is impressive also, with things said early in the game effecting character knowledge right up until the end. 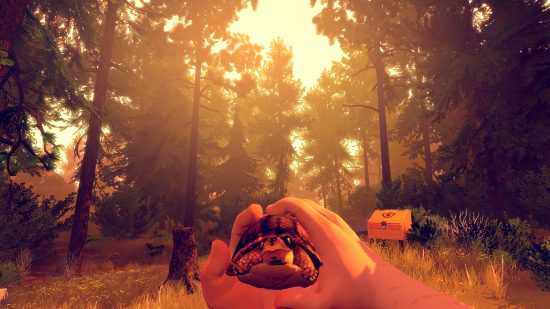 Finally, I want to point out just how damn pretty this game is. Seeing the forest bathed in an evening glow is a sight to behold. Firewatch is the best game I’ll probably never play again. It’s a lot of things to me and I think everyone should give it some time. You won’t need much either. It’s not that long.