The Netflix produced Marvel series have fast become a highlight of the superhero yearly calendar for me. Both the first season of Daredevil and Jessica Jones knocked all other competition out of the park in terms of their story, tone and production quality. It was a given that I was itching to see season two of Daredevil as soon as I possibly could.

I wasn’t disappointed either. While a much less focused series than the first, the story is spread out amongst three primary characters in Daredevil, The Punisher and Elektra. This has the benefit of adding two new fantastic interpretations of known Marvel characters to the series. It’s not without flaws though, as the final few episodes of the series lack a solid goal or antagonist to rally against, especially considering the strength of the finales of the previous two Netflix series. 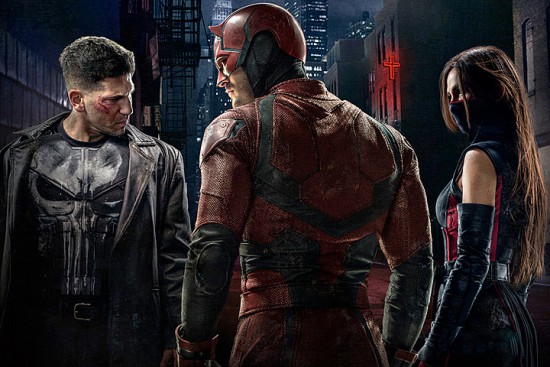 The real strength of the series for me were the two newly introduced characters in Frank Castle (Punisher) and Elektra, who both shine different lights on the vigilante life and provide some level of temptation for Matt Murdock in how his life as Daredevil could be different.

Matt has a staunch moral code for not killing, often to the point of lunacy. Which is what makes his character what he is. Despite the fact that it becomes steadily more apparent that what is his doing isn’t having the desired effect of stopping crime in Hell’s Kitchen. Frank Castle, appears in the first episode as some gun-toting vigilante who has been taking down criminals with military precision. His methods immediately bring him to Matt’s attention and the two come to blows in classic comic books fashion.

Jon Bernthal is personally my favourite thing about this series of Daredevil. He plays an incredibly intense Punisher that still manages to come across as sympathetic and heroic despite being a horrible murdering sociopath. He also has some of the most brutal fight scenes I’ve seen on a television screen, spending most of the series covered with blood and/or bruises.

All of the strongest episodes in the series heavily feature the character. Episode 3 is the first one that comes to mind. Frank has Matt chained to a rooftop after their most recent brawl, and the two spend the majority of the epode debating their morals and justifying what they do to one another. The two actors carry the episode fantastically and show just how both characters double down on their beliefs as a result. It doesn’t hurt that the episode ends with a long tracking style shot of Daredevil brawling his way down a stairwell in a fantastic nod to the similar scene in the first series.

Frank’s philosophy echoes Stick’s words in the first series, saying Matt does everything in half measures and putting criminals in prison via intensive care isn’t a permanent solution. It hammers home an internal conflict within Matt that his code of not killing might not be the way to do things after all. It’s something the character visibly struggles with throughout the series. It comes to a head in the late stages when Matt goes to confront Wilson Fisk in prison.

Vincent D’onofrio reprises his role as the Kingpin in a couple of episodes and is amazing. He exudes power, fury and control despite being in prison and his interactions with both Frank and Matt are amazing. Despite being in prison Fisk, is in total control and taunts both Matt and Frank that all they’re doing on the outside is just making his rise to power upon release even easier. Despite only appearing briefly, he kills it.

As amazing as D’onofrio and Bernthal in the series. It does have some shakier parts to hold it back. I had more mixed feelings about Elektra in this series, played by Élodie Yung. When she first appears in the series, she is a being of pure temptation and danger. Carrying a real Femme Fetale vibe. Her first few episodes show her and Matt’s past and how he thrill seeking attitude might be a strong temptation for Matt to give up the mundane parts of his life.

While she has this exhilarating effect on Matt in her first few appearances, as her backstory and character are expanded on she becomes a little less interesting to me. She becomes more of a plot device and love interest for Matt than the mysterious figure she was in the first few episodes she appeared in. I have no doubt she’ll become an important figure in future events of the Netflix continuity, but for the sake of this series of a single story, she ended up trailing off from a very strong start.

It’s a problem I had with the series in general. It begins incredibly strongly, with a sense of purpose in its direction. And for the most part it is fantastic, it’s in the final few episodes that it starts to go down route that feels tacked on or maybe setup for a future series. Either way it feels a bit separate from the episodes that preceded them. It focuses far less on Matt Murdoch and far more on Daredevil. One of the things I enjoyed about the first series was the duality, giving Foggy and Karen large amounts of screen time as the “mundane” side of the character.

This series spends much less time with them, having Karen digging (pointlessly) into some conspiracy around the events of Frank Castle’s family getting killed. A story that feels pretty unnecessary. Foggy gets even less to do and spends most of his time berating Matt for allowing their firm to dissolve. Duel lives are something I feel are important to many superhero characters. The temptation for writers to discard the more mundane aspects of a character’s personality for the sake of a show or movie is too strong it seems. I enjoyed the sections of the first series showing Matt as a lawyer. It showed two distinct aspects to the character, both trying to clean up Hell’s kitchen in very different ways.

In this series, Matt Murdoch the lawyer hardly exists. I get the feeling the final few episodes of this season were setting up for future events, as if they’re setting up for the Defenders crossover series. They still manage to give events relevance to the current series, but it feels slightly detached from the events of the early season when Frank was factored into events more heavily. Events in the first half of the dries felt much more enclosed and personal. The story had high stakes for the characters involved, but weren’t exactly global disasters. The Hand seem to pose a much grander threat, something that more than Daredevil maybe should have caught wind off.

There was this initial hope that Daredevil would connect more strongly with the rest of the Marvel Cinematic Universe. That maybe the Avengers or Shield might camera in some shape or form. As the series has moved on it has become apparent that the the Netflix series is going to remain mostly separate from the other series sharing the universe for the most part. In some way, it’s like regular comic book logic. When things happen in New York, not every single hero based there shows up to tackle the problem. So it’s not too much of a stretch to see the Hand flying under the radar of the other characters who have their own problems to deal with. 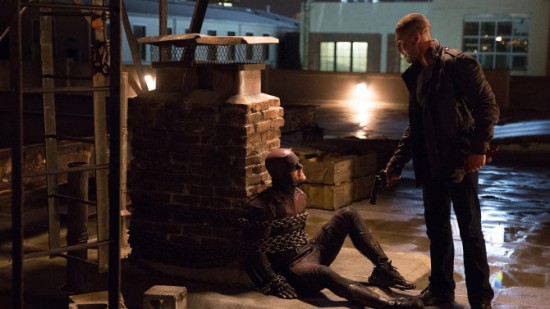 The Hand are the major villains of this series, a shadowy clan of Ninja fighting some centuries old war against Stick and his drivers. While they do pose some physical threat to the heroes, in the end they come across as rather shallow villains to end the series with. While no real time was invested in making the Hand any deeper than they first appear, the series instead relays on a series of blurred alliances and betrayals to pit the main characters against one another for various reasons.

So come the final episode and ending of the story, there is no real villain for them to rally against. The closest thing they do have is Nobu, who is hardly a character and just a threat. the series was noticeably lacking in this department, especially when comparing it to the previous two Netflix series which gave us amazing villains in Wilson Fisk and Killgrave.

It’s with good reason though as Punisher and Elektra more than make up for a charismatic villain. In the end it’s just one more feather in Netflix’s cap, showing they’re willing to go on and do something totally different. Making a series similar to the first Daredevil would have been easy and I’d probably still ate it up, but their willingness to go on to do something different really is to their credit.

While I may have spend a lot of this nitpicking the series, by no means does that mean I’m bashing it. In fact Daredevil continues to be one of the strongest superhero TV shows available right now. I just feel that with so much to compare it to, then it doesn’t hurt to critique. While not as strong as the previous two Netflix series in my opinion, it is still heads and shoulders above a lot of stuff on TV. It’s well worth a watch and has plenty of fantastic action and character beats to keep you watching. Bring on Luke Cage.