People like this show. I struggle to understand why. Okay, that’s not nesseserily true. I still watched this show to the end, and after finishing it I felt, I dunno… Bummed out, depressed, headachy?

You see, I recently started watching anime again and was hearing a lot of buzz about Netflix’s new show; Devilman Crybaby, I thought “what the hell, lets give this a go.”

So, to clarify. I don’t regard myself  an expert on anime by any stretch, I know what I like and that’s what I tend to stick to. I usually like my anime over the top, bombastic and silly. So I basically watch a lot of Shonen. I went into Devilman Crybaby pretty blind, not knowing much about the manga’s origins in the 1970s and how it went on to be incredibly influential and go on to inspire things like Evangelion, a show I also didn’t really like. I’ve looked into it more after the fact, but It didn’t change my opinion a whole lot.

Watching this, it becomes pretty apparent pretty quickly that Devilman isn’t going to be a show for everyone. It’s extremely excessive in its violence, in its depiction of sex and its nihilistic themes. When the show starts off, it has a monster of the week kind of theme going for it, but by the end it peels off and becomes a look at human nature, relationships and our tendencies to hurt one another. All through the lens of Akira Fudo, a goodhearted young man who gains the body of a demon and uses it to defend humanity against other demons.

I don’t know though, it all felt too heavy handed to me. I suppose that’s part and parcel of the experience when watching anime. It does have good subtext at times, but then it beats you over the head with obvious symbolism at others, showing you the same flashback over and over, often times just explaining it afterwards anyway. I don’t mind bleak media, but the oppressiveness of it can really turn me off at a certain point, which was exactly how I reacted to this show by the final episode.

That wasn’t the only thing that put me off though, the other thing is the animation style. I’ve read enough reaction to this show to know people will be calling for my blood after a comment like that. A lot of the fans of the genre seem to revere Masaaki Yuasa for his animation style, which is often times rough and scruffy looking. Again, it’s not for me. At times it can be really effective, lingering on really well animated shots that give real gravity to a scene. Then we get an extended action sequence that loots like I might have animated it. A sequence comes to mind; depicting a father discovering his son has become a demon, then killed his mother. As grim as the scene was, the visuals of the man trying to shoot the monster in front of him but being unable to kill his son, the anguish was palpable. Then you’ll get rubber people flopping about all over.

Some have said it’s a creative choice, that it’s supposed to signify the lucid and otherworldly aspects of the conflicts going on. Sure, that’s fine. I still don’t think it looks good:

But it was the characters that kept me watching in the end, like the father I mentioned before. The show does a great job of making you connect with all of its characters, even the ones that put up a front end up warming to you eventually. This ends up working in the favour of the show’s themes, because as it goes on and starts to deal with darker and darker subject matter such as human nature and just how terrible we all are, these characters all become victims to the horrors of the human condition. It’s a show about life not being fair, and how even the best of us get the short end of the stick by the end.

I think it really threw me for a loop in that respect. It makes this abrupt turn from being about killing evil demons in back alleys, then suddenly changing into this post apocalyptic story focusing on race wars and mob hysteria. The globe is in chaos by the end and people end up killing way more of each other than the demons do.

If there is one thing about the show I did like it was its soundtrack. It’s something pretty unique, mixing synthwave and electronica with gothic vocals in parts. It worked really well and was one of the other things that kept me watching. The show has a lot of style. Out of context there were a lot of sequences I really enjoyed based on visuals and musical choices, although this becomes less apparent as the series goes on. 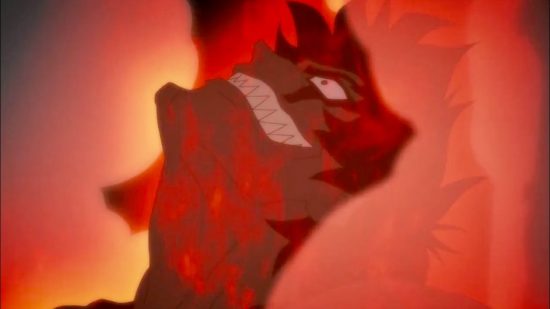 The show ultimately ends on a very final note. Given the events that lead up to it, I don’t think it could have ended any other way. And yet, in spite of the hopeful tone of the final shot, I couldn’t help but be bummed out by the whole thing.

I don’t like getting political on here, but in a time where the world really sucks, I didn’t need to watch this “worst case scenario simulator” to remind me of that fact. Yeah, people suck, I know that all too well, but when it comes to media like this, I’m fed up of bleak, depressing takes on how we’re going to be the orchestrators of our own demise. It’s why I can’t bring myself to watch anymore Black Mirror, despite how much people rave about it.

Devilman Crybaby isn’t a bad series. There are a lot of things to appreciate in it, and after spending this time writing about it, I have come to respect aspects of it even more. It tells a solid story and gets its ideas across very effectively, but it feels heavy handed a lot of the time and while I got the message, I couldn’t get behind it. So I wouldn’t recommend Devilman Crybaby. Critically, it’s probably a good show, but it wasn’t something I enjoyed watching. It felt too aggressively violent and sexual, all used in a negative context. And my overall feeling of being brought down by it outweighed the things I liked about it. So to cheer myself up, here is a gif of the silly run the devil people liked to do.