While there have been no bad episode of the Mandalorian this second season, there has certainly been a trend of a very exciting episode being following by a good, but not amazing one. “The Jedi” certainly continues that trend by being one of the best episodes of the show in its entirety so far. Reintroducing a much anticipated character into the show while also giving us some genuine backstory the Baby Yoda himself.

Which means that might be the last time I playfully refer to “The Child” as Baby Yoda.

Much to my own surprise, the episode opens with an action sequence that introduces Ahsoka Tano to the series. I was almost certain she would be an end of episode reveal. But nope, we get to see her in all her powers, taking out a group of gunmen in a burned-out forest right from the begining. Eventually coming face to face with the settlement’s leader, known as the Magistrate. The two give each other ultimatums before Ahsoka leaves.

Meanwhile, Din arrives on the planet and finds himself at that same settlement, finding it full of fearful, downtrodden people. It doesn’t take long before he finds himself having an audience with the Magistrate. Who, upon realising he is a Mandalorian tries to hire him to kill the Jedi plaguing their town. Offering him a spear made of pure Beskar as payment. Slyly, Din simply asks for the location of the Jedi without agreeing to anything.

Although it’d be safer to say that Ahsoka finds him rather than the other way around. We get a brief, but very cool battle between Din and her. Without his Beskar, Din would have been dead several times over by now, as he uses his armour to block her Lightsaber strikes. Showing that Mandalorian Iron is still the perfect counter to a Jedi. Although in the new continuity, I suppose it’s Mandalorian Steel now.

When everything is calmed down, Ahsoka telepathically communicates with The Child and we get a whole bunch of exposition about the youngling. Most notably of which is his name: Grogu. We learn that he lived at the Jedi Temple in the years leading up to the Clone Wars, where he learned from many Jedi Masters. During the purge, he was taken away and hidden, spending the following 20 years in darkness and fear.

While Din is insistent that he leave Grogu with Ahsoka, I always knew that she would never take the child on as its protector. Following this exposition, we get a little test scene in which we see just how much of a connection Grogu has forged with Din. To which Ahsoka parrots the lines many other master character have before her, saying that Grogu’s connection to Din is too strong, and could lead him down a path to the dark side if he continues his training in the force.

Although, to her credit, she’s seen how that exact thing can happen first hand. 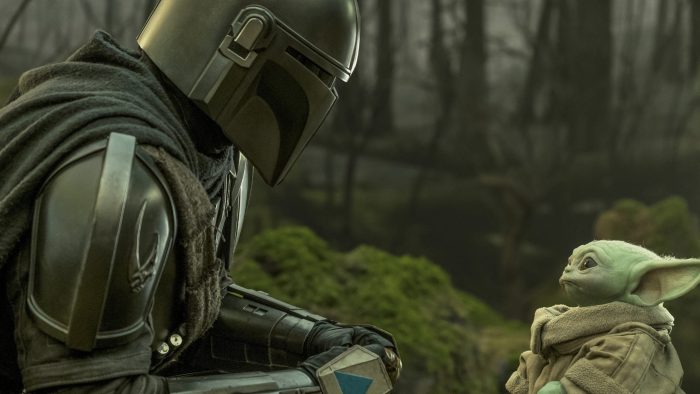 Interestingly, Ahsoka makes no mention of her status as still being a “Jedi” or not. After leaving the order, Ahsoka ceases to be a Jedi in her own mind, and yet never bothered to correct anyone when they refer to her as such. Then again, there’s a lot of this character I haven’t seen yet. So I’ll not linger on this anymore.

As the time of Ahsoka’s ultimatum to the Magistrate approaches, Din admits that he was sent to kill her and offers to help him liberate the settlement. The result of which is a fantastic action sequence of Ahsoka and Din laying siege to the settlement and ending with two separate showdowns. One between Ahsoka and the Magistrate, while the other is Din vs her head stooge Lang, played my Michael Biehn.

It’s really cool, and I can see where the show is leaning into its roots more than ever as a result. Inside the Magistrate’s compound, we have her duelling Ahsoka using the Beskar Spear, on a thin walkway surrounded by water. Just just about as “samurai” as I’ve ever seen Star Wars be. While outside, Din and Lang face off against one another in the dusty town, hands flexing alongside their blasters. Which is just about as “western” a scene as I can imagine. It’s fantastic. Resulting in both of our good guys defeating their respective opponents and liberating the town. Although, it wouldn’t be hype enough if there wasn’t one more good bit of fan service to end the episode. While Ahsoka has her opponent dead to rights, she demands the location of her final quarry: She wants to know where Grand Admiral Thrawn is.

Which was super exciting to me as a reader of the older books about Thrawn, without even having seen Rebels, in which he is a major character. It makes me wonder, with the Emperor dead, is Thrawn now the leader of the Imperial Remnant. And is Ahsoka is out to dismantle their leadership bit by bit until the Empire is no more?

The episode ends with Din making his goodbyes to Grogu, before Ahsoka tell him that he’s like a father to the Child. And that she refuses to train him. Although she gives him a further task for his journey: to travel to the ancient Jedi world of Tython in the galaxy’s deep core. There Grogu can attune himself with the force at a point where its very strong and decide his own future.

Also, Din gets the Beskar spear, which is cool. 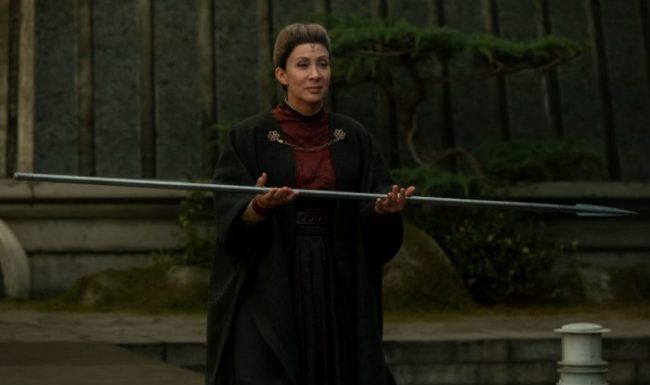 This episode was amazing on so many fronts. While the series has done a fantastic job of making it still feel like Star Wars with nary a Jedi to be seem, having one included in the series is a major treat nonetheless. It also occurs to me that there is no reason this Jedi needed to be Ahsoka, in terms of the story told, it could have been any surviving Jedi/former Jedi, but the fact that it was Ahsoka adds this extra bit of fan service that makes all these stories feel like one big connected universe. Which is why I always loved the stories of the franchise in the first place.

It was also interesting seeing the Jedi from an outside perspective for the first time. Din knows nothing of the Jedi, and yet encounters this Togruta woman who is able to do impossible things, like read the mind of the kid he’s spend the best part of the past galactic cycle palling around with, revealing things about him he didn’t even know.

I loved everything about this episode, and furthermore it filled me with excitement for where it could go now. The whole crux of the ending of the first season and the first chunk of this season was to find the Jedi and return Grogu to his own kind. Although, at this point the question becomes less of returning Grogu to the Jedi, and more of letting Grogu decide where he wants to stay. Meaning that the foundling might remain with Din and become a full Mandalorian rather than a Jedi in his future. (That’s actually the most likely outcome in my mind)

I have no idea where we’re going next, but with Moff Gideon still tracking the Razor Crest, Grand Admiral Thrawn revealed to still be alive and both of them still having interest in Grogu, it’s only a matter of time before Din finds himself having a major confrontation with the Imperial Remnant and also having to decide his own future along the way. I just find myself wondering how many of the characters introduced along the way in this season are going to be making their return for the finale?

I know I’d certainly like to see more of Ahsoka before this season is over.

2 thoughts on “The Mandalorian Season 2 Review – Episode 5: The Jedi”