This show was dumb as hell. Yet, somehow it got its claws into me. Was that pun intended? I don’t even know anymore.

Seton Academy: Join the Pack! is one more harem romantic comedy anime added to the longass list of anime of this genre, with a few key differences though. For one the main, male protagonist, who is normally a clueless, hopeless dolt who couldn’t read the room if it had bloody scribbles all over the walls is replaced with a real asshole.

Jin Mazama is one of two human students in a school full of anthropomorphic animals, all of which seem to have a unique kind of sexual dimorphism in which all the male animals look like creatures they’re supposed to be, stood upright and crammed into a purple uniform, while the girls all look like regular anime waifus, just with some ears and possibly a tail.

Jin also has the misfortune of being a massive douchebag, one who hates all non humans. So I guess that’d make him speciesist rather than a racist. That means that the usual trope of the protagonist getting flustered and mixed up from all the misunderstandings that go on is not present, as Jin just hates everyone.

That doesn’t stop him from gathering a variety of different female animals around him, willingly or not, in the cooking club he formed to be close to the only other human in the school and object of his affections/lust; Hitomi Hino. And as he gathers his harem, most of the members seem to be in love with him for some reason or another.

What makes it more tolerable for me though is that Jin hates them all, and is actually the tsundere love interest that needs to be won over. For the most part though, the show is more comedy than romance. Using the different traits and characteristics of these animal species and injecting them into situations as a jumping point for various plot lines, which all turn into a series of wild antics that usually end up causing the cooking club some kind of grief. 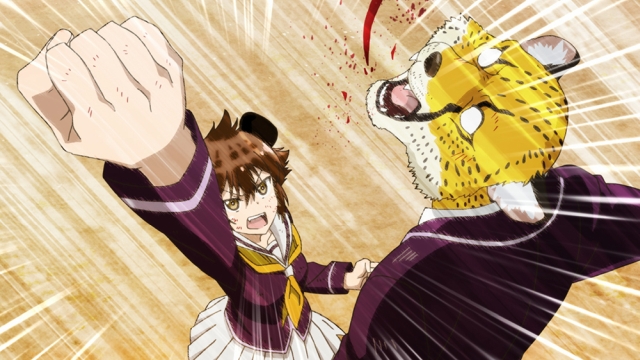 Normally, this kind of show would just come and go, but for some reason this one kept my interest. The characters are all charming and silly, and the message underlying it all isn’t one of a usual harem romance. Rather, instead it promotes one of inclusiveness and acceptance of one another despite the differences between us.

Thus Jin ends up not actually factoring into every story despite being the “protagonist”, sometimes it focuses entirely on the other characters as they overcome some small personal hurdle and become closer with everyone around them. Despite the silliness and fan service surrounding it all, there is a good message at its core.

Plus, despite Jin and Hitomi both crushing on one another (Hitomi’s feelings are much more apparent in the manga than they were in the show apparently), you know that it’s Ranka; the little pink gremlin wolfling girl that’s slowly managing break down his tsun barriers and make Jin stop acting like such a human supremacist.

Which he isn’t, when it comes down to it he does pull his weight to help his “pack”. He’ll just harumpf and act indigent about it afterwards.

And there’s not much else to say about Seton Academy. It’s a silly show with its fair share of fan service and waifu bait, but it’s not just about a hapless hero having a ton of girls all falling in love with him. It’s about a bunch of kids of a different species and showing how they can all come together and be friends no matter how different they are from one another, no matter gender identity, age or race.

Lion or Impala, Mammal or reptile, living or extinct. There’s no reason we can’t all work together… Although, how can you be an extinct species if you’re stood right there lamenting the fact that you’re extinct, and what exactly are they all eating? are kids that fail classes getting carved up and served as lunch to the carnivores and why is Ranka so smol when her sister is…

One thought on “Seton Academy: Join the Pack! – Sometimes a little junk food can go a long way”