Adi Shankar’s retelling of the Castlevania lore has come a long way since its initial premise as a live action series that seemed more Underworld than Jojo’s Bizarre Adventure. The first two seasons were a loose retelling of the events of Castlevania III: Dracula’s Curse, with that book closed and Dracula dead, the path was completely open for where Shankar would choose to take his series for its inevitable third season.

Despite what you may think, the second season for the most part felt like Alucard’s story. With Trevor Belmont being little more than a highly competent comic relief figure. When I spoke about that second season at the time, I drew direct comparisons between Alucard, Trevor and Dracula and Luke Skywalker, Han Solo and Darth Vader.

After Alucard killed his father and ended the immediate threat against humanity, the second season ended with a nice little bow on it. It was up in the air as to whether we’d continue following these characters and their stories or we’d get the time skip and follow some descendent of Trevor and Sypha facing off against the resurrected Dracula. 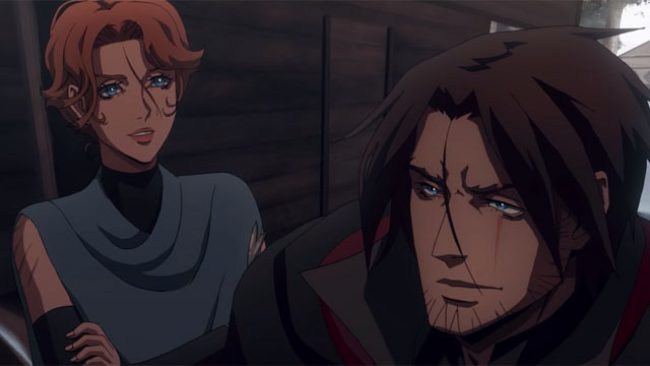 As it turns out, we’d be getting the former of those two options. This time, instead of drawing inspiration from the original Star Wars trilogy, the new season would pull from another popular franchise; Game of Thrones.

I’m not going to plant a flag and say that’s definitely what Shankar was going for with this season, as the previous two also had a number of focus characters, but these ten episodes follow all the players from the previous season as they break up and make their ways on their own separate journeys. Thus we follow four major plot threads which, as of right now, have nothing to do with one another.

First we have Trevor and Sypha as they arrive in a village plagued by a gang of sinister monks, then there’s Alucard who is dealing with his solitude and the training of two Japanese would-be monster hunters, Hector and his imprisonment by Carmilla and her three Vampire sisters and finally Issac on his quest globe trotting quest for revenge.

Coupled with the era, setting, tone and level of sex and violence on display, it’s difficult to deny there was some amount of inspiration from Game of Thrones within the creation of this third season of the series, one that feels very much like something setting the stage for a grander story to be told.

Of the four stories, only Trevor/Sypha and Alucard’s feel like they reach a conclusion of sorts, like the end of an episodic adventure before they move onto the next one. Whist Hector and Issac’s stories only feel like the first act in a much longer story. Which makes sense, if the series is going to adhere somewhat to the timeline of the video games, then these events will be more closely covering that of the 2005 Playstation 2 game; Curse of Darkness, which stars Hector as the player character and Issac as the primary antagonist.

Like the previous seasons, this is a show intended for more mature audiences. At least in terms of physical age, in many ways there is an immature glee to the levels of gore and violence on display here. Something I forgot about in the year and change since it was last on, was how good the show’s art direction was. Using Ayami Kojima very distinct character art as reference and basis for the designs and locations, making this show look amazing when it feels like. 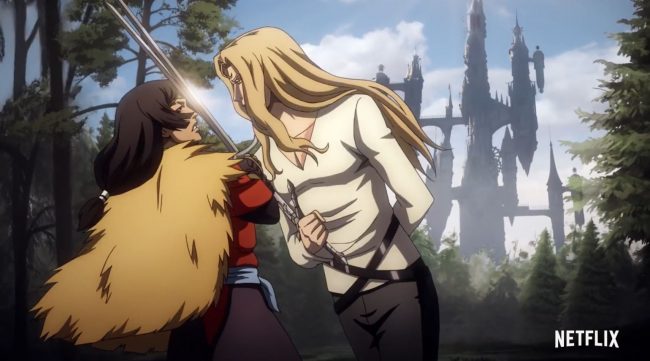 The one thing I did remember about the older seasons was how very stilted it was in terms of both the character animation and voice acting. Before you get angry with me, hear me out. Approximately 65% of this series is mostly people standing around and talking, and during these parts, the characters seem very stiff and un-emotive. Coupled with some uneven performances, it comes off as an amateurish style of “tell, don’t show” to the storytelling.

Which actually fits in just fine with the anime inspired approach and visual design of show. And as much as I love Bill Nighy and Jason Issacs, the characters have this tendency to mumble exposition to themselves at all times in a way that comes across as… well again, very anime,

But when you get to episodes seven onward, the reasons for the slow and stilted animation become pretty apparent, they were saving all of their juice for the big finale. As the animation takes a big step up for the final action sequences of the series. Trevor and Sypha assaulting the mad monk’s church steps things up that gave me a slap in the face to remind me why this show was worth watching. Trevor’s battles against the monks the demons that precede and follow look so good that they seem almost rotoscoped.

And Sypha continues to be amazing to watch in combat as the writers continue to come up with creative and visually stunning ways for her to use her magic to decapitate, impale and crush anyone who would dare come at her. More impressive than that though is Issac’s assault on a city of mind control slaves with his own army of night creates.

One that culminates in all of the slaves becoming a giant amorphous ball of bodies that become this terrifying cosmic horror looking monster, one of the many nods to creatures from the video games too. While these two visually amazing action sequences are taking place, the other two protagonists are both in the middle of sexual encounters, ones that both end in betrayal. One fairly predictable, the other not so much.

Which is why it reminds me all the more of Game of Thrones, while there is no actual throne to fight over here, the whole story is one of leadership, love, violence and betrayal. With people using any and all means possible to get what they want, putting other characters into worse and worse situations, regardless of how much we, the audience, like them or not. (Seriously though, Hector is a freaking dumbass.) 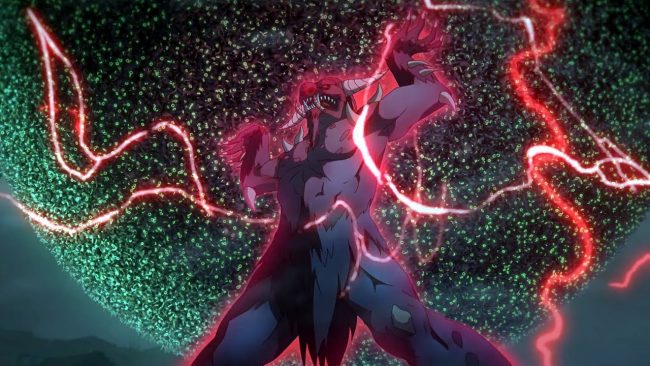 Castlevania seems like a series that is not going anywhere, settling itself in for the long haul as the events of this season set up a probably long future of stories to be told, both with these characters and whoever comes after them. It could be another 2, 3 or 4 seasons before we see a Simon Belmont show up, if at all. But there is a space for a gothic, mature fantasy series on people’s T.V.’s right now and Castlevania fits the bill as well as anything else could.

Please don’t correct me about whether this is or is not anime, I don’t care.