For all of us, there are video games out there that just kick you right in the nostalgia. Games that you think back on fondly that take you back to certain time in your life, and some decent portion of these games are ones you should never actually go back and play. Now I’m not going to say Theme Hospital doesn’t hold up or anything, but some games are very much of a time and being dragged into the stark daylight of the modern age isn’t always flattering.

Which is why it’s great that all of these nostalgic darlings are getting remakes and spiritual successors, games that evoke the feel and themes of older games while updating them for a modern and more sophisticated audience. As much as don’t want to refer to the typical video game fan as a sophisticate.

Which is how we get Two Point Hospital, a game made by Mark Webley and Gary Carr, who former Bullfrog developers who worked on both Theme Park and the the original Theme Hospital in the 90s. A sequel to the original in every respect except the name.

I was shocked to discover, this game didn’t get started through crowd funding, as most projects of this nature tend to. Instead, the developers approached Sega and as it turns out, there were a lot of people out there who were itching for another game in this style. And the game came about through a relatively normal approach that allowed them to put the game out when it was finished as opposed to using early access. The game came out on PC last August, but didn’t see release on consoles until this last month, which is where I played the game.

Two Point Hospital follows the structure of its predecessor; you take on the role of a hospital manager. Moving from location to location, dealing with cumulative challenges and mechanics introduced with each new hospital. The game is a management sim at its core, dealing with building the various diagnostic and treatment rooms, hiring staff and placing the necessities of keeping the patients happy, healthy and not dying during the hundreds of days they spend in your hospital.

Which is one of the more subtle gags that really is the core appeal of this game; The humour. As running a hospital in reality can feel a rather dour and depressing task, the game is jam packed with things to lighten the mood. From the weird illnesses and their treatments, to the disinterested receptionist over the PA system and the very quintessential British radio DJs all add to the overall charm of the game.

After getting about half way through the game, I realised that there is a definite loop to gameplay. You start by building your essentials; a reception and a GP’s Office. As well as necessities like toilets and staff rooms. As you progress deeper into the game, more ailments start popping up, meaning you need to build more general and specialised diagnosis and treatment rooms to deal with the increasing variation of need of your patients.

It’s not just the patients through, different hospitals have different handicaps that require you build training facilities, research departments and marketing campaigns to make up for the shortcoming of certain locations and achieve the various goals required to get the three star ranking for each hospital along the way.

Playing the game on console is surprisingly not bad, I got the game through Game Pass and the building and control functions on a controller work a lot better than you might expect. The game is one many would prefer to play on a PC, but it works very well on console for me, and personally hunching over a PC for the amount of time these games end up taking makes my back hurt just thinking about it. 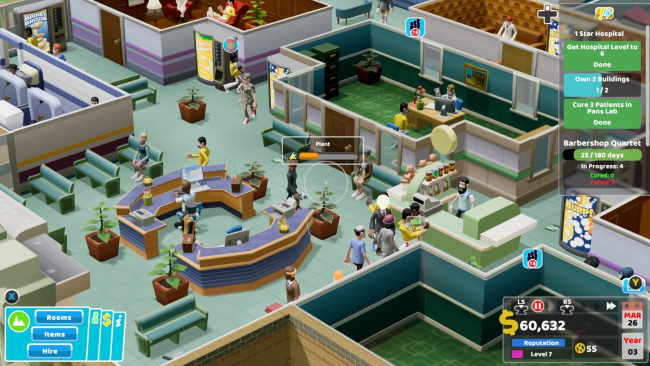 Overall, the game is bright, charming and throws new and interesting mechanics and scenarios at you right up until the end. The biggest downside for me is that a lot of the time, I felt like there was a point at which I could set my controller down and let it play itself for 30-45 minutes until the progress bars filled up enough to finish the requirements for three stars on each level.

It’s why I’m about 60% through the game and have decided I don’t need to see any more of it. I’ve got to the point where the game isn’t introducing new mechanics anymore and is instead throwing weird scenarios at me and forcing me to use all I have learned to overcome them before moving onto my next challenge. But there in lies the problem, the game really lacks said challenge.

The only tricky parts of the game I’ve found so far at the early parts of each stage, juggling the need to buy more facilities and staff with how much money I’m earning at any given time. After you get past that initial hump and patients start coming into the hospital at a pace you can’t keep up with anymore, money ceases to be an issue and it just becomes an exercise in keeping the requirement bars even and building a new room anytime one gets too busy.

I’ve yet to come to a point where I found the need a take out a loan, and as far as I’m aware, there is no fail state to each hospital. (Or I’ve just failed to encounter it) After a certain point, you’re making money hand over fist and that’s when you just crank up the speed to max and allow the game to play itself while you wait for whatever requirement pops up to get the two and three stars for that hospital.

I’d occasionally accept a challenge or promote a staff member, but for the most part I felt like the game becomes almost entirely hands off for 66% of the time you’re playing it. Thus you find yourself in a position of just repeating the same processes each time you arrive at a new establishment, building the same patterns of receptions, waiting areas and several thousand GP’s Offices. Pride in layout and decoration of your custom creation ends losing its appeal when you know you’re going to leave and not come back after the third establishment.

I suppose that’s what comes with my personal need to get all three stars at a location rather than moving on once the hospital was at a point where I didn’t need to tend to it anymore. But as the hospitals continued to grow and get busier and busier, individual care became impossible as each location became a swarming ant’s nests of staff and patients all buzzing around from poorly placed room to poorly placed room.

Which might be a sadly accurate commentary on my own NHS at this point. But let’s not get into that.

Two Point Hospital is a game packed full of charm and character. While not as in your face as Theme Hospital was, there is a very British feel to it all, from the layout and towns on the world map, to the radio DJs and the types of illnesses people are suffering in the game.

And for the first six or seven levels, the game is a ton of fun. After which point becomes an experience of diminishing returns for me. I don’t see myself finishing the game right now, although I could see myself going back to it after a bit of a break. But the game ends up feeling repetitive and lacks difficulty in all honesty, I ended up brute forcing my way through difficult financial situations with little to no repercussions no matter how unhappy the staff or patients became. 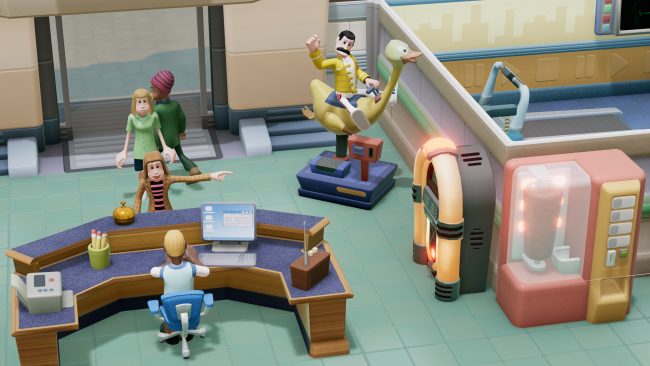 But if you’ve got Game Pass or any nostalgia for Bullfrog’s original “theme” games from the 90s, I’d recommend Two Point for the charm and tone alone. And as much as I’ve ragged on it, it is fun to play, but maybe coming back to it every week or two is a better approach than simply sitting and knocking off hospital after hospital.